Looking back: Need a new carriage?

The Manwaring twins operated a carriage manufacturing company at the corner of Main and Second streets in the late 1800s. Hezekiah and Bradley Manwaring also were blacksmiths.

They moved from their native state of New York to Danville in the mid-1800s and set up shop on Third Street across the street from Second Presbyterian Church.

They offered to manufacture carriages to order and also keeping some on hand to sell, according to an 1861 advertisement in an edition of the Weekly Tribune.

The company also made buggies and rockaways of the “best material and built by the best of workmen.”

The Third Street shop was later owned by Tim Murphy.

The Manwaring brothers moved their business to Second Street and were associated with Cresent Carriage Co. They also did repairs “at prices to please my customers,” said

Hezekiah, the agent, in the advertisment.

In 1859, an advertisement stated the company had the “best painters in the Western country.”

Hezekiah Manwaring was born July 28, 1828, in New York state and died from pneumonia on Sept. 29, 1913, in Danville. He was 85 years old and one of the oldest men in town. He is buried in Bellevue Cemetery.

His children were Frank B. Manwaring and Hezekiah Manwaring III.

Hezekiah was a son of Hezekiah Manwaring Sr., of Troy, New York and a widower at the time of his death.

A deed filed in October 1912, a year before Hezekiah died, shows he sold the carriage property at the corner of Main and Second streets to Hattie Henson. She paid him $1,068.

The deed also showed that that Henson had been his caretaker for sometime prior to his death.

The document also stated the invaluable nursing and care (for Manwaring) was done without pay and of faithful and never tiring care at all times which could not have been exceeded in kindness and patience and had she have been a daughter, and further of his wish and desire to provide for her to some extent after his death, she having done for me in my old age more than any other persons would have done.

Manwaring until his death and he would continue to live at his property.

east by property of the catholic Church, south by Main Street and west by Second Street, all the property and improvements he owned south of Arnold’s property to Main Street.

The property was bought from T.P. Young and wife in April 1869 by Bradley Manwaring and willed to Hezekiah when his brother died.

The 1880 Census shows he was married to Harriet Manwaring, age 43.

The 1900 Census listed Bradley and his brother, Hezekiah, living at Second and Main streets.

In 1850, Bradley, 23, was living in Massachusetts, in the household of John Bedatrax, a carpenter.

A draft record for the Civil War, listed Bradley, as single, and registering n Boyle County. 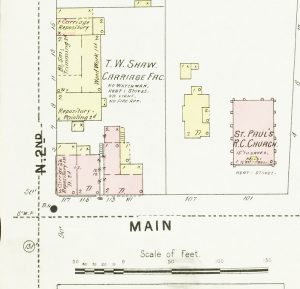 An 1896 Sanborn map shows the site of the Manwaring Carriage business in the left bottom corner at Main and Second streets. 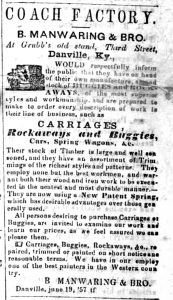 An advertisement on June 18, 1857, shows information about the Carriage Company. 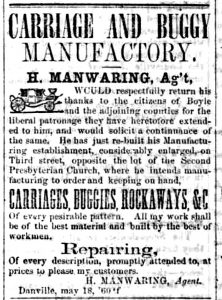 A thank-you advertisement from the Manwaring Carriage Company published May 18, 1860.