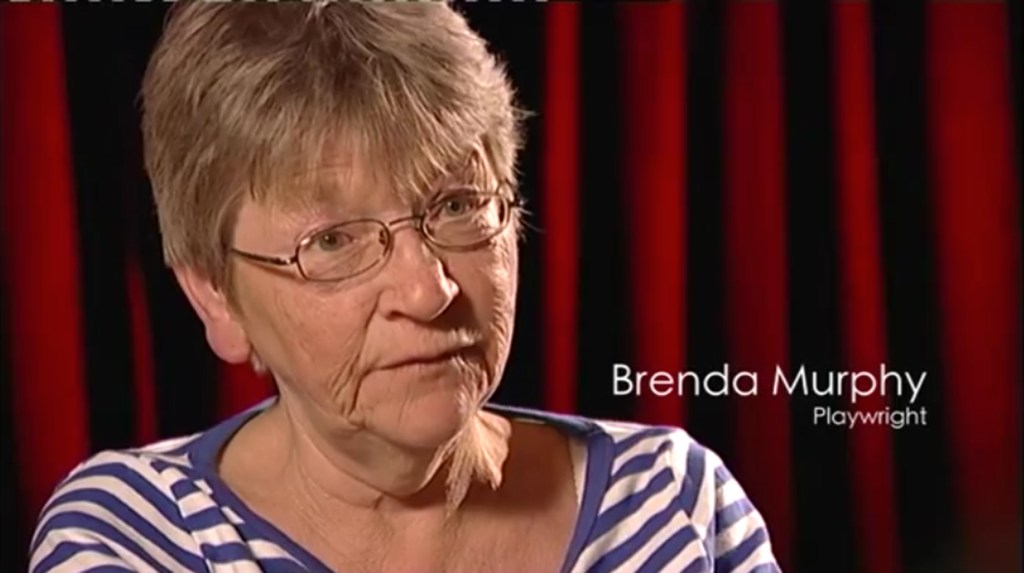 Scarlet Cup Theater’s founder, Liz Orndorff, knew she wanted to play off of the connection between Danville and Northern Ireland for one of its pop-up performances — but she didn’t know exactly how. Carrickfergus, Danville’s Sister City, has hosted groups from Danville as well as sent others here in various exchange programs.

“This entire thing has been quite serendipitous,” Orndorff said of finding “Two Sore Legs,”  a one-woman show in which the actress depicts several characters, written by Brenda Murphy out of Belfast. She saw several incredibly favorable reviews of performances, but finding Murphy in order to proceed didn’t happen over night. 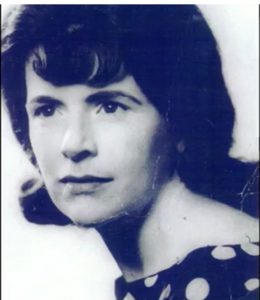 A photo of Bridget Murphy, playwright Brenda Murphy’s mother who “Two Sore Legs” is based on.

Murphy’s play is unpublished, so Orndorff set out to contact her. It took roughly six months, lots of connecting dots between acquaintances, and finally the puzzle pieces began to fall into place.

Based on the life and stories of Murphy’s mother, Bridget, the play opens up as she speaks to the audience during her own wake.

“She said her mom told her she should write a play about her, and a shortly after she died, she finally did,” Orndorff says. Murphy is the oldest of nine kids — six of which her mom had out of wedlock after falling in love with a married man.

“This was 1950s Belfast,” Orndorff said. “This didn’t happen. Birth control was illegal, and the church was really powerful.” Bridget, portrayed as a very strong woman, had been castigated her entire life for her actions, Orndorff says. Yet she was still warm and loving with a huge heart, and full of nothing but love for her children — all of them, even the “bastards” as Bridget’s father is quoted at saying quite often in the script.

“This is a realistic play, so there is some language,” she says. Although a drama, going somewhat into Bridget’s memory of the war-torn past of Belfast, there are enough comical situations to keep it laughable, Orndorff points out.

“It’s all told from her mother’s perspective, and just to get a glimpse — to see inside this window into this happy life … she did live a happy life — it’s just amazing.”

Tony Haigh, professor of dramatic arts with Centre College who is on Scarlet Cup’s board, says he finds the underlying themes of the story very realistic. “The post-war era, in an industrial town of Belfast is very similar to Manchester, England,” Haigh says, referring to his homeland.

Orndorff says she had some interesting conversations with playwright Murphy, who isn’t able to travel to the states for the performance unfortunately, and she knew she needed a solid actor to stand up to the script. Haigh recommended Orndorff che

ck out someone he directed at Lexington’s Actor’s Guild in “Who’s Afraid of Virginia Wolf” — Sharon Sikorski. Sikorski, who moved to Kentucky from Texas years back and graduated from Asbury College, has appeared in central Kentucky theaters for 15 years now, including Woodford Theatre, Studio Players. She considers Kentucky her home, she says.

“I would have never gotten to play a father or a priest without this role, probably,” Sirkorski says. She laughs, but it’s easy to tell — she’s ready for the challenge. She gives a line from the play, one of her favorites, in her newly learned Irish accent — and it’s dead on. She takes a compliment about the accent humbly, saying those from Ireland would know better; but she has the flavor, she says. She had some help from Haigh on the accent, as well as listened to television shows set in Ireland. She talks of how the “r’s” are accented harder in Belfast, what some phrases mean (“craic,” pronounced as crack, means good fun, for example) and how she worked with her tone inflection.

“This play is very rich. It’s about life, it deals with birth, death, relationships. But a lot of funny stuff, too. That’s the way life is — you get through it due to the laughter,” Sirkorski says. “I think Brenda (Murphy) was trying to understand her mother more by writing this. Her love for her children shows through, and her big heart.”

Keeping in spirit with the Irish flavor, “Two Sore Legs” will welcome lots of Irish food and drink the nights of performances, being performed cabaret-style at Mallard’s restaurant. Special items, like Guiness cheesecake, shepherd’s pit and Dublin coddle — a supper dish of sausages, bacon, onions and potatoes — will be available for dinner.

“This is an important time/space situation,” Haigh says, adding what better way to celebrate a wake full of stories than with pints of beer.

Audiences are encouraged to arrive an hour to 45-minutes prior to the performance to have dinner, but drinks and other libations will continue flowing throughout the run time.

Brenda Murphy has written more than 20 plays, all which have been produced, including co-writing “A Night with George,” about a woman who spends the night telling stories to a life-size cutout of actor George Clooney. In an interview with followingthenerd.com, multi-award-winning playwright Murphy said she has no formal training and gets most of her inspiration from something she hears in a pub or from people she talks to. The website quoted her as saying: “For instance, my last play A Night With George came from a story about a woman who was drunk at a Garth Brooks gig and stole a life size cardboard cut-out of Garth and brought it home with her and spilt her heart out to it. I simply changed it to George Clooney and went from there. 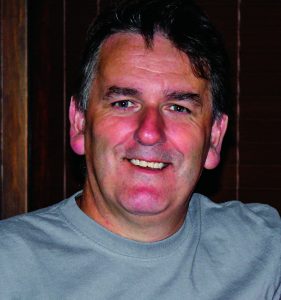 Irish actor and singer Kieran Cunningham, last seen locally in “The Search for Tinker Doyle” at Pioneer Playhouse, will host each performance of “Two Sore Legs.” Cunningham will also perform a few gigs around town during his stay. Director Liz Orndorff says Cunningham’s voice is “incredible.” Appearances will include the Boyle County Public Library at 3 p.m. on Oct. 9; Brothers BBQ at 6 p.m. Oct. 11; and Jane Barleycorn’s Market and Bar at 8:30 p.m. Oct. 14.