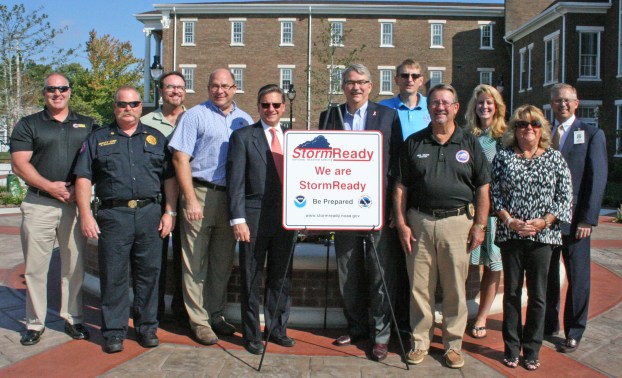 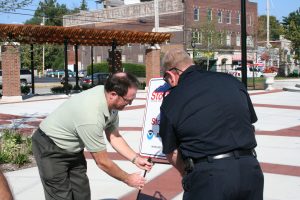 Danville and Boyle County were designated a “Storm Ready” community by the National Weather Service in a ceremony Monday at Weisiger Park.

“There were a lot of hoops to jump through,” said Joe Sullivan, a warning coordination meteorologist with the National Weather Service.

Danville-Boyle County Emergency Management, Danville Fire Department and the Boyle County Safe Communities Task Force combined efforts to meet the requirements for the designation. Requirements for the certification included completing a 15-page questionnaire, making sure there were adequate shelters in case of storms, installing rain gauges, and touring the office of the National Weather Service, among other things.

“Except for the documentation, we had already been doing all of it,” Danville Fire Chief Ken Pflug said. 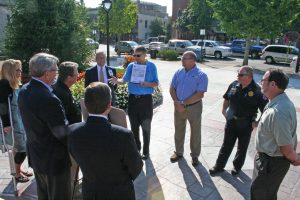 Kendra Peek/kendra.peek@amnews.com
John Gordon, meteorologist in charge at the National Weather Service in Louisville, shared with those present the number and locations of tornadoes that have swept through Boyle County since 1870.

Having a connection with the National Weather Service has proven more than helpful this year, Wilder said, as he was able to receive hourly calls about the weather during the Kentucky State BBQ Festival. He plans to use that service with the Perryville Battlefield Commemoration weekend this upcoming weekend. 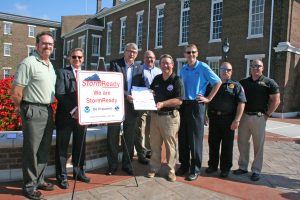 A fire broke out early Monday morning in an unoccupied home at 1101 Argyle Dr. in Danville.  According to Danville... read more