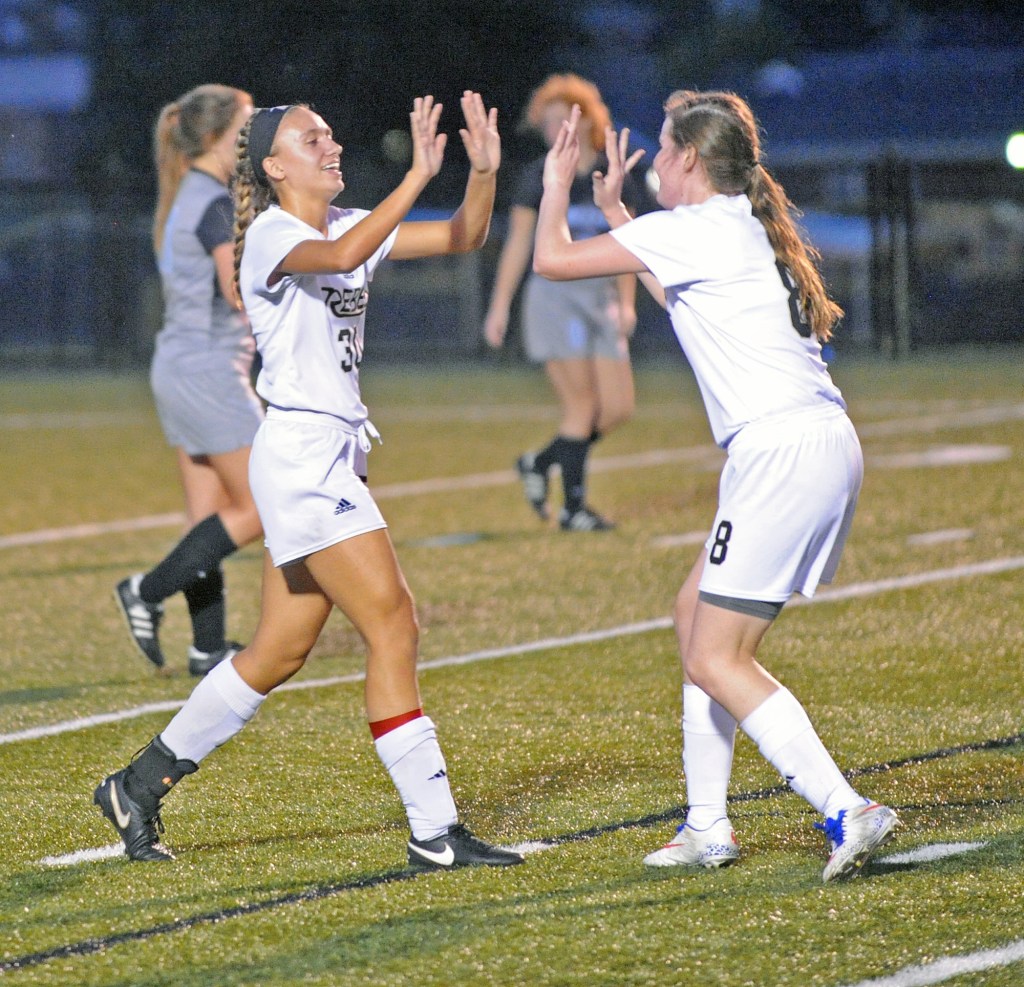 Senior Kylie Thompson (left) celebrates with teammate Nicole Everman after scoring her first of four goals for the Rebels. Boyle won 9-1 against Collins on Senior Night.

The Rebels’ senior class has been doing a lot of that.

Down from 13 members since the start of their high-school careers, five seniors took the field for the final time at home on Tuesday as Boyle thumped Collins 9-1 on Senior Night. For the seniors, it was their 74th career win.

“This senior class is special,” Deem said. “I had a majority of them when they were in eighth grade, they came out and played JV for me. With postseason, the way it’s set, there’s no possibility for them to ever play another game here. It’s emotional time for them, and that’s a good thing.”

Deem said they all brought something different to the team.

“Kylie is more of the lead by example, she doesn’t say a whole lot, she just goes out there and goes to work,” he said. “Emmie Harris is kind of the alpha dog, so to speak. She’s willing to take the heat when things don’t go right and she’s willing to have the tough conversations when we need to fix things up. Eli is obviously our vocal leader. She’s the one that brings the energy, the attitude and the excitement to practice.

“Mercedes and Robi, both, what I’m most impressed with them is those are kids who wanted to be a part of something special. It wasn’t about playing time, it wasn’t about anything more, other than a love of the game, love of the girls and they loved the program and they believed in it. To me, that speaks bigger volumes than if you were a starter. They’ve gone four years and they’ve bought into their role, they believe in the process, they believe in what we’re doing and they want to be a part of something special, and they are.”

For the players, the final home game was emotional, but they’re still focused on the task ahead. The Rebels are the No. 1 ranked team in the state according to MaherRankings and will look to earn that ranking in the coming weeks.

“It’s very emotional, but we have to keep looking forward, keep pushing like we have all season and prepare for the next game, get our minds right,” Harris said. “It’s tough, but we’ve got to move on.”

Thompson, who scored four goals for the Rebels on Tuesday, said having that final home game behind them “doesn’t feel real.” But the postseason is right around the corner.

“It’s exciting to know that we still have that opportunity ahead,” she said.

Lyons said the bond between teammates is something that made their final game at Rebel Stadium something to remember.

“We all love each other so much,” she said. “Our team chemistry is so good this year. That makes it 10 times harder to leave this field and the team, but we have postseason. We’re really excited for that.”

Phegley and Robinson both said starting on senior night was a thrill. Each player came close to scoring at the end of the game.

“It’s exciting, being able to start and play your senior night,” Phegley said. “Senior night is supposed to be, we have the whole team but the focus is on you guys. It’s really exciting.”

“It’s phenomenal, we all just have faith and trust in each other,” she said. “You yourself might be nervous but everybody on the team is there for you, so it’s exciting, loving. It’s just a great atmosphere.”

That winning atmosphere has been built by a team unified in one goal, Harris said.

“I know for a fact that our whole team has the same goal, all of us,” Harris said. “It’s not questionable between anybody. We all want to get to the end.”

From here on, it’s game by game and practice by practice, Lyons said.

At the beginning of every day, every player is focused on the same goal: Winning the day.