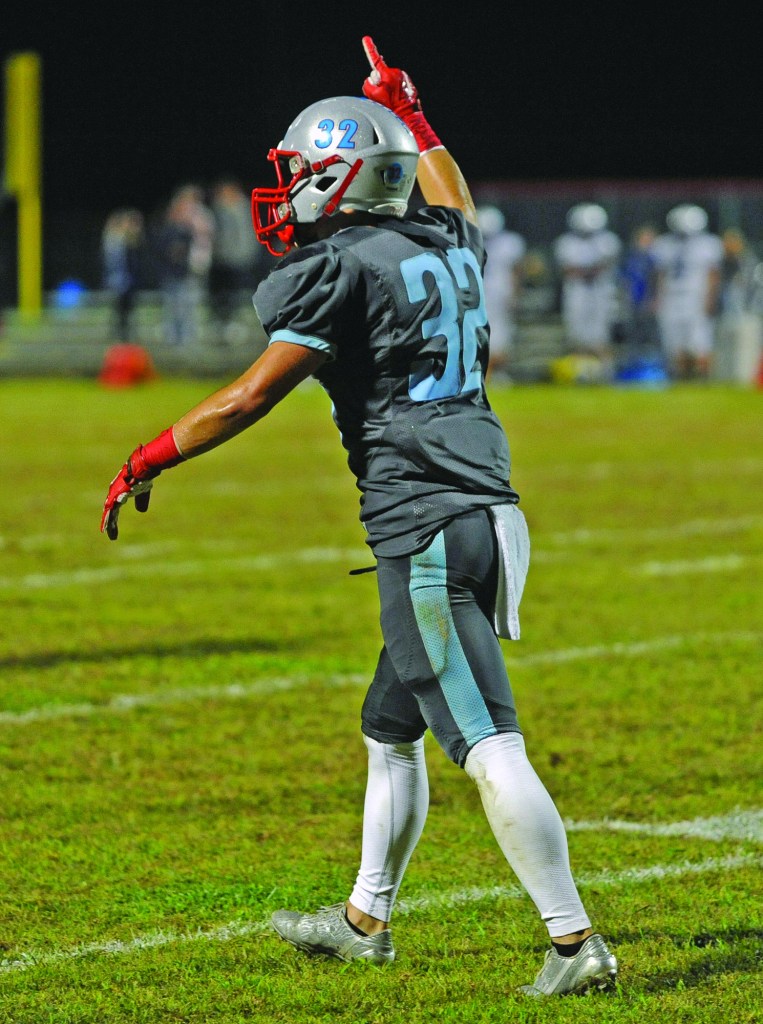 Matt Overing/matthew.overing@amnews.com Collin Miller celebrates after Casey County scores a touchdown against Bell County. The Rebels have been doing a lot of scoring this season, putting up 261 points through six games. Casey is one of two undefeated teams in Class 3A.

The pair have a special bond on and off the field, but on it, they have been dynamic. Hayes has completed 99-of-131 passes for 1,611 yards and 16 touchdowns. Miller averages 17 points per game — yes, we’re talking football. He’s scored 17 times this season through six games, gathering 207 rushing yards on 22 attempts and racking up 639 receiving yards on just 24 catches. 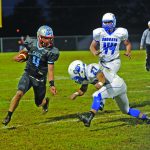 “Those are obviously two huge playmakers,” Casey coach Steve Stonebraker said. “Breece does such a good job within the offense of reading his keys and delivering the ball on time. Collin, with his athleticism, obvious playmaker and can score in so many ways. He’s versatile enough to play running back, play receiver and he even threw a pass (Friday against Bell County). He’s a top-notch playmaker. They’re both great kids, too, both fantastic young men and hard workers.”

That hard work has the Rebels at 6-0 for the first time ever, and there have been plenty of firsts this season — most recently, a 53-14 drubbing of Bell County, a No. 6 ranking in the latest AP poll and a first-place vote.

How big can six wins in a row be for a program? You’d have to travel to Liberty to find out.

The hype in Casey County isn’t just around the high school football program. All levels are feeding off of the success Hayes, Miller and the varsity team has had this season.

“You can see the community support that we’ve got, a lot of people are excited about what is going on, and they have played such a role in the enthusiasm that we’ve been able to build with the kids as senior leaders,” Stonebraker said. “It’s just been fantastic overall.”

Stonebraker has as much to do with it as the players, according to Hayes. He’s the one who has built the program back up after having just 18 players at the end of last season.

“He’s just a guy that will do anything he can for us,” Hayes said. “He’s doing everything he can to make it fun for us. When you go from 18 people at the end of last season to almost 50, something is going right. Everybody loves to play for him. The man sleeps like three hours in a weekend, doing film for us. He gives us scouting reports every week. He’s got his heart and soul put into it. He’s like a dad to all of us.”

It sometimes takes some hard love from Stonebraker to get his point across. Against Bell County, the Rebels’ first play was stalled due to a delay of game.

Late in the game, Miller let a punt go over his head and Bell County downed the ball inside the five.

Both times, Stonebraker was livid with his two senior leaders.

Both times, the seniors responded. Hayes would lead a 99-yard drive on the first drive of the game, and Miller’s next touch after his non-punt return went 79 yards for a kickoff return TD.

“He’s done a remarkable job, he’s a great coach,” Miller said. “I love to play for him. He’s just somebody you want to play hard for and do good for.”

All of their success has turned heads inside and outside of the program. That positivity is flowing through all levels of Casey County football.

Hayes said that their goal is to be like Corbin — a dominant force in all of 3A, not just the district.

“We want to be a force to be reckoned with,” he said. “Corbin has run this, there’s no doubt about it, Corbin has run our district. But we want to be the Corbin. That’s what we aim for, that’s why we work winter weights. That’s why me and (Miller) go straight from basketball practice to weights all winter.

“We want to be something that we can be proud of. We want to get the shirts made, ‘district champions.’ But it’s Corbin’s right now, we haven’t taken it away from them. That’s something we have to work toward. Our goal is to come in to them and play a game, play it out. We don’t want to be a team where they see us and think, ’50-0.’ We want to give them a game. We might win it, we might not. But we want them to feel us when we’re on the field.”

Stonebraker’s task now is keeping his team grounded. After the win against Bell County, he emphasized to his players the importance of building on the win instead of resting.

“We’ve got to build off of this,” he said. “This game just sets us up for a lot of things down the road with the first district win. If we don’t build off of it, then it becomes a whole lot less meaningful. We’ve got a lot of work ahead of us and the guys know that.”

Hayes and Miller take meaning from every game they play together. It didn’t take long for Hayes to bring up how they started playing in kindergarten with their dads leading the way.

“It’s great playing with him, we just have a connection,” Miller said. “You don’t know the play, he’s going to be there to tell you. He’s a great leader, just an amazing guy to play with.”

Hayes said it’s a brotherly bond, not just between each other but within the entire team. That bond will continue to be tested this year, with a home tilt against Corbin circled on everyone’s calendar on Oct. 21.

“This is like my brother,” Hayes said, pointing to Miller. “I’ve got two other brothers and I consider him like family. He knows the house is always open. I’ll come home and he’s sometimes just in the house eating my mom’s cooking. That’s just us, man.