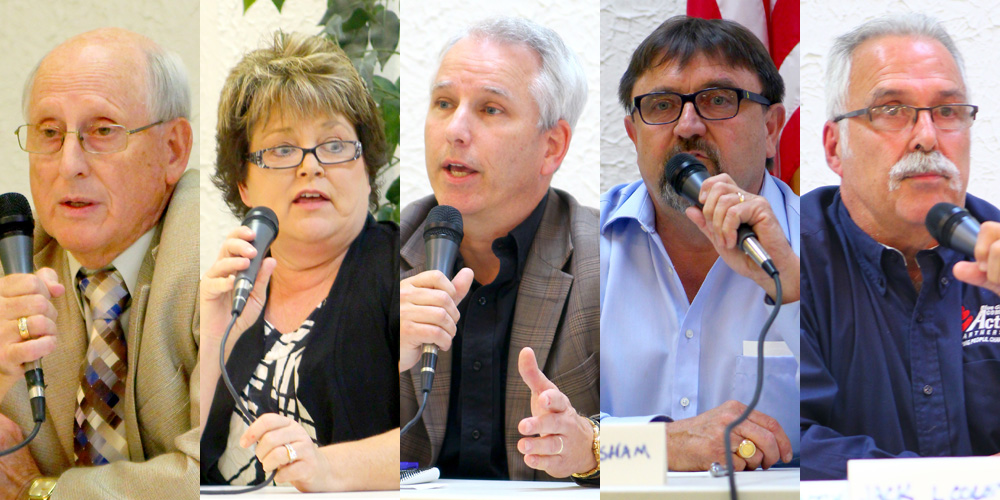 HARRODSBURG — The four seats on Harrodsburg City Commission are up for grabs this year, and there are five candidates seeking to be elected.

Mattingly is seeking his fourth term on the commission. He held up his time working at IBM and managing a $10 million budget that “was balanced every year” as valuable experience. 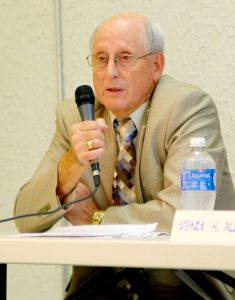 Mattingly said during his time on the commission, Harrodsburg has experienced growth in terms of industry; added new educational opportunities such as Campbellsville University’s Harrodsburg campus; and expanded the city’s water treatment plant.

In response to a question asking what commissioners would do about falling revenues and rising costs, Mattingly said revenue has actually been increasing for Harrodsburg.

“We have really grown revenue … since this commission has taken office,” he said. “We’ve worked hard, we’ve really watched our spending — we only buy what we have to buy.”

Mattingly said drug problems are the number-one issue facing Harrodsburg. As commissioner in charge of streets, he said he knows that city employees find drug paraphernalia on the streets “every day.”

Mattingly said he also knows the city has a problem with storm drains — a problem that is slow and expensive to fix.

“It seems like when you get one or two fixed, some more pop up that are twice as bad,” he said.

Wendi Allen is currently in her first term as a city commissioner, having taken office at the end of 2014. Allen said she is qualified to serve on the commission because of nearly three decades working for an attorney. 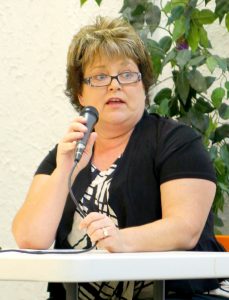 Asked about how she would help attract businesses to Harrodsburg, Allen said her focus as water commissioner is on making sure the water and sewer systems are as good as they can be for residents.

“We work along closely with the Chamber of Commerce … Harrodsburg First, but to actually bring those businesses here — I don’t do that,” she said. “My job is the water treatment plant and to make sure that we have safe drinking water here in the city and water/sewer maintenance to make sure all those areas are maintained and run properly.”

Allen said drug addiction is one of Harrodsburg’s greatest problems.

“It used to just be years ago you would see use of marijuana; now it’s related to heroin — heroin with fentanyl, which is (causing) numerous deaths,” she said.

Allen said a recently launched syringe exchange program in Mercer County has been controversial. While some have said they disagree with it because “it’s like giving a burglar a crowbar,” she said, “I know it may seem that way but our hope was if we do the needle exchange program, those needles would go there, not at our parks where our children play.”

Moseley, who has served three terms on the commission, said he has been in business in Harrodsburg for more than 20 years and been able to run his business on a “shoe-string budget.” 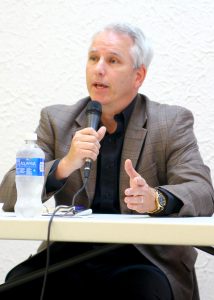 During his tenure, the city has expanded the police force from 12 officers to more than 20 and added a take-home program so officers drive their cruisers home.

The city has also built its reserve funds up and accomplished many improvements, such as purchasing a new fire truck and improving the communications center for dispatchers, without reaching into contingency funds, he said.

Moseley said building up Harrodsburg’s infrastructure, like the recent water treatment expansion, is what allows Harrodsburg to grow and attract business. Wassau Paper, now SCA, was able to expand in Harrodsburg because the water upgrade increased the city’s capacity from 4 million gallons to 6 million gallons, he said.

“The police department can’t be educators and teach these children, young adults and even adults to correct the situation. What we need is education,” he said.

In order to get more funding, the city needs to encourage growth by making it easier for construction companies to build new structures, he said. Currently, it costs $2,100 up front in fees before construction even begins. Moseley said he would like to see those costs moved to after construction is completed and possibly reduced as well.

Like Moseley and Mattingly, Isham has been on the commission since 2010. 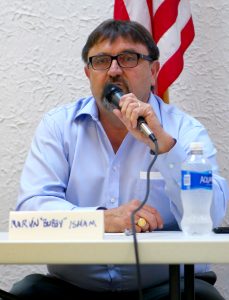 “I was born and raised here in Mercer County, Harrodsburg, and I love this town,” he said.

Isham said he wants to continue working on the city commission to lower tap-on fees and costs for builders. Lowering building costs could help with abandoned, dilapidated properties in Harrodsburg as well, because it would incentivize people to rehab those properties, he said.

Isham said he believes abandoned properties in Harrodsburg are “one of our big issues.”

Isham said he believes his fellow candidate Jack Coleman would be very helpful on the abandoned properties problem if he were elected to the commission.

Jack Coleman said he has a lengthy record of public service, having served on the Burgin Independent School District’s Board of Education, the Burgin City Council, the Mercer County Industrial Board and the Mercer County Chamber of Commerce. Coleman also served as a state representative in the Kentucky legislature for 14 years. 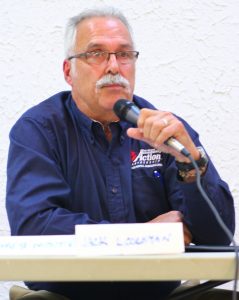 “I have a lot of experience and enjoyed working here, serving the people of this community,” he said. “At 63 years old, I felt like I would like to be involved again.”

Coleman said Harrodsburg has been “blessed” in recent years with the industry growth it has seen. In order to sustain current success, Harrodsburg needs an educated workforce to keep businesses from leaving, he said.

“(Addiction) is affecting our families, our children, our education system. And in about 10 years, we’re looking at our workforce,” he said.

Coleman said he believes Harrodsburg and Mercer County should be looking down the road and engaging in some long-range planning efforts.

Coleman said revenue has been going down, which he blamed in part on abandoned homes. Every abandoned home represents hundreds of dollars in revenue annually that’s not coming in, he said.