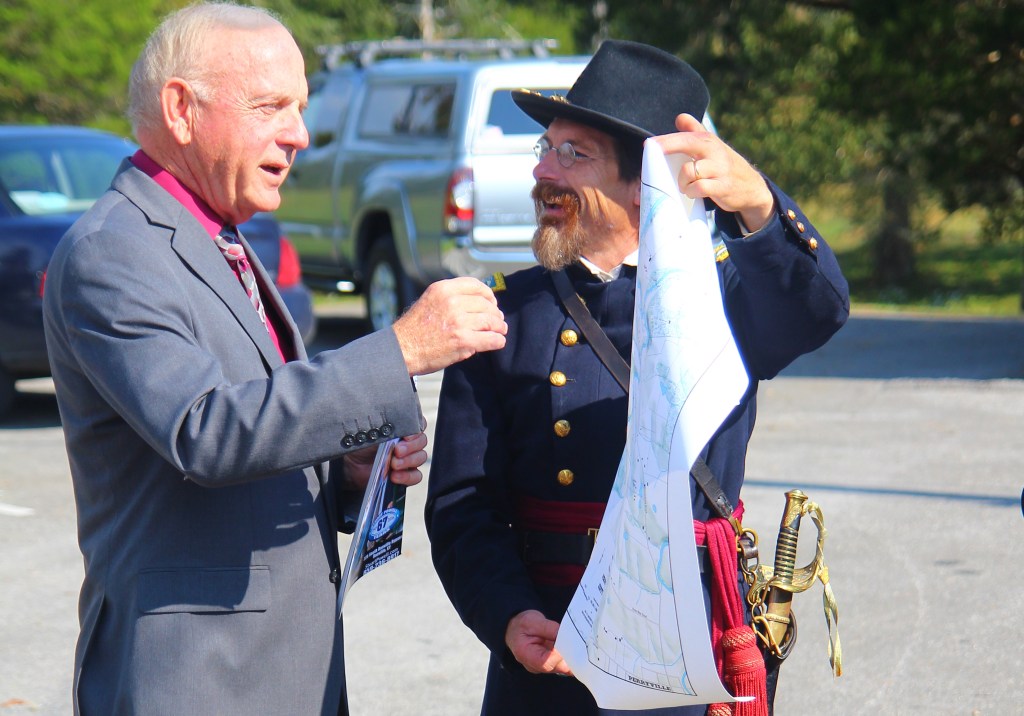 Ben Kleppinger/ben.kleppinger@amnews.comChad Greene, right, president of Friends of Perryville Battlefield and federal infantry commander for this year’s battle reenactments, presents Kentucky State Parks Commissioner Donnie Holland with a canvas map of the Perryville Battlefield area, made to appear as the land would have been during the U.S. Civil War. The presentation was made Wednesday during a media event, as reenactors were just starting to set up for this weekend.

Reenactors and organizers are already setting up at Perryville Battlefield State Historic Site for this weekend’s Battle of Perryville Commemoration.

What brings the crowds out to the event is the battle reenactments. This year, there will be two reenactments — one on Saturday and one on Sunday.

The battle on Saturday is at 2 p.m. and will recreate the Battle for the Cornfield. When this battle took place on Oct. 8, 1862, the Confederate army attacked the Union left flank on the same ground where the reenactment will take place. Visitors will have the opportunity to see the interpretation of the battle where Union General Jackson, General Terrill and Colonel Webster of the 10th division were killed.

On Sunday at 2 p.m., the battle for H.P. Bottom Farm will be reenacted. Like the other battle, it will be reenacted on the same grounds where it originally happened. In addition to the battle, visitors will be able to see a replica of Bottom’s barn that caught on fire during the battle.

Living History Village Coordinator Sarah Preston said Perryville is one of the few battlefields in the United States where reenactments happen in the same locations as the actual battles.

“To see that with your own eyes is a real eye opener,” Mattingly said.

Not only are the battle reenactments as close to the real battle as possible, but so are the flags used in the reenactments.

The Confederate and Union flags used in the reenactments are handmade by Boyle County resident Gina Webb, said Gil Lawson with Kentucky State Parks. Every flag carried by the groups in the reenactment will be the correct flag that was used in 1862.

There will be nearly 3,000 volunteer reenactors participating, representing 39 different states and one other country.

Chad Greene, president of Friends of Perryville Battlefield, has been reenacting battle scenes since 1983.

This weekend, his role in the reenactment is that of Federal Infantry Commander.

“It is my job to direct the infantry soldiers that are here in the manner that they did 154 years ago,” Greene said.

He said the area where the battlefield reenactment is located is a living memorial and it adds a different feel than anything you would ever read in history books.

He said one of his favorite parts of the reenactment is when the sun sets and it becomes dark and the only thing visible is the field and what it would have looked like in 1862.

“It’s a big affair,” Greene said. “We want to show what Kentucky has to offer by doing reenactment.”

Along with the battlefield reenactments, attendees can visit the Living History Village.

“The village is meant to be as close to a functioning town as we can get,” Preston said.

She said all of the individuals who participate have full working rolls and perform the same duties as they would have at the time of the Civil War.

“Everyone has put in a lot of hours of research to make everything as accurate as they can get it,” she said. “We strive for educating the public as much as possible. It’s fun to see the magic come together, the whole village set up and everyone coming together.”

Parking will be available along Whites Road and there will be open fields available as well. For those who park in the open fields, it is a one-tenth of a mile walk to the main area. There will also be shuttles available driving back and forth.

Recreation Director Diane Bonfert said she encourages people to come early in order to find a place to park and to get through the traffic. Even though the reenactments don’t start until 2 p.m., everything else opens at 8 a.m., she said.

“Don’t come just for the battle, come out all day and enjoy the event,” Bonfert said.