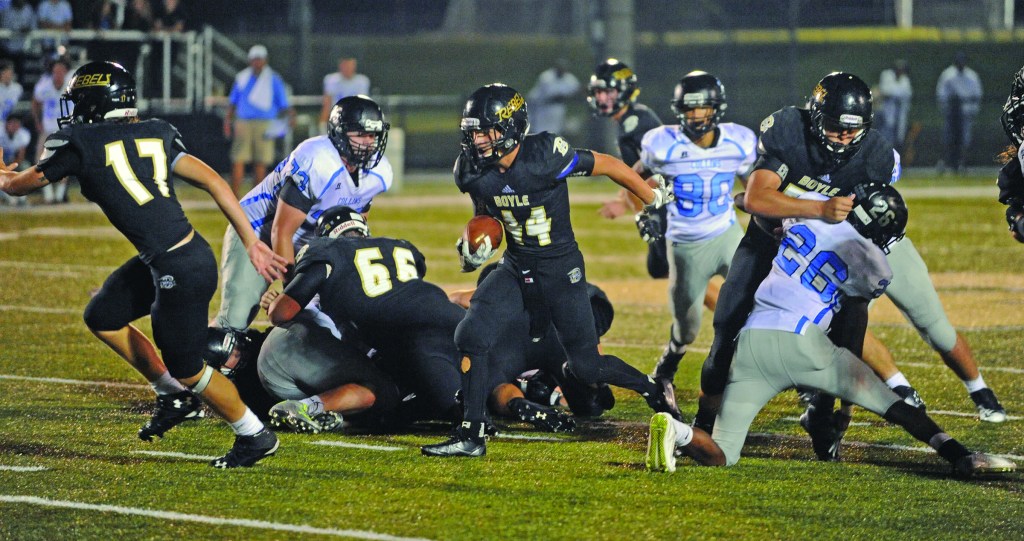 Matt Overing/matthew.overing@amnews.com Boyle County running back Tanner Crawford runs through a gap in the Collins defense. Crawford led the Rebels with 203 rushing yards in that game.

Everyone knows what Garrard County’s offense will do when it has the football.

Stopping it is the challenge Boyle County will face this week.

Nearly 90 percent of the Golden Lions’ offense goes through its run game. Running backs Jacob Foley and Devan Logan have already combined for more than 1,200 yards this season, and Foley recently set the school record for rushing yards in a career.

“Garrard is a really good football team,” Boyle coach Chuck Smith said. “They’re a physical, smash-mouth team. They like to run downhill and get after you. That’s the kind of team that they want to be and that’s the kind of team they are. I know coach (Jerry) Perry does a great job over there, and that’s kind of his personality, that tough, hard-nosed, downhill, smash-mouth type of game.”

Smith praised Foley and Logan as the strength of the Garrard team.

Boyle fared well against another run-dominant team it has faced this season in Anderson County. Boyle won 41-13.

Both Boyle and Garrard have had two weeks to heal up and prepare for the district portion of their schedules, and Smith said he likes the way his team has practiced in the past week and a half.

“It’s been good. We got some things done last week with fundamentals and technique and this week, we’ve been focusing on Garrard County,” Smith said. “It’s a big game, it’s a big district game for both teams and it’s an important game, especially when you’re in a region, and even a district, like ours, where it’s pretty competitive, all the teams are pretty good.”

Aside from stopping the run, Smith wants his team to stay focused throughout the game. Garrard quarterback Connor Isaccs doesn’t throw often, but it often surprises a defense when he does. When Boyle has the ball, Smith said he wants his team to capitalize on scoring chances.

The district season kicks off for the Golden Lions and Rebels at 7:30 p.m. Friday at Rebel Stadium.