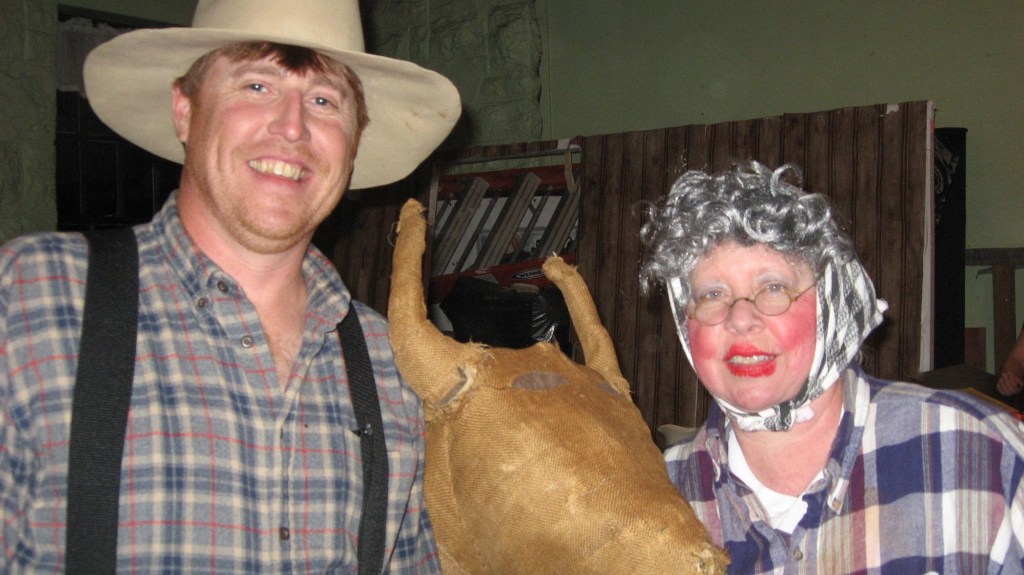 Sandy Hogue stepped up this year to write The Old Country Supper Theatre, a hugely popular and traditional event held every year at the Forkland Festival. Here’s what she had to say about her first time writing and directing:

“Back in December, I received a call from the Forkland Community Center president Matthew Ellis.  He said the talk on the Fork was there wasn’t going to be a play at the 2016 festival. When I asked why not, he replied that there wasn’t anyone to write it.  He went on to say that he had heard through the grapevine (which actually was my niece, Jada Gaddis) that he just hadn’t asked the right person.  The conversation proceeded and he asked if I was the right person and would I write it. After lots of prodding from him and with some hesitation, I agreed to try it for one year.

“Having never written a play before, I took the bull by the horns and said, ‘Here we go!’ I can only write about what I know, so I started with some stories that I remembered from my years growing up and translated them into the play. Getting them in the proper sequence for a play required some switching around several times. Since I lived most of these stories, it was pretty simple to put them on paper. Some may be a little exaggerated but it’s all in good fun.  Most are about my family: my dad, P.B. Leber; my mom, Lucille Leber; my brother, Jerry Leber; my sister, Lynda Russell; my uncle and aunt, Bill and Agnes Lane; my great uncle and aunt, Arthur and Farrie Gorley; as well as some others.

“As a director, getting the cast to understand what I want this to look like on stage is also going better than I expected since 50 percent of this year’s cast is new to acting in the Forkland play.  Some have acted in other theaters but are new to the Forkland theater. It is so exciting to see them come to life after just a few practices. They are doing a wonderful job with their parts.  And it is funny that they already know their lines while the veterans are still clinging to the written play parts.

“A revival of Birch and Charlie this year hopefully will bring back some old memories or perhaps make new ones to the audience members who have never seen a Forkland play before. Birch and Charlie, a couple who roamed around the community to everyone’s house looking for something to eat,  were in the first of many plays when my aunt Lavicia Daugherty wrote them for the festival for about 20-plus years.  Since nobody has seen Birch and Charlie for quite a few years, I thought it was time for a revival.  My mother, Lucille Leber, played the part of Birch for many years up until her death and I took over where she left off.  I still wear the same outfit she wore all those years, even her shoes on the wrong feet.  Charlie was played by Bobbie Joe Ellis for many years and now his son Matthew Ellis plays his part.  I guess you could say — it’s in our blood to play these parts.

“I would like for the audience to walk away from this play having escaped from today’s bothersome worries of drugs, politics, wars, killings, and all the sadness of the world. Hopefully, they have maybe actually enjoyed themselves for about an hour being taken back to another time where things on the Fork were just a little different.

“Not knowing how this year’s play will turn out or how successful it will be, there have been people already telling me stories for next year.  It is good to know that these people have a lot of faith in me as a writer and director and are willing to share stories so they can come to life on the Forkland stage, but we will discuss those and who will be writing next year’s play after this one is over.

“I told the cast at the first practice: This may be the shortest play or the longest play in the history of the Forkland Festival but we are going to do it and it is up to the Forkland Players to bring it to life.

“So order your tickets now!”