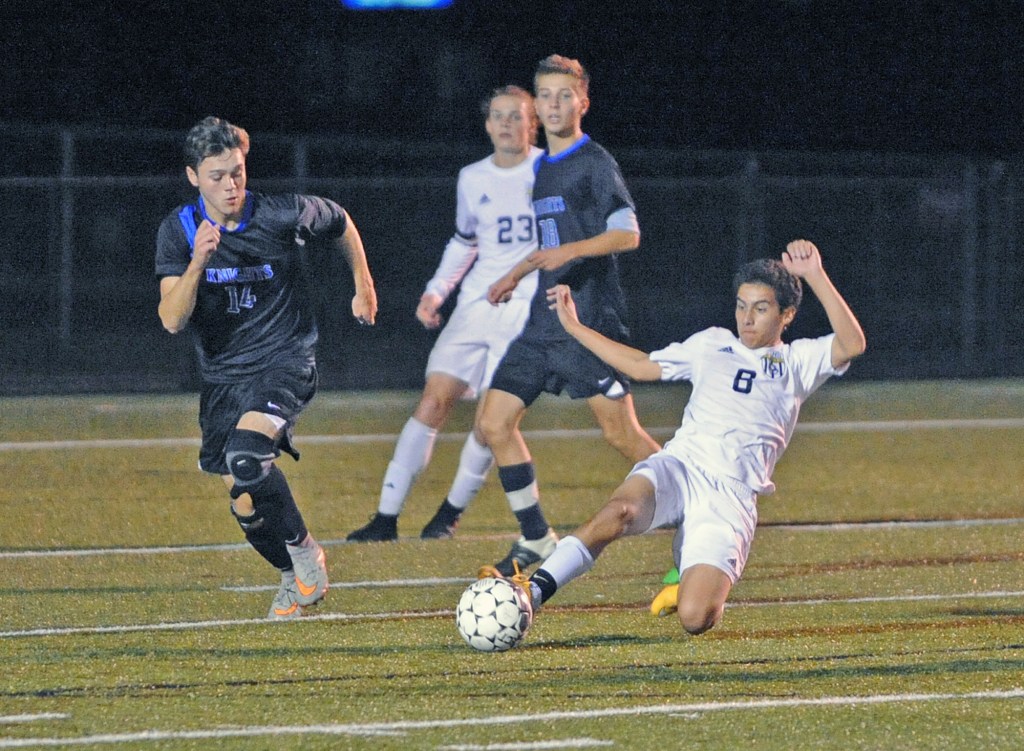 Matt Overing/matthew.overing@amnews.com Sergio Mercado (8) slides in to challenge a Lexington Catholic player during the first half of Thursday's game.

Two different halves on Thursday showcased what Boyle County can — or can’t — accomplish this postseason.

The Rebels hosted Lexington Catholic in their final regular-season game of the boys soccer season, falling 5-3. Boyle was down 4-1 at halftime and 5-1 early in the second half before coming back late in the game.

McMann said it’s clear that his team can compete with the best, but only when the Rebels play their game for a full 80 minutes.

But the Rebels responded quickly, scoring less than a minute later when the ball fell to Caleb Jackson in the box and he powered the ball into the bottom left corner.

McMann said Nik Ruby, Jackson and Ethan Nordine were players who stood out against Catholic.

Boyle struggled to possess the ball against a talented Knights’ team, but the intensity picked up in the second half. Boyle’s second goal came after Riley Cocanougher crossed to Sergio Mercado, who did well to get his foot to the ball. The ball hit a Knights’ defender in the arm, and the ref called a penalty. Cocanougher converted from the spot.

The Rebels had chances late in the game but couldn’t convert.

“They don’t play calmly. It’s a lot of just forward, forward, forward playing, ” McMann said of his team. “And we don’t work a whole lot of slowing them down, so if we’re going to go forward, what’s the best way to do it? And that’s how we practice.”

Now, sights are set on the 45th District. The winner of the district tournament will host the 12th Region tournament, meaning there’s much to play for.

“We want to host region. We want to win it,” McMann said. “I think, hopefully, we’ll be playing against Danville (in the 45th District championship), and that will be a really fun game for everybody. A good, cross-town rivalry game.

The district tournament starts Tuesday, with the championship game on Thursday.