All in the family: Reenactors forge special bonds through shared passion 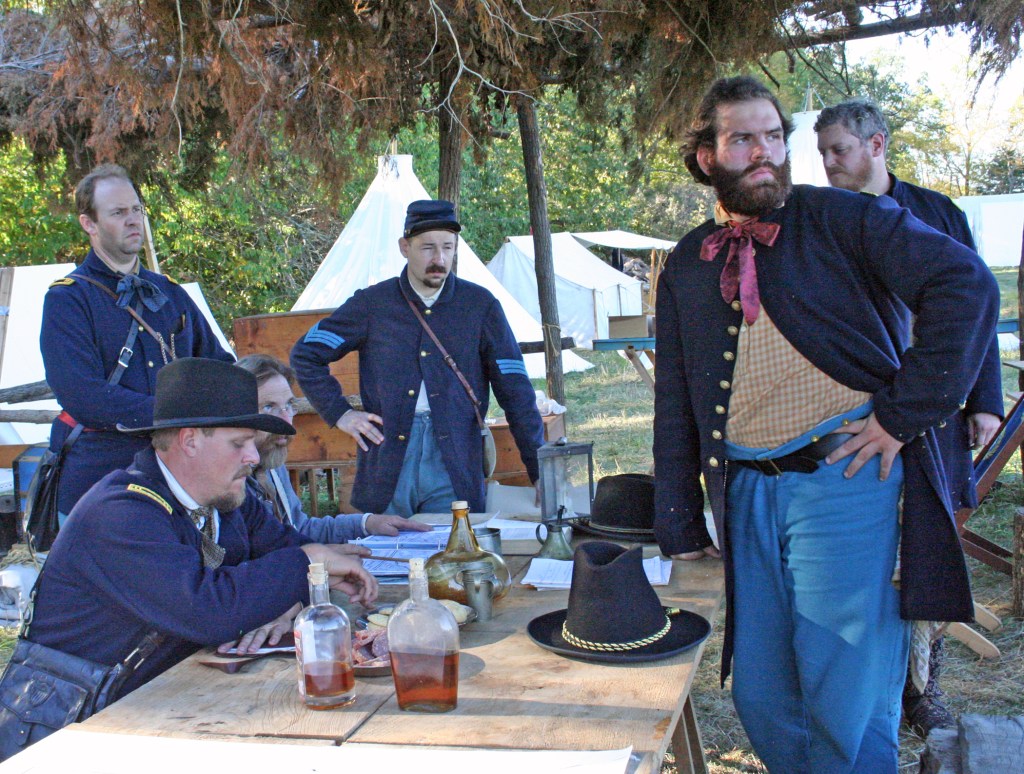 The smell of gunpowder and sites and sounds of battle marked the fields north of Perryville as the Battle of Perryville Commemoration weekend kicked off on Friday.

“It’s a really great event that they host,” said Jason Grimm of Minnesota. It’s a rarity, he said, that reenactors are allowed on the grounds where the battles ensued, but in Perryville, that rarity becomes reality. “That’s a unique aspect of this reenactment.”

Grimm, a 17-year reenactor, holds the rank of corporal in his unit, the Battery I First U.S. Artillery. They joined with others from Minnesota, Wisconsin, and Illinois to portray Stone’s First Kentucky Battery.

There’s been a year of planning going on to bring the units together for Stone’s Battery, he said.

“A lot of communication is involved. We started emailing about a year ago with the other groups in the battery,” Grimm said.

A lot of communication is involved to get all the reenactors in the right places and ensure the battles go off without a hitch. Friday afternoon included meetings of the higher ranking officers in order to plan the group’s movements.

That includes reenactors such as Tom Vaselopulos, 17, and Paul Wagner, 21.

Wagner, who is from Newburgh, Indiana, has a story, like so many, that involves a love of history. He began studying wars and “one thing led to another,” he said.

“I met reenactors, I tried reenacting, and I was hooked,” Wagner said.

Unfortunately, it doesn’t seem there are many young reenactors getting involved, he said. Cost is one of the big things. It can cost nearly $2,000 to get going, he said.

“It’s not a cheap hobby,” Vaselopulos said. Most units will work with seriously interested reenactors to loan them the uniforms, he said, and educate them on where to buy the best supplies.

“It’s expensive. You have to be willing to give up some of your identity and that’s not popular now,” Wagner said. “Everybody wants things instantly and there’s no instant here.”

It’s not easy either, Vaselopulos said, when you mix the wool uniforms they wear with the temperatures they face. Sometimes, it’s hot enough to “fry your brains.” Other days, reenactors find themselves freezing from the cold.

“Only crazy, diehard people do this,” Wagner said with a smile.

Being a good reenactor also requires a lot of research in order to be able to accurately depict the era.

“It’s a shame, because part of our history is being lost,” Wagner said. “If you look at the way the world changed after the American Civil War — it affected the whole world.”

Rifles became more accurate, medicine became better, war tactics even improved. There were a lot of firsts, too, they said, including use of the gatling gun, the first sinking of a submarine; the use of balloons in combat and as part of a telegraph; and the first land mines.

“It changed the way war was looked at. Modern warfare now was developed in the Civil War,” Vaselopulos said.

Vaselopulos, who is from Lexington, has a son at Perryville acting as an aid to camp. His wife also comes out sometimes in her period gown, “especially if there is going to be a ball.”

“She loves to dance to the old music,” he said. “Not only my wife, my two sons, and my brother decided he wanted to do this after watching me almost die from the heat at the Battle of Bull Run. He must have thought it was a lot of fun to be out there … he now reenacts with a group in Virginia.”

Wagner’s wife and daughters began attending in period dress as well, and when his daughter became engaged, he recruited Zach Parker, who is now his son-in-law.

“I was engaged to Melissa and (Wagner) was like, ‘Eh, you’re not going anywhere, come here,’” Parker said, laughing. That was in 2011 and the history buff was hooked.

Wagner said his daughter loved it when the two men began attending together.

The reenactors become like family, Vaselopulos said, and Wagner agreed.

“They do become your extended family,” Wagner said.

In some cases, reenactors actually become your family, as is the case with Pete and Kimberlee Berezuk, who met through the hobby.

Kimberlee Berezuk began reenacting with her dad about 25 years ago.

“It’s a good way to keep a young, teenage girl out of trouble,” she said with a smile. “If I got good grades, I got to go to reenactments. I enjoyed it and I’ve always had a love of history.”

She spent the weekend portraying a contracted cook, along with her longtime friend Sherrie Williams.

Williams got involved about 19 years ago. She had always been interested in the period and loved costumes, she said, but wasn’t sure how to get involved. She was working at the Southern Adventist University when she learned about a class covering life in the civil war. It included a living history section.

Eventually, Williams was put in charge of helping the students get placements for the living history section and she got hooked.

When Berezuk was dating the man who is now her husband, Williams said she was their “chaperone” at reenactments, because she was married and they were not. When they got married, she was the maid of honor at their wedding.

It was typical for an enlisted man’s wife to be hired as a baker, but cooks were usually reserved as men, Kimberlee Berezuk said.

“This job would have historically been filled by a male,” she said, but there wasn’t a man available to fill the role.

Berezuk was part of the Winston Free State, representing a part of Alabama that had succeeded from the Confederacy because they were unionists. She and her husband are also part of the 69th New York Historical Association. They are attending the Perryville commemoration with a group of friends who enjoy reenacting.

Pete Berezuk said he decided to get into reenacting about 10 years ago because he was “spending too much time behind a computer.”

“I wanted to do something more with my time,” Berezuk said.

He is serving as a quartermaster for the weekend, making sure his men have what they need and are where they needed to be.

The Battle of Perryville 2016 continues today from 8 a.m. to 5 p.m. The schedule of events is:

• 9 a.m.: Camps, sutlers and antique vendors open to the public

• 9:30 a.m: Battlefield Tour on Donelson attacks at the information shelter

• 10 a.m.: A Nation Once More presentation at the program tent

• 11 a.m.: Battlefield Tour on Open Knob at the information shelter

• 11 a.m.: Talk on the Confederate Army at Perryville at the program tent

• Noon: Talk on the aftermath of the Battle of Perryville at the program tent

• 2 p.m.: Battle reenactment of the Battle for the H.P. Bottom Farm

• 3:30 p.m.: Battlefield Tour of Open Knob at the information shelter

Kendra Peek/kendra.peek@amnews.com A group of those with the U.S. Army Camp relax Friday afternoon, before the battlefield weekend kicks off.

Kendra Peek/kendra.peek@amnews.com Kimberlee Berezuk and Sherrie Williams act as contracted cooks during the Perryville reenactment, serving the men in the unit, including Berezuk’s husband, Pete.