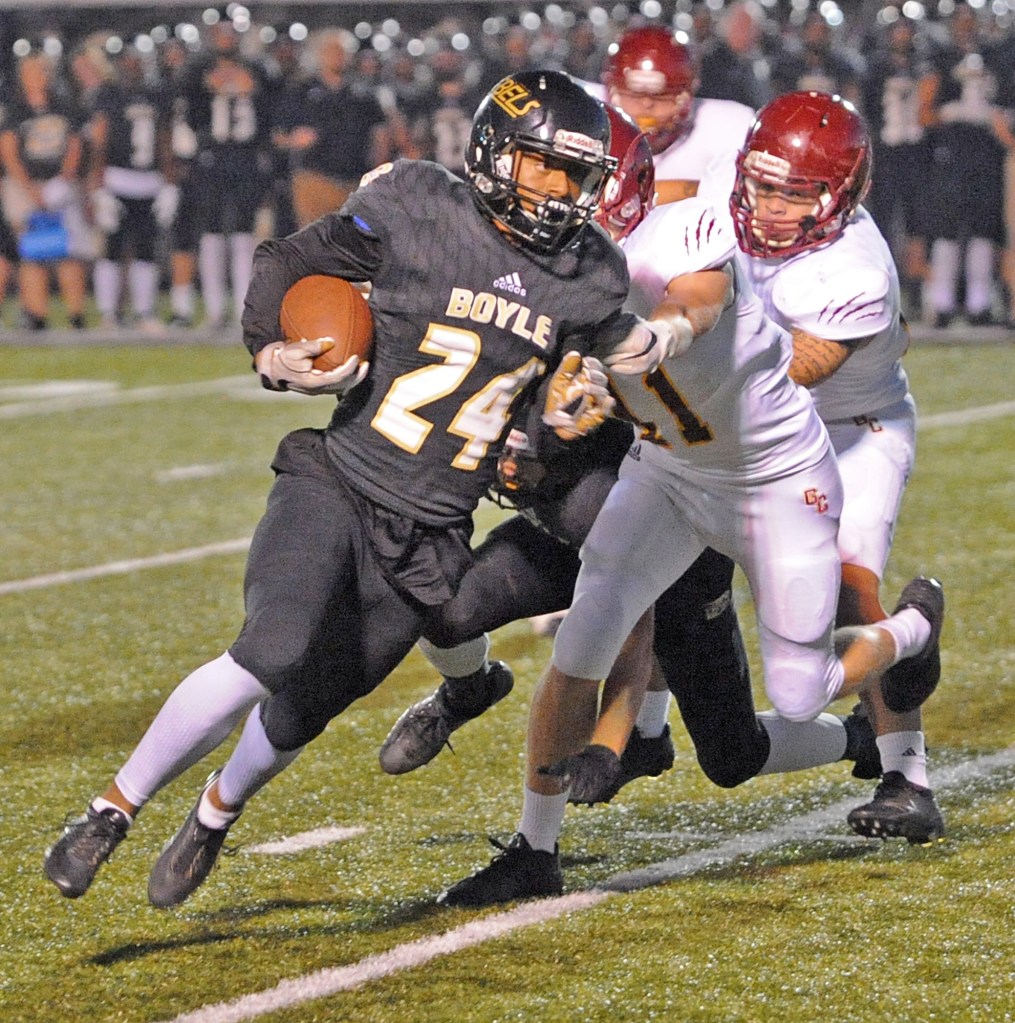 Landen Bartleson evades a Garrard County tackler during a touchdown run. Bartleson finished with a game-high 128 yards and three TDs on 12 carries.

Boyle County looks all grown up.

Boyle freshmen Landen Bartleson and Reese Smith led the team in rushing and receiving, respectively, and Sam Tiller again kept the Rebels’ offense moving in a positive direction all night.

The Golden Lions entered the game on a two-game win streak and fought with Boyle for a majority of the first half, despite going down two scores early.

Boyle opened the scoring with a 19-yard touchdown from Bartleson. An interception by Smith gave Boyle a short field, and Tiller hit Smith for a 16-yard touchdown pass four plays later to give the Rebels a 14-0 lead.

But Garrard responded, scoring on its next drive on a 38-yard touchdown pass from Connor Isaccs to Trace Poynter.

“They were a tough team, I knew they would be,” Boyle coach Chuck Smith said. “Coach Perry does a great job with them. He had them ready to play and they were doing a few things, knocking us off of the ball. They’ve got good players and they were doing that. We made some adjustments and really, truly, our guys got a little bit tougher and kept them from doing that.”

Boyle’s next drive stalled at the Golden Lions’ six-yard line, and Nik Ruby connected on his first field goal of the night to put his team ahead 17-14.

A fake punt saved Garrard’s next drive. Anthony Justus took a 4th and 25 to the 50-yard line, giving the Golden Lions’ a second chance at taking the lead. But on fourth down, Garrard’s offense had a miscommunication and the Rebels took over on downs.

Boyle scored on its ensuing drive on a Bartleson 25-yard run, pushing its lead to 24-14 just before halftime.

Bartleson finished the game with 12 carries for 128 yards and three touchdowns, his biggest game so far this season. Coach Smith said they made it a point to get the ball in his hands.

At halftime, the Rebels were up 10, and the second half only continued that trend.

Coach Smith said he and his coaches made adjustments after Garrard’s two 50-plus yard touchdowns, and his team made it work.

Bartleson’s third score of the night came five minutes into the third quarter.

Gunner Ashburn added a three-yard touchdown run late in the quarter to give Boyle a 37-14 lead entering the final frame.

Perry said he and his team knew the game wouldn’t be easy, but he didn’t like the way his team came out after halftime.

“It hasn’t been easy all year. But it’s just part of the game, it’s the district and region we have,” Perry said. “You need to accept that, you need to fight that and quit selling yourself short, and play ball. That’s the bottom line. Nobody is going to give you anything, you have to work to get it. You can’t just be good when things are going your way. You’ve got to be stronger and play every down, every play, every game. If we take a step back next week, then we’ll get beat.”

Ruby hit his second field goal of the night after an Evan Tarter interception, pushing Boyle’s lead to 26 points. Tanner Crawford scored with six minutes left to give the Rebels’ a 47-14 victory.

Coach Smith said he was happy with how his defense performed, particularly after Garrard’s two touchdowns. The Rebels allowed 246 rushing yards and 49 passing yards.

“They’re not a throwing team, they’re a running team,” he said. “That’s what they live and die by, we knew that coming into the game. They did run the ball on us some, and I think they knocked us off the ball a little bit. Then I think later in the game, our conditioning, our adjustments, our toughness responded to that and we played much better in the second half.”

Boyle’s three running backs — Ashburn, Bartleson and Crawford — finished with a combined 290 rushing yards. Tiller added 110 more yards through the air, and the Rebels’ offense didn’t turn the ball over once.

“I thought he managed the team really well,” Coach Smith said of Tiller. “That’s Sam’s asset, he’s a really smart guy. And he’s a competitor, he wants to win. He managed the game, gets us in the right play, gets the ball to the guys who can make plays. That’s what a good quarterback does.”

Boyle and Lexington Catholic sit 1-0 in the district, but Western Hills and Garrard still have a shot at the No. 1 seed. That’s something that Perry hopes his team realizes.

“If we would for some reason understand what is going on, beat Western Hills and Lexington Catholic, guess what? If Lexington Catholic beats Boyle, we may still be the No. 1 seed,” Perry said. “They’ve got to figure that out themselves. Our kids need to become mentally tougher individuals. This is the game of life, it’s not any different in the outside world. There’s going to be ups and downs, and if you can only do it when it’s up, you’re in trouble. Because you ain’t always going to be up.”