Editor’s note: Research for this article was done by Georgeanne Edwards, historian and former resident of Perryville.

PERRYVILLE — Maria Dye Rochester was the only female African American business owner in Boyle County in the 1860s.

She was described in the 1860 Boyle Census as a “Confectioner” or seller of sweets. Maria was described as “light skinned, always neatly dressed with gold-rimmed glasses” and operated a business frequented by all citizens of town, according to William Linney, Perryville resident in the last half of the 19th century.

Local historian Dr. Richard Brown also called her the only female African American business owner in Boyle County in a paper he wrote for the Kentucky Register for the Kentucky Historical Society.

A Virginia native, Maria was born in 1805 to a slave mother known as “Milly.” Her father is not known. However, he may have been white since she is identified as “light-skinned” or mulatto in court and census records.

Milly and a slave called Min, or Mum, were given to Anne Kelley Dye, wife of Fauntleroy Dye, when Anne’s father, Matthew Kelley, died. Milly’s mother was called Jenny.

Maria and Milly came to Kentucky in 1810 near the community of Harberson’s Station (Perryville) with Fauntleroy Dye when he moved from Virginia.

He and his slaves shared a cabin near the house of his daughter, Catherine Greenwood, and her husband Nimrod. The house, known as the Dye house, may have first belonged to Fauntleroy.

Little is known about Maria’s life growing up at the Greenwood farm, and it is apparent that her mother was caretaker of the house. Maria apparently could not read or write, as she made a “mark” on legal documents instead of a signature.

Fauntleroy died in 1920 when he fell from a horse while crossing Chaplin River.

His will stipulated Milly and Maria were to be emancipated. They also were bequeathed “barrels of corn” and “one hundred and fifty weight of fat pork for their support for one year,” and kitchen furniture.

He also left his cow, Cherry, to Marie, and requested Milly have control of Maria until she reached the age of 20.

Maria’s life is not known from the time of her freedom until 1828 when she shows up in Perryville census. She was listed as a “free person” in the 1830 Census.

Maria became a business woman prior to the Civil War.

Records show she purchased a lot for $28 in the “extended city limits of the town, on the road to Greensburg”, using the name of Maria Dye. The lot off U.S. 68 ran to the middle of the river in downtown Perryville.

She kept the lot for 20 or 30 years and sold it to John Pilkington, who had a blacksmith business.

In 1846, Maria bought a house and lot on the “east side of Main Street” measuring 36 feet across and extending back to “the middle of the creek.”

It was purchased for $400 in promissory notes from Richard Guthrie who purchased a lot from C.F. Burton.

It’s possible this is the same lot referenced in a deed between J.A. Burton and William Webb in 1852 for the lot occupied by Dobbs Saddlery Shop, located “between the lots of J.M. Gray and M.D. Rochester.”

In 1865, Maria Dye Rochester sold a house and lot to J.M. Hackney, occupied by A.J. Bayne. It’s described as lying between the lot of J.A. Burton and the lot of Wilson Green, on Main or Water Street, clearly Merchants’ Row.

Burton’s will in 1874 directed that “lot 3 known as the storehouse formally occupied by J.A. Burton and the side room now occupied by M.D. Rochester” be sold to W.H. Parks.

It’s not known if Maria lived in all of the property she owned, or if she had it for an investment.

Maria apparently got married before 1840. She is listed as Maria D. Rochester on the 1850 Boyle County Census and lived in Perryville with a child, Florinda Rochester, born about 1842.

No records have been found as to who “Mr. Rochester” is, or what became of him.

A newspaper article written after Maria’s death, references an interesting encounter with Sue Munday. It suggests that Maria purchased her husband “Sam” and she later found him worthless.

Marie’s daughter, Florinda Rochester, is listed in the 1850 and 1860 census, but not after that.

William Linney remembers that Marie Rochester lived in Louisville in 1879 after she moved from Perryville.

There is some evidence that suggests she may have moved there as early as 1874. Marie is recorded in the 1880 census in Louisville, 7th Ward.

Maria died at the age of 85 on November 29, 1890, of “old age”, and is buried in a section of Saint Louis Cemetery. Her plot was paid for by The Little Sisters of the Poor.

This article and others are included in a new commemorative program about Perryville published this year as part of a fundraiser to make improvements to historic buildings along Merchant Row. “Perryville: October 8, 1862 Commemorative Program” is available online at www.downtownperryville.com; in Perryville at the Main Street office, 320 S. Buell St.; Chaplin River Antiques on Merchant’s Row; Mr. Miser’s Food Mart, Battlefield Marathon Station, Farmers National Bank and Bluegrass Bank’s Perryville branches and Perryville Battlefield Gift Shop. The publication will also be available during the national reenactment downtown, at re-enactor registration and at the battlefield. In Danville, copies can be purchased at Constitution Square Gift Shop, Wilderness Trace Distillery or the Centre College bookstore. 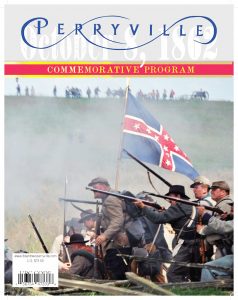