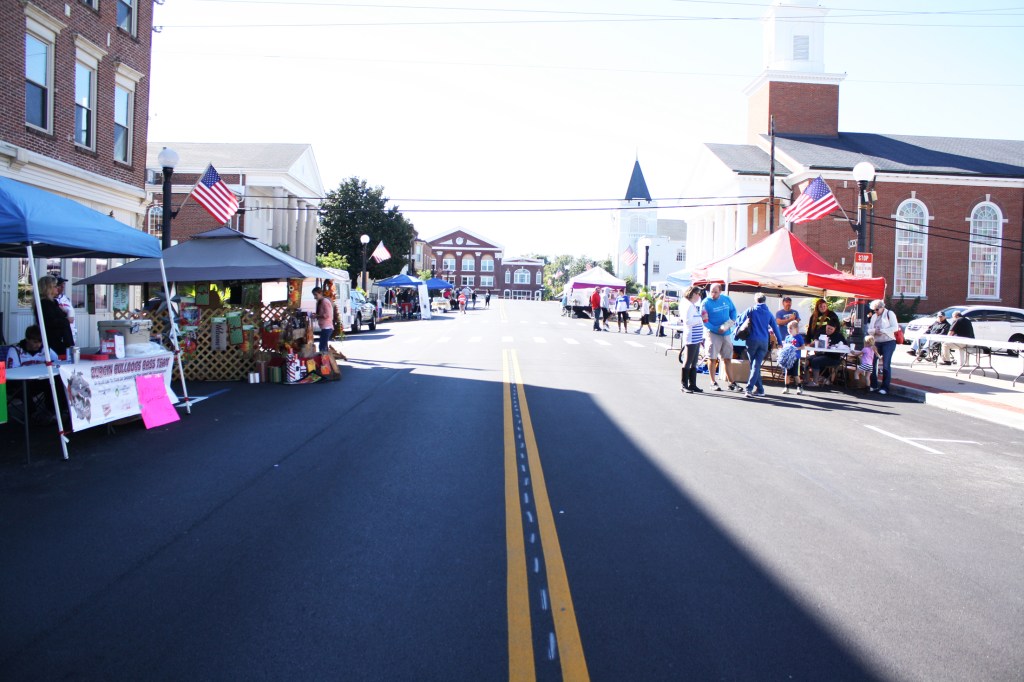 Crimson Claycomb, the Mercer County mom leading the effort to build a handicap-inclusive playground in Anderson-Dean Park, hosted a fall festival fundraiser on Main Street in Harrodsburg Saturday to to benefit the Kendyl and Friends Playground.

Several activities were going on during the festival such as live music, a fashion show by Studio G, face painting, line dancing, special olympics and much more. Claycomb hopes to build an inclusive playground so children living in the area with special needs — like her daughter, 5-year-old Kendyl — don’t have to travel an hour or more to reach a playground they can use.

“Today is our biggest event,” said Danielle Gibson, who after reading an article about Claycomb and her project, reached out to her and started helping her plan events and fundraisers.

The event hosted 16 vendors that all paid small fees, which will go toward construction of the playground. The vendors also donated either a gift basket or an item for an auction that was held in the evening.

Food was provided by Shakertown Baptist Church through their program called Cooking for the Kingdom, which donated 100 percent of the funds raised that day to the playground.

“It’s all for the playground, so it’s been really really cool,” Claycomb said.

Claycomb said the goal was to raise $5,000 at the event. However, she received a very generous donation before the festival even started.

“A very, very generous man, who has already donated $5,000, walked up to me this morning and handed me a $3,000 check to sponsor more children in the special olympics,” she said.

The playground is estimated to cost about $250,000. Claycomb said all but $58,000 has been raised. They still have to pay for the concrete and the fence for the playground.

“It is getting very very close,” she said.

Claycomb said the event was “awesome”and there’s really no other word for it.

“This is not for me, this is for Kendyl and so many other kids and adults that are like her,” she said. “This is actually for them. It’s to showcase their lives and the battles they face every day.”

Claycomb has had several people come up to her and thank her for the work she is doing to build the playground.

“We greatly appreciate it, but it should be the other way around,” she said. “It’s not about me. I’m just the person who planted that seed, but every person who has donated has watered it. They’re the ones that have made it grow into what it is.”

This will not be the last event or fundraiser Claycomb hosts. Among other plans, there will be a Spooktacular Halloween Fall Festival on Oct. 29 at Anderson-Dean Park in Harrodsburg.

“I have to personally thank all of our community members and everybody that has donated and made this possible,” Claycomb said. “Without them, we would not be where we are today.”

Kendyl Claycomb at the festival dressed as a mermaid.

Kendyl Claycomb at the festival dressed as a mermaid.

Kendyl Claycomb participated in the fashion show dressed as a mermaid.