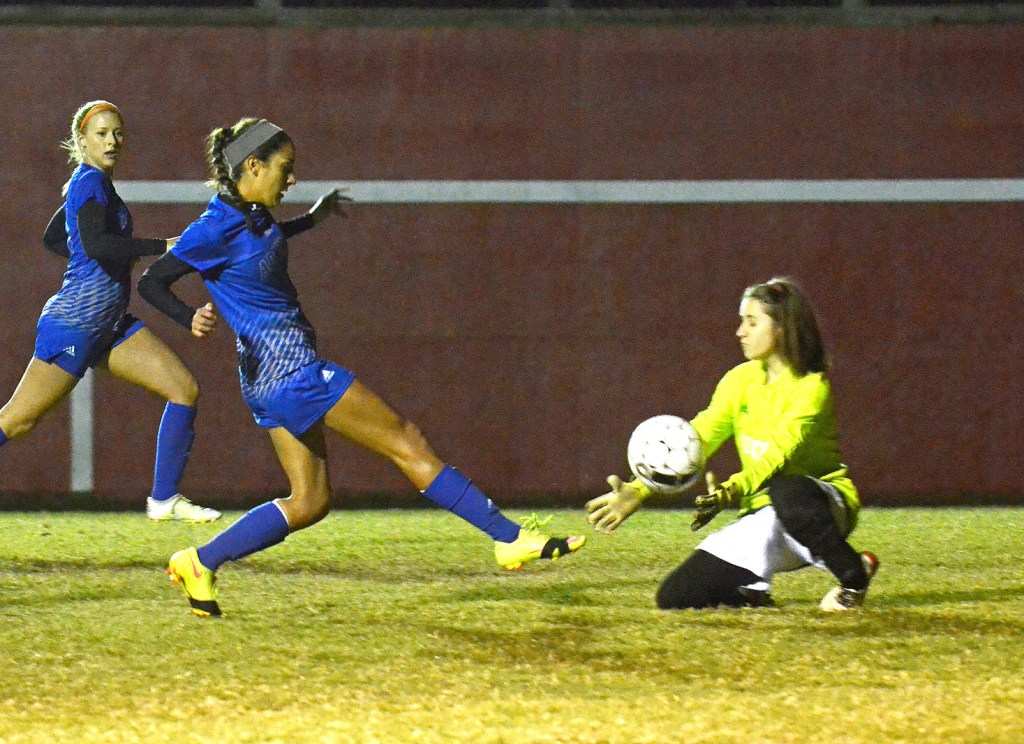 Nancy Leedy/nancy.leedy@theinteriorjournal.com Lincoln County goalkeeper Dallis Brown comes out to get the save on this shot on goal by Danville's Abigail Hibbs in the first half Monday in the 45th District Tournament at LCHS. Brown got this stop but Hibbs scored in the second half as Danville advanced 3-0.

STANFORD — For one half of soccer, the Lincoln County girls worked their game plan to perfection.

The Lady Patriots, who had trailed the Danville Lady Admirals 4-1 at the half in a 6-2 loss on Sept. 29, were embroiled in a defensive standoff in Monday’s rematch in the 45th District semifinals – locked in a scoreless tie at the break.

But host Lincoln couldn’t hold off a strong Danville team in the second half, and it was the Lady Admirals who emerged with a 3-0 victory and a spot in the district championship game.

“We were right there with them. We couldn’t have asked for anything better or anything more from the team,” Lincoln coach Leanne Kirkpatrick said. “0-0. I think that was the best score we had going into the second half. I told them at the half, ‘Whoever gets that first goal, it’s going to change the way that this game’s going to go.’ And it did. It just didn’t go our way.”

It took Danville just 36 seconds to “change the way” the game would go in the second half. Kailyn Wilcher knocked the goose egg off Danville’s side of the scoreboard with 39:24 showing when she booted the ball past Lincoln keeper Dallis Brown for a 1-0 lead.

Danville (12-5-1) would break through for two more goals in the second half to earn a shot at four-time defending champion Boyle County in Wednesday’s district title game.

“We got back to more ourselves the second half,” Danville coach J.D. Smith said. “Technically, we were not very good in the first half. The second half we moved the ball a little bit better and we were more active going towards it and more aggressive going towards the goal. We played with more enthusiasm.”

Smith said Wilcher’s quick score was just what Danville needed to right itself in the district tourney game.

“We would have liked to have done that in the first half and set the tone,” he said. “Being 0-0 at the half then coming in the second half and setting the tone in that way was extremely important for the mind-set. After that goal, the girls kind of took it from there and ran with it.”

Danville did all its scoring before the midpoint of the second half. As the clock ticked down to the 29-minute mark, Mackenzie Sandidge got off a shot which, after it was deflected by Brown, ricocheted off the sidebar and back into play and Kelsie Steber was there to punch in the goal to make it 2-0. Abigail Hibbs tallied the Lady Admirals’ final goal, rolling in a shot past Brown with 20:37 to play.

“We knew that they, Danville, were frustrated the first half,” Kirkpatrick said. “They could tell just the way they were talking to each other that they were frustrated, so we knew they were going to come out hard the second half. We just kept coaching and kept telling them to keep it up and find little things and keep working hard. There’s always something you can do to get better. We played with everything we could. They just found the back of the net and we didn’t.”

“These are the games that you want to be in,” Smith said of the championship game. “If we’re doing what we need to be doing all season long and we’re training how need to be training these are games we want to be a part of. We’ve faced them and we know they are an excellent team. We know what kind of challenge it is. Again, our goal at the beginning of the season was to get to games like these. We’re going to take tomorrow and we’re going to prepare and hopefully we’ll be ready for the challenge.”

Monday’s loss means the end of the 2016 season for the Lady Patriots and their three seniors – Jenna King, Auburn Mattingly and Hope Scharbrough .

“We thought we had it. We wanted it for our seniors, for us, for the program. We wanted this game more than we’ve wanted any game so far. It just didn’t work out for us,” Kirkpatrick said as her players walked away from this season’s final team huddle in tears. “We played our butts off tonight and I’m so proud of the effort that they gave. I’m so proud of the team. It’s okay to be upset about the loss. It’s okay to be upset because we didn’t get the win. But they should not be upset at all about the way they played because they gave absolutely everything and that’s all we’ve ever wanted.”

“We’re so excited about the season and the progress and everything ahead of us,” the first-year coach added. “I was so nervous coming in and they’ve been the best group to transition from assistant to head. I’m so proud of them and I can’t wait to see what they can do. Next year it’s our game. It’s our tournament.”