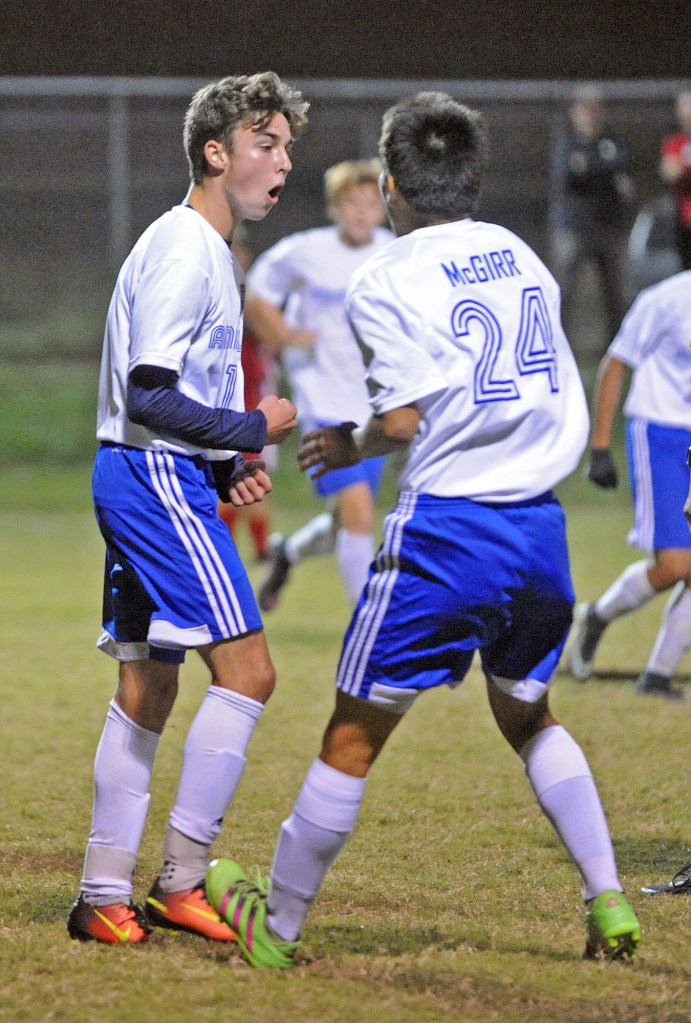 LANCASTER — For the first 55 minutes, Lincoln County looked like it would threaten Danville’s hopes of a crosstown rematch with Boyle County in the 45th District championship.

Danville led a tense semifinal game 2-1 with 25 minutes left in the game, then Tyler McGirr headed home a Briar Sanders’ free kick to give the Admirals a 3-1 lead.

After that, Lincoln folded as the Ads rolled to a 6-1 win on Tuesday.

“We fought hard, but once they scored the third goal, we kind of dropped our heads,” Lincoln coach Lewis Cummins said. “They picked their intensity up a little bit and that allowed them to get the next two or three goals in. We had some opportunities early, and if we got one or two of those it could have been a little different.”

The Patriots gave Danville everything it could handle early on, despite the Ads holding a lead for 75 minutes. Danville’s Hayden Block opened the scoring in the fifth minute of the game, scoring on a looping shot over Trevor Godbey.

After that, though, Lincoln settled in and set the tone. It wasn’t anything like Danville’s 8-2 win on Sept. 13 in Stanford.

“They were night and day from when we played them in September,” Danville coach Brent Beauman said. “I think everybody was expecting that game we played in September, and that was a much improved team. Lewis has done a phenomenal job. … You can definitely see that Lincoln County was not ready to be finished. They played extremely well, very improved with lots of heart and intensity. I think that also, mixed with our nerves, took us out of what we were trying to do.”

Isaiah Scott had a go from 35 yards away and found the back of the net with 11 minutes left in the second half, but Lincoln responded. Trey Cummins found a way behind the Admirals’ defense, and after his first shot was saved by Claudio Rodriguez, scored on the rebound.

For the first 15 minutes of the second half, Lincoln had the better chances. Jacob Baird came close multiple times but was unable to finish past Rodriguez.

Coach Cummins said his team’s goal was to be the aggressors, because his team had nothing to lose.

“That was our game plan, we executed it for about 60 minutes,” he said. “They had some shots but it wasn’t great looks. We had a couple of chances, and if we hit those chances, it puts pressure on them again.”

But Danville would score next on McGirr’s header, and one minute later, Alec McAllister scored to give the Admirals a 4-1 lead.

McAllister’s skill in the center of the field helped release the pressure Lincoln had been putting on Danville’s defense, Beauman said. He took tackles full force but continued to work the ball around for his team.

“Alec is just a tough kid,” Beauman said. “He plays with such heart and intensity. This is his thing, soccer is his thing. He’s put in so much work, probably since he could walk. He’s a good controller of things. Tonight we had him playing more of a defensive role because we knew they were going to be playing direct. And he stepped up, he won a lot of balls, he started the attack. That is a very important part of the team that doesn’t get a lot of glory, because you’re the guy that set up the play that set up the play for the goal. You get missed in the stat lines and stuff.”

Ethan Redmond and Saif Siddiqui each scored in the final 15 minutes to put the game away for Danville.

Beauman thought his team was playing nervous early on but settled into the game in the second half.

“It looked like we were playing nervous,” he said. “These guys, this senior class is a wonderful group and they’ve worked extremely hard but they’ve missed out on a lot of the postseason play that a lot of the other classes had before. They really want it, so they’re almost too nervous about messing up, so they’re kind of being a little too cautious. We can’t be afraid to do things, to move and we’ve got to play our way. You’ve got a lot of older guys dying to keep playing and do these things because this is it for them, and you’ve got a lot of young guys who have had a lot of nerves as well, this is their first time.”

Beuaman said his bench players were critical in sparking the team’s offense.

“The thing I think that really changed the half, we had Tyler, Angel (Alaves), Matt (Schroeder), Jesus (Ayala), these are guys who came off of the bench and just had a huge spark with a lot of intensity, a lot of effort and everybody else kind of fed off of their energy and they just flipped the game,” Beauman said. “It just takes a little spark to ignite a flame, it kind of took off.”

The Admirals’ game plan was to have that spark from the beginning, and it’s something Beauman wants to see on Thursday.

“The last 25 minutes of that game is how we were preparing for the whole game, it was how we needed to play the whole game — more effort, more intensity, doing the few things we were focusing on in practice that would give us more opportunities to finish,” he said. “It showed, because they started doing those and the goals started coming.”

That quick tempo and pressing style is what Beauman wants to see Thursday against Boyle County. The Rebels beat Danville earlier this season in an epic 4-3 game. It will take something similar to the final 25 minutes to beat Boyle, Beauman said.

“We kind of had both things happen, we had a bad half where we weren’t inspired, we weren’t playing, and a couple of saves or bounces and we’d be losing,” he said. “Then you have the second half where we’re playing intense, we’re playing fast and we’re playing with energy and four goals happen. Hopefully they notice the difference and they’ll come ready. Thursday will be a tough game. Boyle is a great team and the atmosphere will be a lot more intense.”