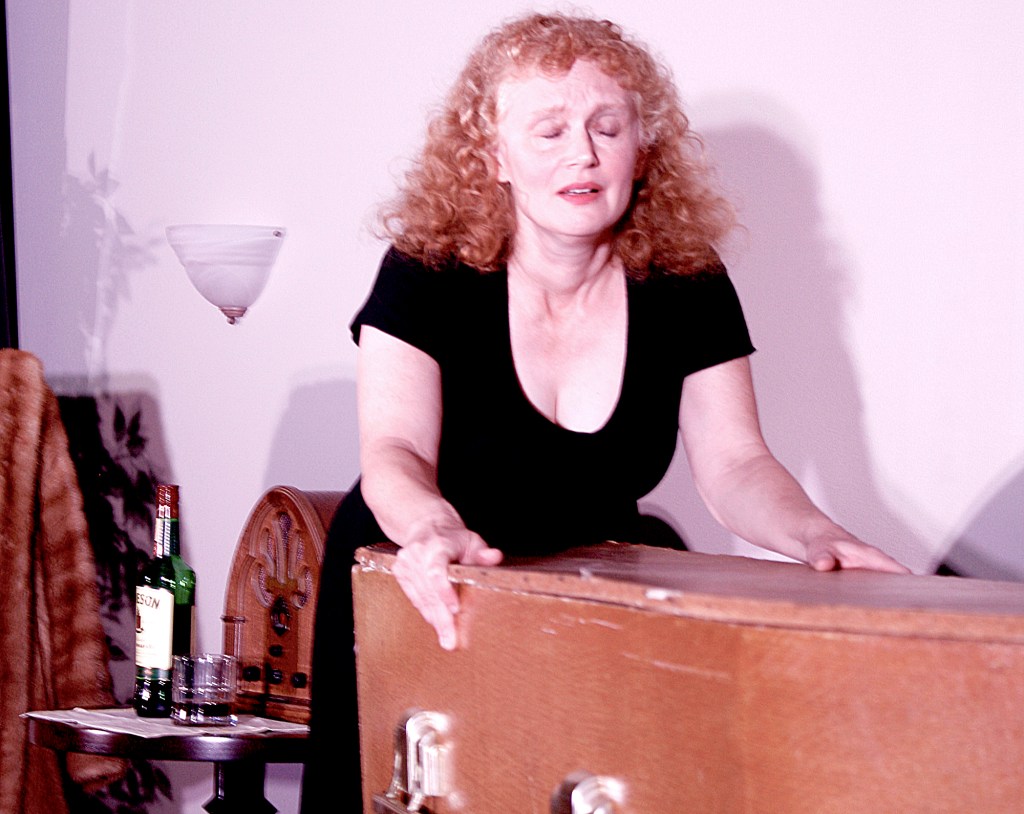 Danville’s unique traveling theater, Scarlet Cup Theater, has returned for its second “occasional and unexpected” performance and this time, it’s taken over the back room of Mallard’s restaurant for a powerful and intimate one-woman show.

The play “Two Sore Legs” tells the true story of a woman, Bridget Murphy, from Belfast, Northern Ireland, who lived her life her own way, even when her parents, society or the church told her to live differently. It was written by Brenda Murphy, the oldest daughter of Bridget.

The 8 p.m. showings Thursday-Saturday this week (and a 3 p.m. matinee Saturday) will be the first times the play is performed in an American theater setting.

There are so many interesting and unique things about the play, it’s hard to know where to begin.

The back room at Mallard’s, which is often reserved for parties, stand-up comics or political gatherings, has been turned into a performance space, with a small stage and compact lighting system. Audience members can come before the show starts, order their food and settle in around cozy tables gathered close to the stage for excellent viewing.

Mallard’s is offering a handful of Ireland-inspired dishes during October to go along with the theme of the play. The shepherd’s pie is delicious and I’ve been told the restaurant can barely make enough of its chocolate Guinness cheesecake to keep up with demand.

The food is only the warm-up act, however, for the main event.

Sharon Sikorsky is the lone actress in “Two Sore Legs.” She pulls you in from the start with an inviting manner that makes you feel like you’re listening to a best friend telling a story.

The remarkable tale of Bridget Murphy is difficult to condense into one or two or three adjectives. It’s a true story of Bridget’s life, set mostly in the 1950s and 60s in Northern Ireland and nearby countries.

The play doesn’t attempt to simplify things or resolve real life into an easy-to-digest moral. Bridget Murphy had plenty of struggles and experienced her fair share of tragedy, but she also had a lot of happy moments and plenty to be proud of.

Sikorsky captures this complexity and puts it on display for the audience to enjoy. You’ll laugh; you’ll get chills; and you might even tear up.

The set is a simple one — there’s a chair, a side table with a radio and a bottle of whiskey, and a coffin.

Throughout the approximately 90-minute play, these simple props, along with Sikorsky’s coat, purse and shoes, serve many different roles. Sikorsky voices a whole cast of characters — all memories of people being impersonated by Bridget Murphy as she retells her life story.

Fascinatingly, the objects somehow take on the lives of these impersonated characters. Sikorsky stands over and touches the coffin as she speaks about deceased family members; she sits in or even stands on the chair as she voices strong male characters; she takes off her shoes as she shares nostalgic memories.

The play is highly critical of institutionalized religion, specifically Irish Catholicism. But it’s more than a commentary on the hypocrisy of self-righteous people.

“Two Sore Legs” is really just an honest story about a woman who pursued what she loved in many different ways and didn’t care if she broke the rules to find it.

It’s only around for today, tomorrow and Saturday, so go see it before it’s gone.

“Two Sore Legs” starring Sharon Sikorsky is showing at Mallard’s restaurant in Danville, next to the movie theater off of Perryville Road, at 8 p.m. today, Friday and Saturday. There is also a matinee at 3 p.m. Saturday.

Admission is $15, not including food or drinks ordered at the restaurant. Recommended arrival time for attendees who wish to eat is 7 p.m., so that the food can be served prior to the play and noise can be kept to a minimum.

Tickets are available by calling (859) 319-1204 or visiting www.scarletcuptheater.org. Special guest Kieran Cunningham, who starred in “The Search for Tinker Doyle” at Pioneer Playhouse  in 2013, will be the host for each showing.

All royalties from the show will “go to fund theater scholarships for blue-collar children in Belfast,” according to Scarlet Cup Theater.