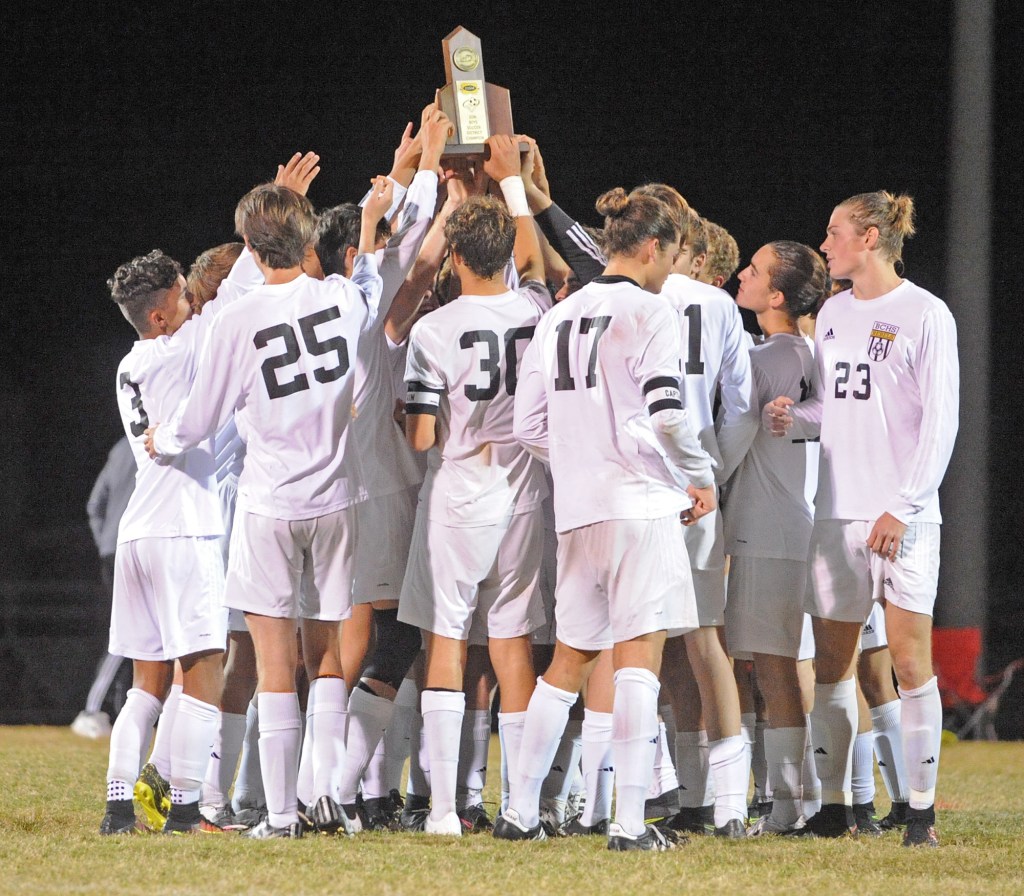 Boyle County’s game plan was to pressure high up the field against Danville.

It worked — and the Rebels are 45th District champs for a third-straight year because of it.

“I think the boys did a very good job of aggressively pursuing the ball,” Boyle coach Cris McMann said. “That’s what coach (Will) Upton was just saying, it feels good when a game plan works out like that. We had a plan, we talked to them about it, they did exactly what we asked them to do and it worked.”

The Rebels outshot Danville 14-4, and the end result was a 3-0 victory.

Danville’s Ethan Redmond shadowed Boyle striker Riley Cocanougher in the first half in an attempt to slow the region’s leading scorer, but he found a way through the Ads’ defense for a goal, 29 minutes into the game. He was played in by fellow senior Adrien Van Steenlandt who had made a run from his defensive midfield position before the assist.

“At certain points, it looked like there were four guys on him when he got the ball,” McMann said of Cocanougher. “I thought the three seniors — Riley, Adrien and Ethan Nordine — I thought they stepped up and played like seniors. They were leaders verbally and by how they played. Ethan Nordine and Adrien Van Steenlandt in the back were incredible today. I think they won almost every ball out of the air. That’s tough for the other team, when you can’t win anything up front.”

Danville coach Brent Beauman said Redmond playing back hurt his team’s ability to go forward in the first half.

“We missed a lot of midfield possession in the first half because we ran a different tactic going in, trying to help stop some of their attack,” Beauman said. “But that took away from some of our ability to create and attack as well.”

But Redmond did his job, forcing Boyle to find other attacking outlets in the first half.

“Ethan was there to frustrate and disrupt,” Beauman said. “Someone as fast and as good as Riley, it’s going to be hard to shut them down. But if you can disrupt what he wants to do, that opens it up, helps stop some things.”

In the second half, Cocanougher, Van Steenlandt and Caleb Jackson each picked up one for Boyle.

“It is a contact sport, I think sometimes people forget that,” Beauman said. “That’s what I told the guys at halftime, you’re out here playing a game that you love in a championship against your crosstown rivals, against kids you’ve grown up your whole life playing. I don’t think there was any malicious intent by anyone, it’s just a district championship game and you’re going to be intense. Everyone is a good player, it’s a physical game, that’s just how the game is going to be played. If you’re up for it, it makes for a good game. It was just hard tackling.”

Cocanougher’s goal was the only thing to separate the two sides at halftime, in large part to Claudio Rodriguez’ near-perfect goalkeeping.

“I’ve seen Claudio play for years, and that had to be the best performance I’ve seen him have in goal,” McMann said. “It should’ve been 7-0. He stopped at least two or three right inside the six, point-blank range. He had a fantastic game.”

After the game, Rodriguez was named to the all-tournament team.

“Claudio, his reactions, to be the size that he is and to have the speed and reactions that he has is just incredible,” Beauman said. “He loves this team, he loves being a part of it, and you can tell by his emotion tonight now and how he plays. He’s a good leader. When the other coach comes over and says, ‘You better put him on the all-tournament team,’ that says a lot about how he played. He was everywhere, he was organizing. He’s had a phenomenal career here and I hope it extends longer through next week.”

Claudio did his best to stop the Boyle barrage in the second half, but Nik Ruby played Jackson through on goal and Jackson finished in the bottom right corner to double the Rebels’ lead midway through the second half.

As Boyle scored, Danville’s defense started to move forward. But the Rebels held their ground, and Ethan James had a big save of his own to deny Redmond a goal late in the game.

Mercado teed up Nordine with 13 minutes remaining and Nordine blasted the ball into the back of the net to give Boyle its 3-0 victory.

With the win, Boyle will host the 12th Region tournament next week. Danville will have to play a district champion in the first round, but Beauman said he hopes his team can regroup and make a run.

“We’re still playing,” he said. “Alen (Karapandzic) said too, out of all the hundreds of teams that were playing this year, there’s only so many left. We’re one of those teams, and we can go on next week. We can’t let losing this game ruin what could happen next week. Runners up can come back and win region.

“I just hate it for the seniors that we couldn’t win districts. But the younger guys get to experience it, grow from it. The region, Mercer is by far the favorite team and there’s two or three others, but it’s something that we can, if we really focus and put in the time, come ready to fight, I think it can be a good week for us.”

McMann is happy with how the game plan worked on Thursday, but the plan to win region at home has increased magnitude.

“We’re excited to host it and get to play on our turf like we’re used to. It’s a much bigger field, there’s more room for us to use some of our speed,” McMann said. “It’s always good to host, you don’t have to travel as far. But the job is not done.”