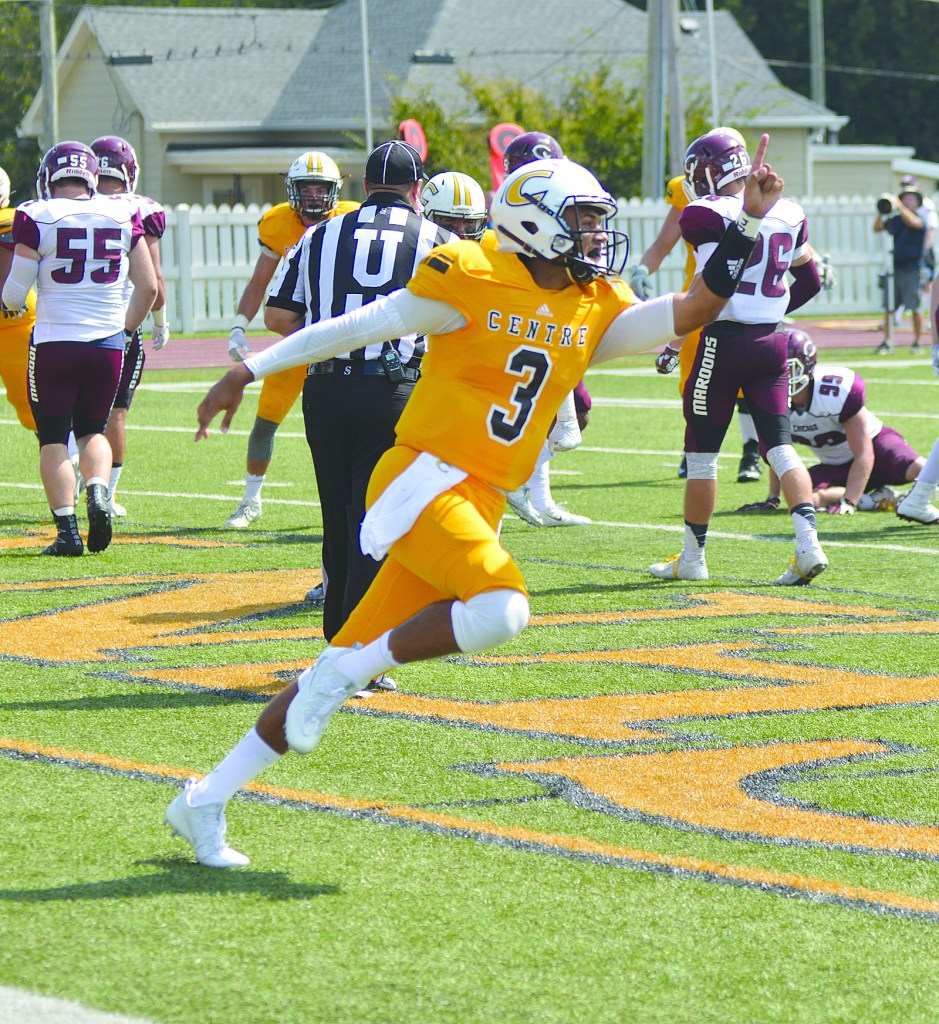 Jeremy Schneider/jeremy.schneider@amnews.com Centre quarterback Devin Hayes celebrates scoring a touchdown in a 49-27 win over Chicago on Sept. 24. Hayes is one of the nation's passing leaders in his first year as a starter, hellping lead the Colonels to a 5-1 record entering this week's bye.

Truth be told, Centre football coach Andy Frye would have liked to taken the Colonels bye a few weeks earlier in most seasons. It fits in more with the middle of the season when considering games played and preseason work.

But as it is, the Colonels will take Saturday off, and Frye said the bye week works out perfectly for this group.

The Colonels enter with a 5-1 overall record and a 3-1 mark in the Southern Athletic Association. During their biggest three-game stretch of the season, they went 2-1 with wins over Chicago, at Washington University and a loss at Hendrix.

The bye week gives the team a chance to catch up on many things, including health of the players and fundamentals.

“The first thing we focus on naturally is just to heal up,” Frye said. “It’s a long season, when you think preseason and you’re going into your sixth or seventh game of the season, you’re more than bumped and bruised.

On Monday, the Colonels had a junior varsity game against Campbellsville, which gave younger players a chance to play and coaches an opportunity to evaluate them. Tuesday and Wednesday were spent sharpening fundamentals and spending extended time on special teams, an aspect which doesn’t get the attention it needs during the week-to-week preparation for games.

The Colonels have so far benefited from the play of first-year starting quarterback Devin Hayes. The junior is seventh in the nation with 1,882 passing yards and tied for 11th with 17 touchdowns. He’s completed 64 percent of his 227 attempts with seven interceptions.

And the scary thing for future opponents — Frye thinks Hayes has only scratched the surface.

“I think Devin Hayes has the ability to be better than where he is now,” Frye said.

“He’s a student of the game. He’s smarter than you and me, he’s a Brown Scholar. Devin really does throw a good football. He’s patient in the pocket, which is not something you say let’s coach him on that. He came in having those fundamentals in tact. When his feet are set he can hit a dime, he’s very accurate.”

Defensively, Frye likes the speed his team is playing with. The Colonels are tied for seventh in the nation with 13 interceptions, and they’re second in the SAA with 386.2 yards allowed per game and third with 23.0 points per game.

It’s no coincidence the top three teams in the conference, Centre, Hendrix and Berry, allow the fewest yards per game.

The remaining schedule for the Colonels builds to a crescendo, with a home game against Berry (5-1, 3-1) waiting in the final week. Before that, though, Centre host Sewanee next week then travels to Birmingham Southern and Rhodes, three teams with a combined record of 4-12 and two conference wins.

Hendrix remains atop the SAA standings, but the Warriors still have to face WashU and Chicago, two difficult tests. Frye reaffirmed his belief the conference champ this year will have at least one loss.

That leaves four games and plenty to play for for the Colonels.