Experience not lacking among candidates for Danville school board 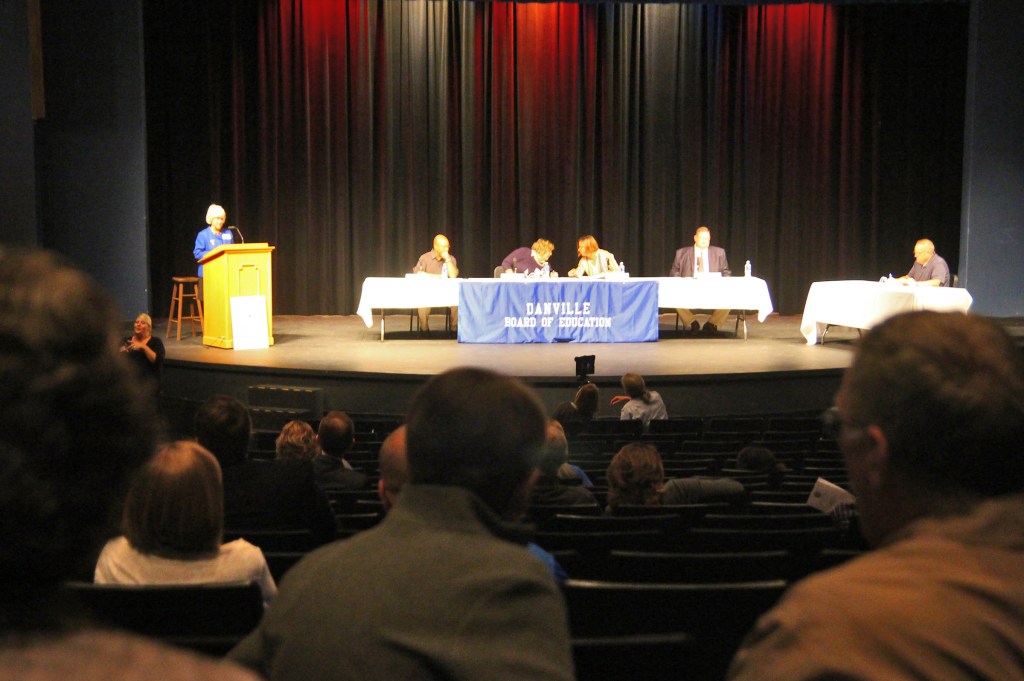 Photos by Ben Kleppinger/ben.kleppinger@amnews.com Candidates for the Danville Board of Education prepare for a forum Thursday night at Danville High School.

Danville residents have a lot of experience to choose from when selecting their school district’s next two board of education members.

The four candidates competing for the two open seats shared their backgrounds and opinions on current education issues at a candidate forum Thursday night. The candidates are:

• Troy McCowan, a 1990 graduate of Danville High School who previously served on the board of education from 2007 to 2014. McCowan currently works as a manager at Walmart. 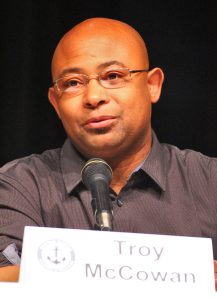 • Kathy Merryman, the current president of the combined Danville Schools Parent-Teacher Organization, an organization she helped form. Merryman has a lengthy career as an educator, including teaching in Baltimore, Maryland, and Ironton, Ohio.

• Lori Finke, a 1996 graduate of Danville High School, who runs a family antiques and interior design business in Danville. Finke currently serves on the Local Planning Committee for the school district, which has been charged with determining how to reorganize Hogsett and Jennie Rogers elementary schools.

• Malcolm Miller, a 1981 graduate of Danville High School who works as director for Casey County EMS. Miller has previously served on the local school board for Jennie Rogers Elementary and on the previous local planning committee for the school district that developed the plan to make Toliver Elementary into a second- through fifth-grade center.

On many of the questions asked by moderator Benjamin Knoll, there was little difference between the candidates.

All four said the board of education must operate as a team and touted their experience working on teams.

All four said while state testing scores are required and Danville should attempt to do well on them, a more important focus is on individual students and helping every student become college- or career-ready. 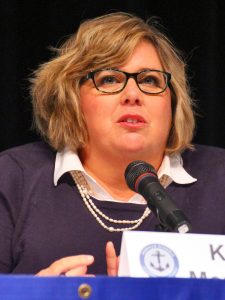 All four said funding for academics must be a top priority and extracurricular activities such as sports should be a very important second priority.

Finke said Danville’s small size is an advantage as well.

“We’re almost in a way more like a boutique school system,” she said. “… We don’t have to act like Henry Clay or some of the bigger schools … we can find different ways to adapt to our students.”

Small size can also be a challenge, she added.

Miller listed Danville’s culture as an advantage. “Danville is a great place to raise children,” he said.

Small size can be a “struggle” but “dedication” can make it an asset, he said.

McCowan said small class sizes is a plus for students, as well as Danville’s strong athletic tradition. 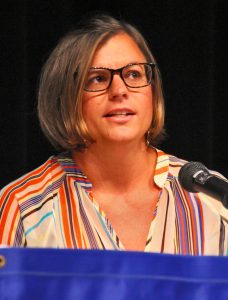 McCowan said “diversity in our staff is a big challenge, too.”

Merryman said the people of Danville are an advantage and explained how warmly she was treated when she first moved to the city. The passion people have for the school district is also an asset, she added.

“I have so many anchors in my house because it is a passion for me now,” she said.

Merryman said individualized learning is always a challenge and agreed with McCowan that increasing math scores for minority students is important.

On a question about how the candidates would seek input and feedback from the community, Merryman said she thinks it would be great to have small group meetings of people from the district and board members so that the board could get constructive feedback and be aware of things that are happening. 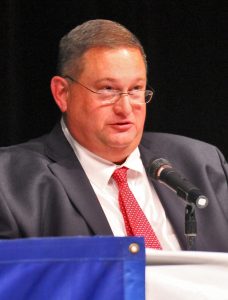 Miller said communication is very important and that includes listening to everyone.

“If you can’t communicate and talk to each other, you won’t get that done,” he said.

McCowan said it’s good to “get your face out there” so people know who you are. It’s also important to have “an open-door policy” that’s on display through things like making board member’s phone numbers public so anyone with a concern can contract them. McCowan said he would also like to have community meetings with the board.

Knoll asked one question about the reorganizational plans in the works for Toliver and Hogsett elementary schools.

“Last December, the school board approved the financing of a major renovation at Toliver Elementary to serve all students in grades two through five,” Knoll said. “A new local planning committee began meeting this past March to determine the assignment of students in preschool, kindergarten and first grade. They forwarded a plan to the board, putting preschool at Jennie Rogers and kindergarten and first grade at Hogsett. The board has now asked the local planning committee to consider a different plan that would put kindergarten through fifth grade at Toliver and preschool through fifth grade at Hogsett.

“What do you think of this new proposal and how do you feel that the district should proceed?”

The candidates responses were:

• McCowan: “I think the district should proceed on with that; I don’t have a problem with that,” he said. “… I think it’s good to have balance.”

There is a potential issue with the original plan because it would result in many students on the south side of Danville having to be bussed across town, he said.

• Merryman: “I think it’s an interesting idea,” she said. “I think it’s worth a relook.” Merryman said she would love for everyone to be happy with a plan and she wants to keep an open mind to all possibilities.

“This is what I would say about it: Danville will make it work,” she said. “It will still be a good school no matter where it is.”

• Finke: “I’ve been in on all the LPC meetings and I’ve struggled with this on and on and on,” she said.

When the previous LPC decided to make Toliver a second- through fifth-grade center, they did it because “they had money to make one good school and they wanted it to affect all the students in the district,” she said.

“We are fortunate now to be in the position where we can have two great schools — we may even have the resources to have three. Great meaning renovated buildings — we already have great schools, but greatness meaning we can spend money and update our systems,” she explained. “… I’m really excited about this new idea because I think we can have two wonderful (preschool through fifth grade and kindergarten through fifth grade) schools.”

• Miller: “We’re going to have a tremendous school system, regardless (of which plan is chosen),” he said. “The buildings need to be renovated but they don’t make the school; the teachers and the kids make the school.”

Miller said he likes having a school at Jennie Rogers because it makes it easy to have walking field trips and access to mentors from the middle and high schools.

“I don’t want to lose that connection,” he said, but noted that if the plan to make Jennie Rogers just a preschool was chosen, it would not be a wrong decision.

The four candidates are seeking the two seats being vacated by current Chair Lonnie Harp and Vice Chair Kate Graves. Harp, who is in his second term, and Graves, who is in her first, both decided against running for re-election.