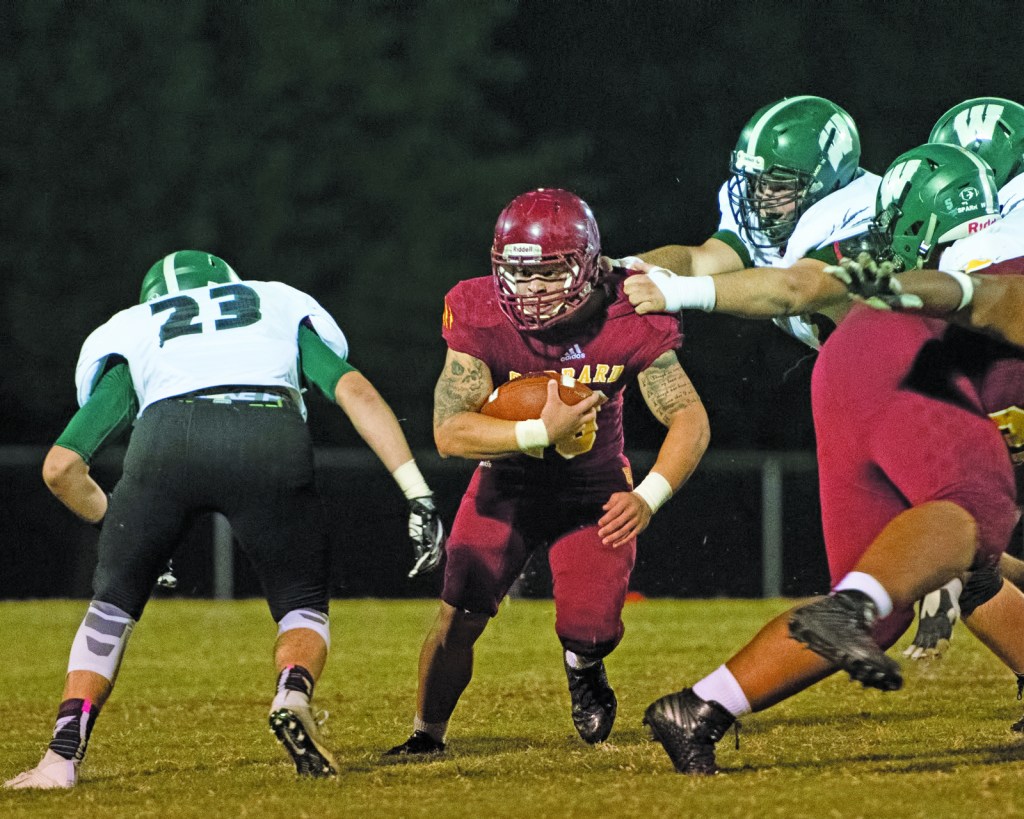 Tyler Davis/Gallery45 Photography, For the Advocate-Messenger Garrard County running back Jacob Foley splits the Western Hills defense during Friday's game. He finished with a team-high 20 carries for 106 yards and a score.

LANCASTER — Jerry Perry said there’s still time for Garrard County to become a good team, but he also said there’s ample evidence that its time has not yet come.

The Garrard coach said the Golden Lions fell short in a number of areas ranging from defense to dedication Friday night in a 28-24 loss to Western Hills at Dyehouse Stadium.

They paid for their shortcomings with their second straight district defeat after their attempt to rally from a 20-point deficit, well, fell short.

Garrard fell behind 28-8 early in the second half, came back to within one score, then saw Western Hills run the final 5:41 off the clock to beat the Lions for the first time in five meetings.

Perry said the Lions were not on their game after having the week off from school.

“We do not handle fall break very well. We have not since I’ve been here. They were in school and we were not, and you could tell the difference in focus,” Perry said. “We actually had 10 kids that were on vacation this week. We’ve got to learn commitment. We’ve got to learn how to be a teammate.”

He said there’s still time for that.

“I still like my team. I think we’ve got all the pieces if we can just get it all to come together on the same night, in the same game,” Perry said. “I still think we can be a solid team; we’re not. We’re not good, but I think we can be.”

“The defense has been porous. It has been all year, and it was again tonight. We’re poor tacklers, we don’t get off blocks very well,” Perry said.

WanDale Robinson ran for 252 yards and three touchdowns and J’Len Youngblood threw for 163 yards and two TDs for Western Hills.

“I thought we did a good job with having that balance of the run and pass,” Western Hills coach Don Miller said.

Robinson, running at less than 100 percent after leaving the Lexington Catholic game with an injury, carried the ball 28 times for the Wolverines.

“He’s still a little gimped up, but at the same time he fought through it. He’s a very tough kid,” Miller said.

Robinson produced a play for the highlight reels with a 98-yard touchdown run midway through the second quarter, but some of his most important yards produced no points at all.

After Garrard scored with 5:41 remaining to pull within 28-24, he carried the ball on nine consecutive plays, gaining 63 yards and helping Western Hills get four first downs to keep the Golden Lions from getting the ball back.

“I thought our offensive line did really well, and WanDale ran the ball really hard, and the combination of those two solidified the win right there,” Miller said.

Garrard’s ground game didn’t fare so well. The Lions averaged 258 rushing yards in their first seven games but managed only 148 on Friday.

Jacob Foley, who became the school’s career rushing leader two weeks earlier, rushed for 106 yards on 20 carries for the Lions, but he didn’t play until the second quarter.

Perry had hoped to rest Foley after he suffered a knee strain in the Lions’ loss to Boyle County, but Foley was pressed into service after Devan Logan, Garrard’s second-leading rusher, suffered a knee injury on defense early in the second period.

“I wasn’t planning on playing him … but he’s a tough kid. He’s not a soft kid,” Perry said.

Garrard’s offense finished with 286 yards, with nearly equal amounts of rushing (148) and passing (138) yardage after getting better than 85 percent of their yardage on the ground in their first seven games.

Connor Isaacs had his best game as the Lions’ quarterback, going 4 for 6 for 138 yards.

“I think Connor is getting a lot better,” Perry said.

After Western Hills took a 28-8 lead on the first series of the second half, Garrard and Isaacs answered about 90 seconds later when he threw to a wide-open Jarreth Davis for a 61-yard touchdown play.

Davis very nearly caught another long TD pass early in the fourth quarter, but Robinson intercepted Isaacs’ pass in the end zone and returned it 59 yards to the Garrard 43-yard line. A personal foul penalty moved the ball to the 28, but Western Hills turned the ball over on downs at the 21.

The Lions drove downfield in seven plays, scoring with 5:41 to play when Isaacs found Josh Warren open along the right sideline for a 51-yard pass play. But they never got the ball again.

Foley put Garrard got on the scoreboard late in the first half with a 3-yard touchdown run and a two-point conversion run – he ran for conversions after all three of his team’s touchdowns – but Western Hills answered with a 12-play, 72-yard drive that produced its second highlight reel play of the second quarter. Youngblood threw a short pass to Trenton Davis, who pitched the ball back to Bryce Edmonson, who had a clear path to the end zone for a 47-yard hook-and-ladder touchdown that gave the Wolverines a 21-8 lead seven seconds before halftime.

The Wolverines maintained their momentum at the start of the second half, driving 52 yards in seven plays to score on a 9-yard run by Robinson that made it 28-8.

Western Hills scored on its first possession of the game as well, as Robinson ran in from 6 yards out to cap a 74-yard drive. Garrard’s Colton Barker sacked Youngblood on fourth down to stop the Wolverines’ second scoring threat, but Robinson broke free for his 98-yard touchdown the next time they got the ball to give them a 13-0 lead.