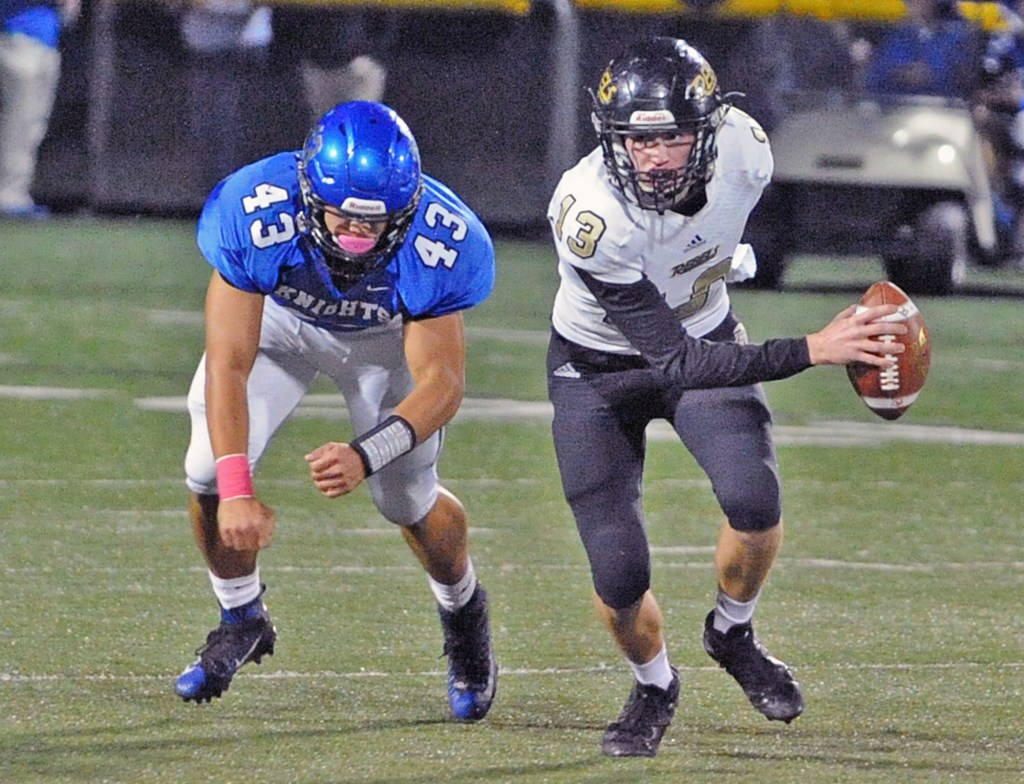 LEXINGTON — For one half, it looked like another classic Boyle County vs. Lexington Catholic football game.

But the second half was uncharacteristic for the Rebels, who turned the ball over four times in the final 24 minutes.

Lexington Catholic out-gained Boyle 325 to 290, but two interception returns for touchdowns and favorable field position helped the Knights to a 38-7 victory.

“It is what it is,” Boyle coach Chuck Smith said. “Nobody wanted this, we didn’t prepare for this to happen. I’ll have to really look at the film to really get a good feel about what went wrong. I know you can’t throw six interceptions and win a football game. I do know that you can’t play the game on your side of the field all night long. And we did. They didn’t have to go as far for their touchdowns, and I was really disappointed with that.”

Both defenses controlled the game in the first quarter, with neither team getting on the board. But Lexington Catholic was winning the field position battle: The Knights started just three drives in their own territory.

“For the most part, I thought or defense scrapped and battled and played well enough, maybe even well enough to win,” Smith said. “We gave up a couple of easy scores and you can’t do that. Special teams I think let us down a couple times and the offense just didn’t get it done.”

Boyle would finally find some room to run on its final drive of the first half. Landen Bartleson had a 51-yard run to set up a 22-yard touchdown pass from Sam Tiller to Reese Smith.

Those two plays were two of the three longest plays of the night for Boyle. The big play potential just wasn’t there, coach Smith said.

“They have a really nice defense, they do, but they don’t have that nice of a defense to where we can’t get more points on the board than what we got,” coach Smith said. “It was a disappointment. It was disappointing for me as a coach and the coaching staff, but it was really disappointing fro the players as well. I think they really prepared hard for this, but that’s what happened and we’ve got to move on.”

Boyle’s end-game rushing statistics might look good on paper, but the Rebels struggled to find running room in the second half, running for just 60 yards in the final 24 minutes.

Connor Fry hit a 36-yard field goal for the Knights to make it a two-possession game with 7:25 left in the third.

From there, Boyle’s turnover struggles took over.

Tiller threw his third and fourth interceptions on the next two drives, with an interception by Smith sandwiched in between.

Kirk Fagot scored on a three-yard run just before the end of the third quarter to put the Knights up 25-7.

Boyle freshman Reed Lanter took over on the next drive and connected with Nick Walker for a 23-yard gain on his very first throw, putting Boyle on the Knights’ 5-yard line. But Lanter’s next throw was intercepted by Sid Sharp, who ran it 96 yards for a touchdown.

Coach Smith said he switched to Lanter because he thought Tiller didn’t have the composure to finish the game after throwing four interceptions. Tiller finished 6-for-18 with one touchdown, four interceptions and 68 yards.

“I just thought Sam had gotten shook and I just didn’t think he’d be able to recover,” coach Smith said. “He got shook, threw some interceptions, got down on himself to the point that I didn’t think he was going to be able to pull himself back together. We needed to make a decision right there and we decided to give Reed some opportunity.”

Lanter was intercepted again, this time by Eric Sottile, on the Rebels’ next drive. Sottile returned it for a touchdown to give Lexington Catholic a 38-7 victory.

After the game, coach Smith spoke to his team about two things that can happen after a game like this.

“We’ll either split and pull apart, start blaming everybody and everything, or No. 2, we’ll come together like a team and a family should and rebound, get a plan together to turn this thing back around before this season is over with.”