Grounded by his roots

Although only 22 years old, Centre grad Braden Urevick has recorded an EP confirming him as an “old soul.”

“I would probably attribute it to the kind of music I grew up listening to and playing,” Urevick says about “The Willow,” a release containing four folksy, Americana songs able to be purchased on Bandcamp.com. 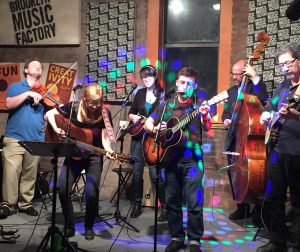 Braden Urevick, playing harmonica and guitar at center, plays with the Kentucky Ensemble band from Centre during a past gig.

“It was mostly older stuff I grew up with. No matter the genre, I’m attracted to music with a degree of thought and feeling put into it. So, I really wanted to make something I felt had a meaning and was worthwhile.”

Urevick, originally from Knoxville, Tennessee, graduated last spring with a degree in international relations and took a job in Garmisch, Germany, for the next year and a half at a resort for American military servicemen, servicewomen and their families stationed in Europe. He says the job isn’t permanent, but it’s an awesome opportunity.

So was cutting an EP, he says.

“I’d always written songs, but never had the time or resource to record music until this year,” Urevick says. He created the EP as an independent study project with Dr. Nathan Link, associate professor of Music at Centre. A labor of love, he wrote the songs in his dorm room, then recorded them in between classes. Link also contributed by playing instruments and singing backup on the EP. 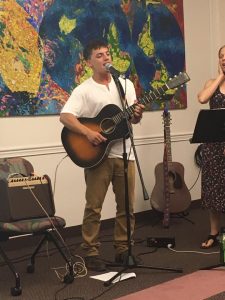 “You know, right away, I usually pick up on a really talented person in the group,” Link says, referring to the Kentucky Ensemble group he leads at Centre, playing gigs in and out of school. “They usually immediately hit me …”

But Urevick took him a moment to notice. A shy, mostly soft-spoken person, Link says he stood out at first due to his guitar skills. It wasn’t until someone couldn’t make it to sing backup during a gig that Link noticed his voice.

“He sang harmony, and I was really surprised, that voice. It gradually began to don on me what all he could do … He played piano in class, guitar, can sing, plays harmonica …” Then Urevick questioned Link about an EP he cut some years back, asking great, intuitive questions about the process. It finally led them to “Willow.”

Link said during the creation of the EP, he only gave Urevick advice about orchestration and instrumental arrangements; the songs were all created by him alone.

“It’s easy to tell he’s been listening to stuff like Ray Charles and Stevie Wonder since he was a kid. Musically, he’s been listening to really good stuff since he was so small, so he’s really not as young as he seems.” Link describes Urevick as simply real: “He’s that way with his music, and he’s that way as a person. He talks about, thinks about the most interesting things, but he’s quiet and soaking everything up. I think he sounds kind of old and wise because — well, he really is. I’m impressed by him.”

Aside from guitar and harmonica, Urevick also plays piano, mandolin, ukulele and drums.

The songs are “Over the Hill,” “What Are You Thinkin,” “Appalachian Mountain High” and “Somewhere Down the Road.” Most have pretty infectious, upbeat guitar licks, combined with Urevick’s extremely smooth voice which comes across like a country story-teller. Urevick describes the songs as “somewhere in between folk and Americana, marinated in Appalachia.” He wanted the sound to be as organic and real as possible, so he kept it all acoustic.

Urevick’s voice has an incredibly easy-vibe to it, as if he’s putting across no effort at all to sing; he’s just telling stories.

“Well, growing up in the South, I’ve always had this kind of music in the back of my mind, but I never really honed in on it until I got to Centre and joined the Kentucky Music Ensemble.” The more he listened and played it, the more he fell in love with it — which is easily felt in the way he sings.

“Sure, it’s a bit out of the norm for someone my age to listen to, although … it has gained some popularity over the last few years. And I think that’s because it’s a good alternative to a lot of the stuff you hear on the radio these days — it’s really organic and genuine music.”

He hopes, more than anything, that people walk away after listening to his music feeling happy, with a sense of connection to it. And that what they heard was authentic, honest.

Urevick likes playing all different styles — everything from jazz and blues to Bluegrass and rock. He’s still trying to settle in as a musician, he says, and form his own sound. But, he thinks it’s always good in life to keep himself constantly learning, trying new things. He will say, though — he really feels at home with an acoustic guitar.

As for the future and his music? He’s not totally sure.

“We’ll see where it takes me. Music is such an important part of my life, I know that I’ll be involved with it one way or another. Whether than means making a career out of performing, or owning a karaoke bar off the side of a highway — I don’t know. But I love it, and I’ll take it with me wherever I go.”

Want to check out Braden Urevick’s EP “Willow” or buy the tunes? Look him up at bradenurevick.bandcamp.com/releases. 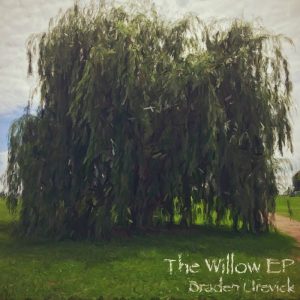