Vocal worlds collide in The Summit, when the Manhattan Transfer meets Take 6 at the Norton Center

Audiences will experience an explosion of vocal artistry as two of the most awarded acapella groups in history, The Manhattan Transfer and Take 6, combine forces to create a remarkable evening of music at the Norton Center this October. With decades of experience between them, and a broad range of musical styles covering everything from jazz to swing, gospel to R&B, each group will perform their own set and then culminate the evening with duets features the tightest harmonies, innovative arrangements, and funky grooves.

“Two of the acapella world’s most legendary icons return to the Norton Center to show our audience just what amazing pop vocal music sounds like,” said Norton Center executive director Steve Hoffman. “While both groups have appeared at the Norton Center separately over the past few years, what makes this concert a not-to-be-missed experience is that these two award-winning timeless vocal ensembles will be performing their own sets as well as singing together. These are pitch perfect forces not to be reckoned with!”

The Manhattan Transfer marks the 40th anniversary of their debut recording this year while Take 6 celebrated its 25th anniversary last year. The Manhattan Transfer remains a cornerstone for great jazz and pop hits that earned them induction into the Vocal Group Hall of Fame. Their first hit, “Operator,” was followed by the history making “The Boy From New York City” making them the first group to win Grammy Awards in both Pop and Jazz categories in the same year. The 12 Grammy® nominations they received for their album Vocalesein 1985 made it the second only to Michael Jackson’s Thriller as most nominated album in one year, and cemented the group’s status as one of the most important and innovative vocal groups in the history of popular music. “Route 66” and their rendition of “Birdland” are yet more memorable classics of their 19 singles and 29 albums over their stellar career. With worldwide record sales in the millions, their melodic and jazz infused vocals continue to bring audiences back year after year spanning generations of fans. 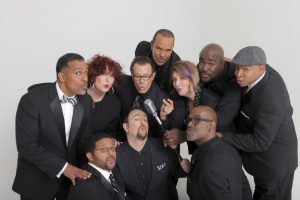 Photo by John Abbott
The Manhattan Transfer and Take6, the two most awarded acapella groups in history, will come together to present The Summit, Friday, Oct. 21 at Norton Center for the Arts.

Ten-time Grammy Award winners Take 6 hold the title of the most awarded acapella group in history. They were inducted last year into the Gospel Music Association Hall of Fame, from whom they have received 10 Dove Awards in addition to their Soul Train Music Award, BRE (Black Radio Exclusive) Vocal Group of the Year and more. Take 6 captivates audiences wherever they perform and the group has earned performances on Saturday Night Live, the Oscars, the Grammys®, and the honor of performing for four sitting U.S. Presidents. They have performed with the likes of Stevie Wonder, Ella Fitzgerald, Ray Charles, Queen Latifa, and Sheryl Crow, as well as on film soundtracks including Spike Lee’s Do The Right Thing, John Singleton’s Boyz In The Hood, Warren Beatty’s Dick Tracy, David Mamet’s Glengarry Glen Ross, and the theme song to the TV series Martin.

No ordinary double bill, this is a show featuring unexpected twists and turns, creating a memorable one-in-a-lifetime event for audiences of all ages!

Mandy Prather is director of marketing and development for Norton Center for the Arts.