Miss Marjorie Bradford (Walker), age 88, passed away Saturday, Aug. 20, 2016. Born at the onset of the Great Depression in 1928, in Flemingsburg, Kentucky, Marjorie was the eldest of three children born to the late Hollis and Minnie Reeves Bradford. Miss Bradford graduated from the University of Kentucky in 1950 with a degree in Home Economics. 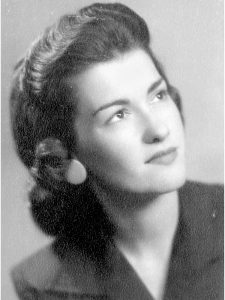 Immediately upon her graduation, Miss Bradford was invited to join the faculty at Centre College in Danville where she taught until 1955. At that time, she moved to Tuscaloosa, Alabama where she earned her Master’s Degree in clothing and textiles. Upon graduation, Miss Bradford joined the teaching staff at Oregon State University for a semester-long internship. Afterwhich, she joined the Department of Home Economics at the University of Cincinnati for a year before moving on to a position at Purdue University, in West Lafayette, Indiana.

Marge later became a Home Economics Agent in Morgan County, Kentucky for the Cooperative Extension Service at the University of Kentucky. She retired from this position in 1994 and moved to Winchester, Kentucky where she worked part time at Al’s Garden Center.

Known as a perfectionist, Marge was a master gardener, a remarkable seamstress and a passionate homemaker. Miss Marjorie was smart, feisty, thoughtful and kind.

Marge was a member of the United Methodist Church of Flemingsburg.

Marge was preceded in death by her parents, Hollis and Minnie Bradford and by a brother, Lawrence Allen Bradford, all of Flemingsburg, Kentucky.

A memorial service will be held on Saturday, Oct. 22 at 1:30 p.m. at the First Presbyterian Church of Winchester.

A devoted daughter, sister, mother, Nana and friend, Marge will be missed by many.