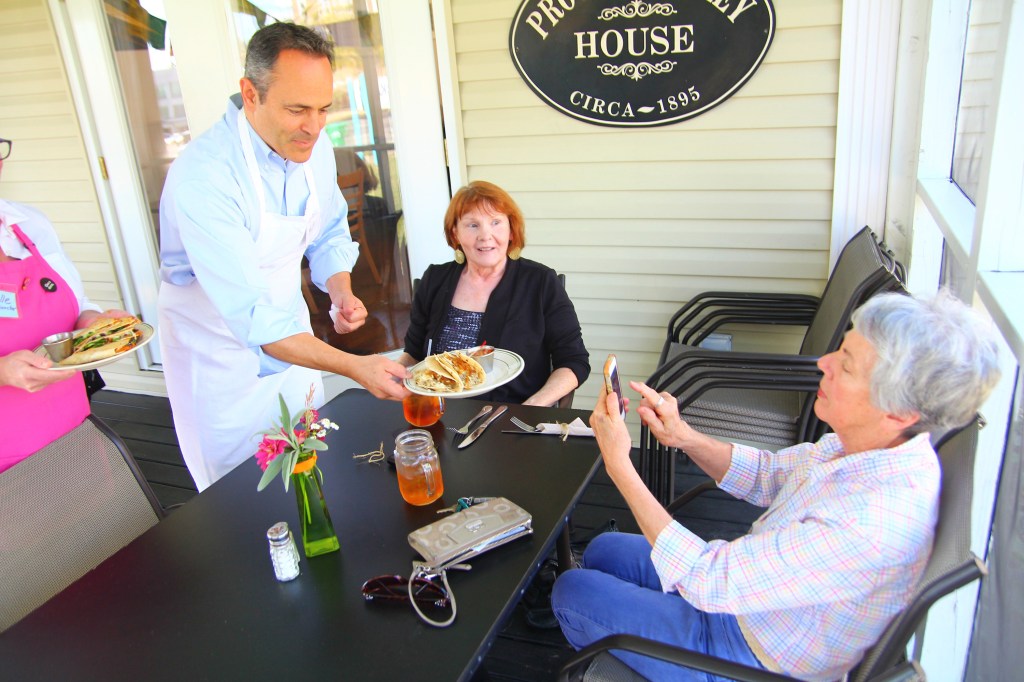 Ben Kleppinger/ben.kleppinger@amnews.com Mary Joe Bowling of Danville takes a photo of Gov. Matt Bevin as he serves her lunch on the porch of Grace Café Tuesday afternoon.

Gov. Matt Bevin stopped by Grace Café in Danville Tuesday to get some lunch and provide publicity for a non-profit he said he thinks highly of.

“I think there’s so many facets of this that are good, that are healthy for the community and healthy for the state,” Bevin said just before sitting down for his lunch of a sweet potato quesadilla and salad. “… I would love to see more of these around the state.”

Grace Café is a pay-what-you-can restaurant that lets people pay as much or as little as they can for their food. People can also volunteer to work at the restaurant in exchange for their food, which is the route Bevin opted for Tuesday, delivering meals to several surprised patrons.

Danville resident Beth Minor said she and fellow diner Mary Joe Bowling “had no idea” Bevin would be their waiter.

“We’ve been to Frankfort many times and we never got to meet you,” Bowling said as Bevin placed her plate on the table.

Bevin took advantage of the moment, responding “Well, now I come to you — that’s the way this administration works.”

Bevin, who was also in town for the announcement of an expansion at the Meggitt factory, said Grace Café is a good example of a community taking care of itself. The governor had staff shooting videos about Grace Café prior to his arrival and he live-streamed from the restaurant during his lunch.

Grace Café founder Rochelle Bayless said it was exciting to have Bevin patronize her restaurant.

“I think he’ll bring a lot of awareness to our mission, which is critically important to this area,” she said. “Food is apolitical. Our mission doesn’t discriminate against anybody. Particularly in this political climate, I’m glad to see that food brings people together — regardless of difference.”

Ben Kleppinger/ben.kleppinger@amnews.com Mary Joe Bowling of Danville takes a photo of Gov. Matt Bevin as he serves her lunch on the porch of Grace Café Tuesday afternoon.

Ben Kleppinger/ben.kleppinger@amnews.com Kentucky Gov. Matt Bevin, standing at left, talks with customers at Grace Café after delivering a meal to their table.

Ben Kleppinger/ben.kleppinger@amnews.com Gov. Matt Bevin brings an order out of the kitchen at Grace Café.