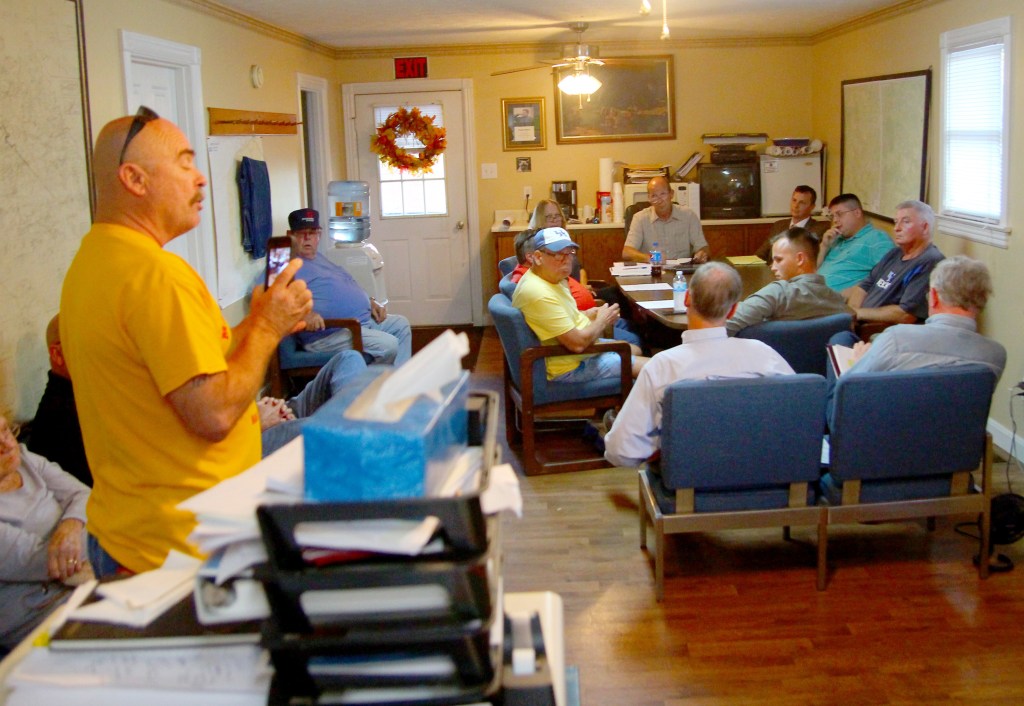 HUSTONVILLE — Lincoln County Sanitation District officials plan to ask state regulators to clarify a rule that apparently will require residents to hook onto sewer service even if doing so would require a pump.

A crowd packed Hustonville City Hall Monday night for a special called meeting to discuss the new sewer system project, which some residents are now furious over.

“We got hornswoggled,” Hustonville Police Chief Fred McCoy said at one point during the contentious meeting.

The sewer system being installed on the west side of Lincoln County has been about six years in the making and is intended to help reduce the amount of human fecal matter that makes it into the local watershed and potentially contaminates Herrington Lake — a supply of drinking water for the area.

At an August 2015 meeting, residents were assured by Sanitation District officials, including board Chairman Bill Payne and engineer Luther Galloway, that no one would be required to hook onto the sewer system if doing so would require the installation of a pump to get the sewage up to the main.

But in early October, it came out that Lincoln County’s sewer use ordinance requires houses within 200 feet of a sewer tap to tap on even if a pump would be needed.

At Monday night’s meeting, Payne said “it was June or July” when officials found out the state plumbing code requires all houses within the 200-foot limit to tap on.

Payne said he and Galloway would attempt to obtain further clarification from Frankfort and said they didn’t know about the plumbing regulation at the time of the 2015 meeting.

“Are we … putting a sewer system in and these people don’t know what Frankfort requires before we got to this point?” said McCoy, who was recording video of the council meeting on his phone while he talked.

McCoy said he thinks it’s “Communist” to cut off water service to residents if they do not hook onto the sewer system.

“This has been a run-around,” McCoy said, criticizing Payne, Galloway and Hustonville City Attorney Jonathan Baker. “… There’s nothing that they’ve done yet that’s been above-board. I’ve been a police officer for 38 years and if there’s anything I can point out, it’s a conman or a fraud. And this here has been nothing but a fraud from the beginning.”

Councilman Jimmy Evans said he would like to give 30 days notice and exit the contract that Hustonville has entered into with the Sanitation District. The city has agreed to read sewer meters and send out sewer bills on behalf of the district, and in exchange it collects a fee per user. The city can also do maintenance on the sewer system if it has the equipment to do so, and be paid back by the Sanitation District at an hourly rate for that work.

Galloway told Evans that he doesn’t think the city could exit the contract until the initial six-month trial period has expired.

“The city could be bankrupt by then,” Evans responded.

Councilman David Matthew Couch questioned Payne on why he didn’t know about the plumbing regulation sooner.

“I don’t sit around reading the plumbing code,” Payne said.

“Wouldn’t it be something if I sat around and didn’t read the law and try to be a policeman?” McCoy interjected.

“That’s the problem I have with this,” Mayor David Peyton said. “This project was along to a point where the majority of the financing was secure, engineering had been worked on forever, and we’re still finding out things.”

Payne said once they found out about the law, they had to follow it.

McCoy and Couch once again admonished Payne and Galloway for not knowing about the law before telling people they wouldn’t have to tap on.

“We’re into this about six years now and the engineers are in it for about 10,” he said. “It’s always been our intention that the City of Hustonville and the Sanitation District would be partners; this is a joint venture. This is something that can benefit the city and benefit the water quality of the water quality that we buy from Danville. … It might permit some economic development here in town and even a restaurant — you can’t put a restaurant in now without a sanitary sewer.

“So we’ve always considered that this was something that could benefit both parties and I hate to see the dissension and the disruption that we’re going through now.”

Evans questioned why the city wasn’t involved in negotiating the contract; Payne said Peyton attended meetings and was involved and he invited council members to attend Sanitation District meetings.

Later in the meeting, McCoy raised a different complaint, alleging that the contract entered into by the city and the district holds the city liable for anything that happens with the sewer system, including fines from the Environmental Protection Agency.

Baker responded that the contract does not hold Hustonville liable unless damage or expense is caused by Hustonville employees.

McCoy said he disagrees vehemently with that assessment.

“Y’all got hornswoggled,” he said. “It says right there in the contract that the city is responsible for all fines.”

After the meeting, Peyton affirmed what Baker had said, that Hustonville is not liable unless Hustonville does something to damage the sewer system itself.

“If it’s not our fault, we’re not responsible,” he said.

A portion of the contract provided by McCoy states that, as the operator of the sewer system, Hustonville “will pay all fines imposed” if the fines result “from the acts, errors or omissions of (Hustonville).”

Another portion provided as evidence by McCoy states that Hustonville will not hold the Sanitation District responsible for liabilities that are “related in any way to the performance of this agreement.”

The council came to consensus that Galloway and Payne should attempt to get clarification from Frankfort on the plumbing regulation issue, as well as another issue of whether Hustonville’s water employees are qualified to conduct inspections on the sewer system.

Peyton said if Frankfort hasn’t provided clarification by the time of Hustonville’s regular November meeting, there will not be a special called meeting held. Instead, the issue will be discussed at the regular December meeting.