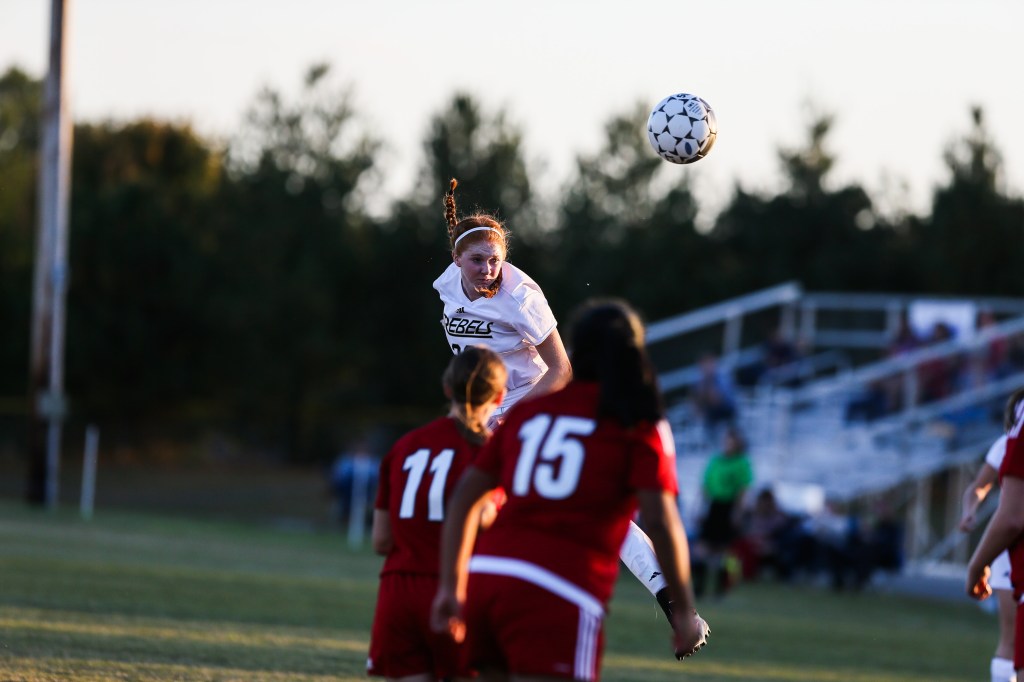 SOMERSET — Boyle County girls soccer team came into Tuesday’s first round of the 12th Regional tournament as one of the biggest favorites in a game in some time.

Simply put, this game was a total mismatch on paper, and on the field, it was even more lopsided.

Boyle County wasted little time in jumping all over the Cardinals, scoring four goals less than seven minutes into the contest, and the Rebels rode that fast start all the way to a 10-0 victory over Wayne County, in a game that ended with just over 23 minutes left on the clock due to the mercy rule.

“Our girls knew the situation we were in tonight,” Rebels coach Brian Deem said. “I’ve been on the other end of the spectrum where I started the program 19 years ago. I was the other team that had no chance in a game like this. We told the girls not to disrespect them (Wayne County), don’t disrespect yourselves, and don’t disrespect the game — you compete and let me pull you out and make the adjustments when I need to.”

About the only adjustment coach Deem needed to do in his club’s region opener was to make sure he had his reserves ready to come in and contribute.

Boyle County scored four goals before some of the crowd had a chance to get to their seats in this affair.

Becca Tarter gave the Rebels the lead for good just a minute and a half into the contest, heading in a corner kick off the foot of Lindsey Wren for a quick 1-0 lead.

Abby Carter tallied a pair of scores less than two minutes after Tarter’s goal, giving Boyle County a 3-0 lead with 36 minutes, 25 seconds remaining in the first half of play.

Emmie Harris then tallied a pair of goals, giving Boyle County a 5-0 lead with over 27 minutes remaining in the opening frame.

It was at that juncture coach Deem brought in his reserves, and they got the job done as well.

Nicole Mingey — a starter — made it 6-0 in favor of the Rebels just over a minute after Harris’ second score of the game.

Wren extended the lead to 7-0 with 9:29 remaining in the half, and with just over two minutes left in the stanza, Emily White’s first score of the contest gave the Rebels an 8-0 lead by the intermission.

White scored her second goal of the evening with less than seven minutes gone by in the second half. Lauren Steinhauer finished things off, thanks to her goal with 23:07 remaining in the game that ended the night with a 10-0 Boyle County win.

With the win, the Rebels moved to 23-1 on the year and advanced to tonight’s semifinal round of the tournament.

Wednesday’s first semi final game will pit Danville up against West Jessamine at 6 p.m. from Southwestern, while the nightcap will feature the Rebels going up against East Jessamine. The Jaguars advanced with a  4-3 victory over Pulaski County.