RubyAnn Cooper Gaskin, of Danville, died Oct. 17, 2016. She was the daughter of the late Albert Joseph and Imelda Calcote Cooper and was predeceased by her husband, Jim Gaskin and her daughter, Ann Keith Burckley Osborne.

RubyAnn was a dance teacher at the Cooper School of Dance and a life long member of The Presbyterian Church. She was dedicated to her community, her love of the arts and especially the children. 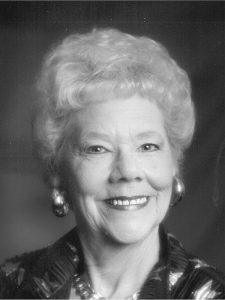 She was a past president of the Danville B&PW Club, the Danville-Boyle Co. Democratic Women’s Club and was listed in Who’s Who of American Women. RubyAnn is survived by her sister, Shirley (Tommy Sheene) Cooper and her brother, Albert J. Cooper Jr.; two grandchildren, Matthew (Sara) Osborne of Lexington and Caelin (Zach) Scott of Richmond; and a great-grandson, Teddy Osborne. Also surviving are seven nieces and nephews, 12 great-nieces and nephews; and eight “great-greats”.

Visitation will be from 11 a.m. to 1 p.m. on Thursday, Oct. 20, 2016, at Stith Funeral Home, Danville, immediately followed by a funeral service at 1 p.m. conducted by Albert Cooper Jr. and Darrell Hahn. Nephews will serve as pallbearers.

Memorials are suggested to Heritage Hospice. The online guestbook is available at www.stithfuneralhome.net.