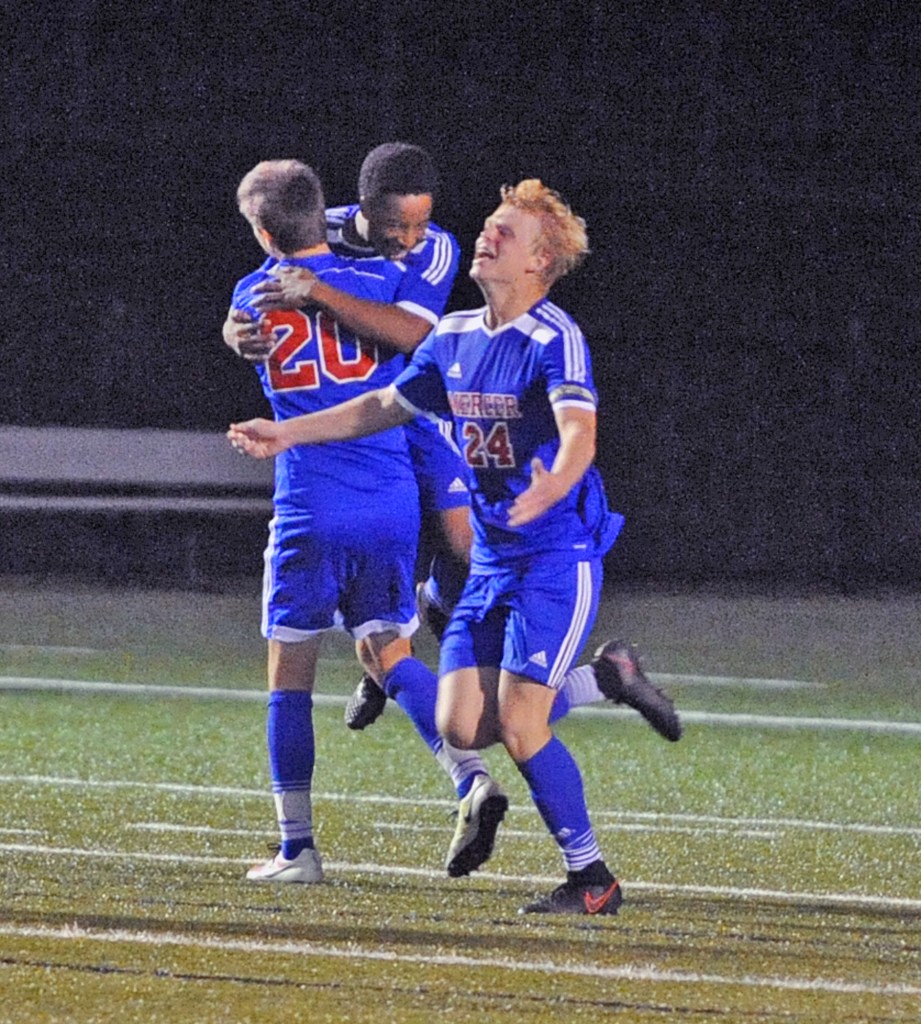 Mercer County was down. Twice.

Each time, the Titans rallied.

Mercer hadn’t allowed three goals in a game to any team in Kentucky in last two years. But they did that on Wednesday, giving up three goals to Boyle County’s Riley Cocanougher.

But the Titans rallied.

In an epic overtime game, Mercer found a way to beat Boyle County at Rebel Stadium, 4-3, with a Golden Goal with just 11.7 seconds remaining in the first period of overtime.

“We knew coming in tonight, it was going to be a battle,” Mercer coach Garrett Stark said. “Any time Mercer and Boyle play each other, it’s a battle. We’ve played them tough in the last four years in the region tournament. We expected it was going to be like that tonight. I’m proud of the boys, how hard they fought and we were able to pull out that win.”

The game was physical — six yellow cards were given. Multiple players on both sides went down with cramps late in the game. Both coaches praised the effort of both teams.

“That was an incredible game,” Boyle coach Cris McMann said. “I’m proud of our team, I’m proud of Mercer’s team. Both sides, they were great sports, they fought hard. I told my guys before the game, a good opponent is supposed to make you play your best and find out how good you can be. I think Mercer did that for us and I think we did that for them. That was a fantastic game.”

McMann and the Rebels had the game with Mercer circled all year after the Titans beat Boyle 2-1 in the 12th Region championship last year. This year, Mercer has been ranked in the top 10 in the state for much of the year while Boyle has struggled with consistency.

But the best Boyle team came out on Wednesday.

Cocanougher scored the first goal of the game after an assist from Nik Ruby, 13 minutes into the game.

For 30 minutes, Cocanougher’s goal was the only one of the contest. But it wasn’t for a lack of action — Boyle keeper Ethan James had a handful of spectacular one-on-one saves to deny Mercer’s top goalscorers.

“He’s a freshman,” McMann said of his keeper. “He doesn’t play like one or look like one. I’m super excited to have him around the next few years. He was definitely a big part of why that game was so close. They have two really strong goalscorers up top and he made some fantastic saves on those guys, stopping them with his fingertips.”

At halftime, the score was knotted at 1-1.

Mercer came out and controlled the pace of the second half and was rewarded with a goal 11 minutes in, when Ballard found Shackleford for a goal.

But the Rebels weren’t done. Alex McMann played Cocanougher, who flicked the ball with the outside of his foot around the Mercer defense and finished from outside of the box.

“They were playing the long ball up top, he had speed up top and he was able to finish,” Stark said of Cocanougher. “He scored all three for them. Long passes up to him, and with his speed, just caught us in transition a lot.”

Cocanougher scored his third goal on an Adrien Van Steenlandt assist midway through the second half.

Shackleford scored to tie the game at 3-3 off of a corner with 14 minutes to play in the game.

The two teams headed into overtime with multiple players nursing cramps in the final five minutes of regulation.

“You could see how many guys were cramping up all over the place,” coach McMann said. “We asked them to give everything they had, and I think they did. It’s disappointing to lose, but I’m not upset. I don’t feel bad. They gave everything, they played as well as they could play. It was just an unlucky break there at the end, and that’s how it goes.”

With 11.7 seconds on the clock, Mercer scored the Golden Goal. Shackleford had a long throw into the box and Marcus Lewis got a touch to bounce the ball over James’ head to win the game.

Stark said he and his team always talk about making the most of opportunity, and that’s what Lewis did with his goal.

“We talk about, when time is up, it’s up,” he said. “We wanted to take every second of the game tonight. It literally went down to the last 11 seconds to get the goal. We just don’t quit fighting. These guys have a lot of heart, they put a lot of time and effort into conditioning in the preseason and during the season, and I think it gave us some strength tonight.”

Now, Mercer will play West Jessamine for the region title at 7 p.m. today. It’s the third game in as many days for the Titans, and the fourth time they will have played West this season. Mercer has won all three games by a combined 11-1.

“Any time you play a team a number of times in the same year it’s tough to beat them. This will be our fourth time playing them, that’s always tough. But our boys will be ready to play.”