Rebels advance to rematch with West Jess in region final 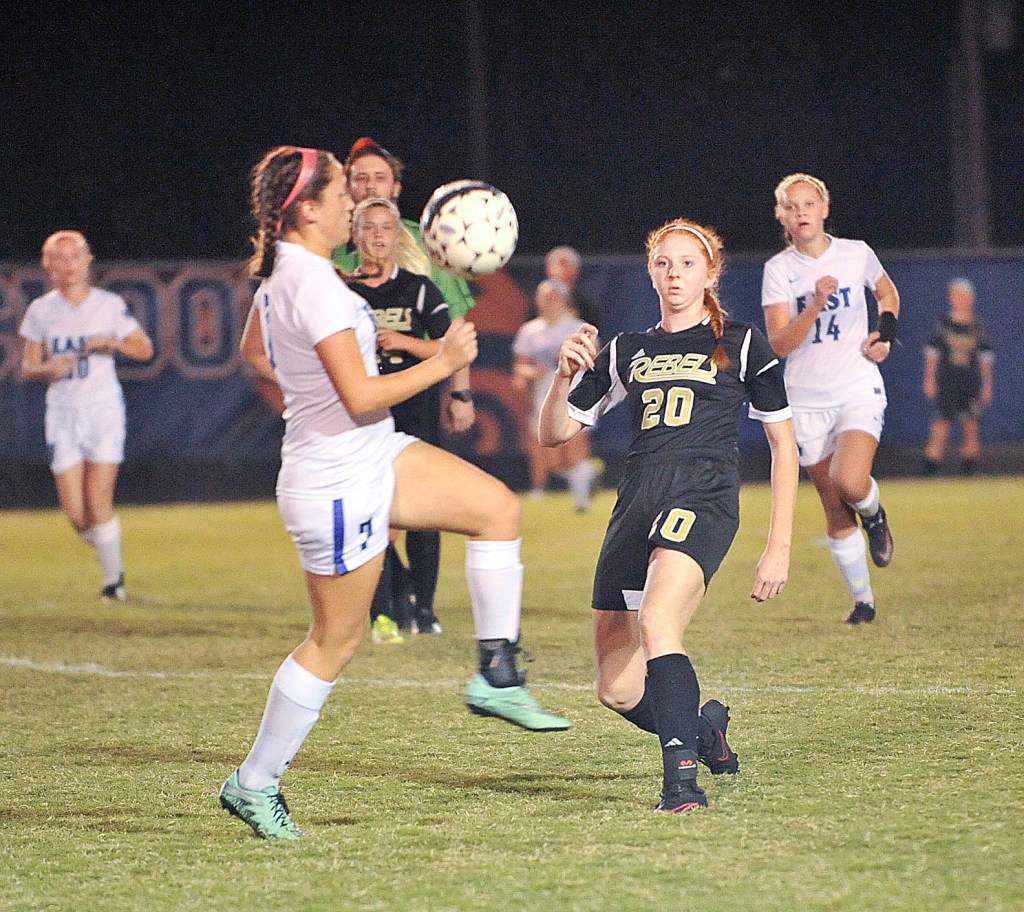 SOMERSET — At the conclusion of last year’s 12th Region girls soccer tournament, Boyle County was on top of the mountain, thanks to a victory over West Jessamine in the championship game. And in 2014, it was the Colts topping Boyle County in the region final.

Tonight at Southwestern, these two 12th Region powerhouses will meet for all the marbles once again for the third year in a row.

Boyle County punched its ticket to the title game by holding back a spirited East Jessamine squad with a 4-1 win Wednesday night, improving its record overall on the season to 24-1.

Rebels coach Brian Deem said his club didn’t necessarily bring its A game to the matchup against the Jaguars, but the bottom line is the fact the Rebels are playing for a region title yet again.

“I thought tonight we kind of went out there and was just scrambling and were very unorganized,” Deem said. “We went in and talked to our kids at the half, and I was upset, and I

Focused. I put this one on me, and they were able to fight through it and get two goals by halftime. At the half, we made a few adjustments and they came back and did a good job of the second half.”

The Rebels two big offensive threats certainly came through at crunch time when their club needed them the most.

Kylie Thompson and Emmie Harris scored two goals each, and that duo helped break open a scoreless affair late in the opening half of play. Thompson’s first goal of the contest came with just over 13 minutes left in the first period, giving the Rebels the lead for good at 1-0.

A goal by Harris off a free kick with 3:55 left in opening half extended the lead out to 2-0 — a deficit that East Jessamine club could not overcome.

The Rebels eventually stretched out their lead to 4-0 in the second frame, once again thanks to Thompson and Harris, who also scored a goal each after halftime.

East Jessamine finally broke through and got on the board with 6:48 remaining in the contest, thanks to a free kick from Sarah Rocco.

With the win by Boyle County, it sets up a showdown for the third year in a row that will pit the Rebels up against West Jessamine.

And something will certainly have to give in this monumental clash at 6:30 p.m. tonight from Southwestern.

The Colts bring a 19-4-1 record into the finals, which includes a perfect 7-0 mark against region foes. Boyle County meanwhile is a perfect 8-0 this season against teams inside the 12th Region. Thursday’s championship game between the two clubs will mark their first

meeting of the season.