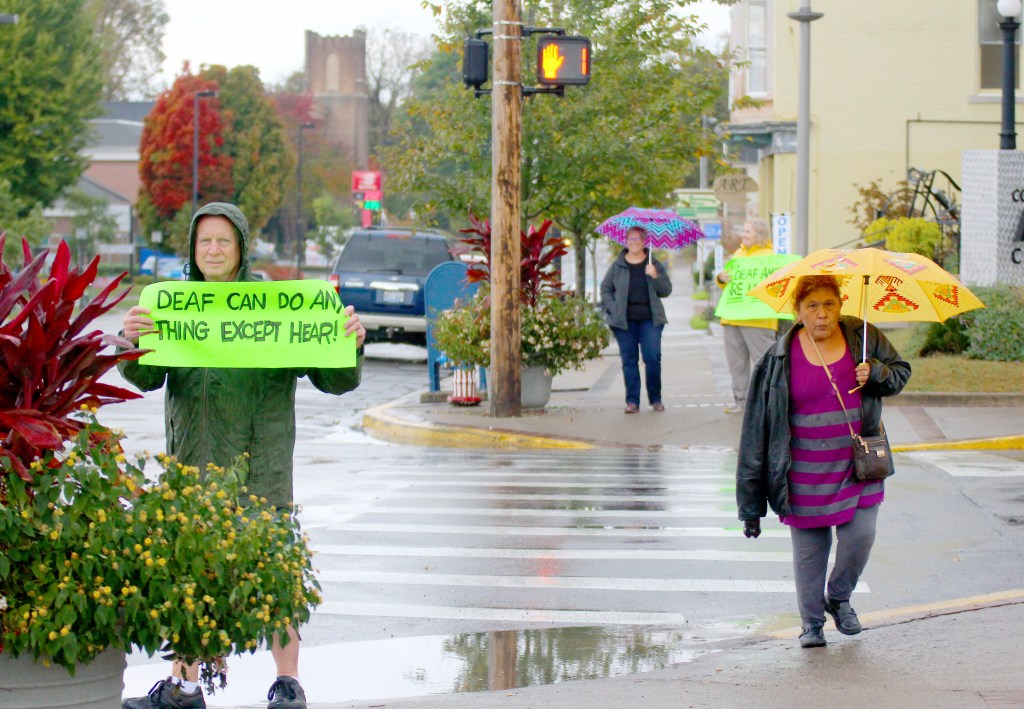 Ben Kleppinger/ben.kleppinger@amnews.com George Andre, left, holds a protest sign at the corner of Main and Fourth streets in Danville Thursday.

Deaf people across the nation took part in Deaf Grassroots Movement rallies Thursday to protest issues of inequality for deaf people in the areas of education, communication and jobs.

In Danville, deaf people stood on the corners of Main and Fourth streets, holding signs and talking with people through an interpreter.

“I want to show people that deaf people — they need jobs. And hearing people keep pushing deaf people away,” said George Andre, one of the protesters.

“Deaf can do anything except hear,” one protest sign read.

“American Sign Language is a human right, it is not merely an option,” said another, quoting Dr. Roz Rosen.

Barbie Harris, an organizer of the Danville event, said there are many obstacles deaf people face today, from difficulty in getting a job to a lack of good educational options.

Harris said members of the deaf community are pushing for legislation in Kentucky called “LEAD-K,” which stands for “language education and acquisition for deaf kids.” The K also represents the need for improved early childhood education for deaf children before they reach kindergarten, she said.

Only six states have passed LEAD-K legislation; there are people trying to get it introduced to the Kentucky legislature, she said.

Harris said deaf children need to be exposed to language early in their lives. Many people don’t think children are capable of learning, but they can actually start learning “as soon as they’re born,” she said.

Harris said there is a definite need for LEAD-K in order to modernize how the education system treats deaf children.

One problem has been teachers who aren’t fluent in American Sign Language. Deaf people have no problem with hearing teachers teaching deaf children, but they should be able to communicate directly with the students, Harris said.

One of the protest signs addressed this problem, reading “Bring back teachers who use ASL.”

“We have awesome teachers at KSD (Kentucky School for the Deaf in Danville) but times have changed, philosophy has changed,” Harris said. “So we need to iron out the details.”

Harris said getting a job is a big problem for deaf people today. Many of the jobs deaf people used to do have been replaced by technology, such as printing, she explained.

Francine Kenyon, who said she is the first deaf Chinese Hawaiian graduate of Wesleyan Theological Seminary, said as a deaf child, she was held back initially because teachers didn’t think she was capable. When she excelled in math, a teacher said she didn’t understand how Kenyon was doing so well because she was deaf.

Kenyon said there are thousands of deaf people in every state, but many fly under the radar because they stay home or are kept home, away from the public.

“That’s a huge issue that needs to stop,” she said. “Deaf people need to do and can do everything that hearing people can do.”

“Maybe some day, there will be a deaf person running for the United States presidency,” she said. “I’m hoping for that.” 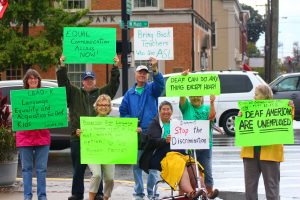 Ben Kleppinger/ben.kleppinger@amnews.com
A group of people participating in a protest hold their signs up at the corner of Main and Fourth streets in Danville Thursday morning.