Mary Fred (Leedy) Schnitzler, 86, of the Ottenheim Community of Waynesburg, passed away Wednesday, Oct. 19, 2016, at Ephraim McDowell Regional Hospital. She was the wife of Ernest John Schnitzler whom she married on Oct. 4, 1956. 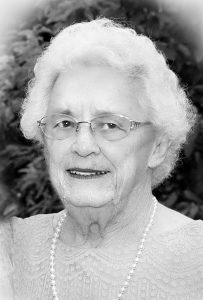 Mary was born in Benham, Harlan County, Kentucky on April 24, 1930. She was a daughter of the late Ralph Edward and Margaret Ruth (Baldwin) Leedy. Mary had formerly worked as a House Mother for the Pittsburg School for the Deaf and had also worked for Kentucky Utilities. She was a former member of the Ottenhiem Homemakers and a past president of Highland Elementary PTA. Mary was a long time member of the Stanford Christian Church.

In addition to her parents, Mary was preceded in death by sister, Margilee “Bay” and husband Bud Harris, and sister-in-law, Jerry Leedy