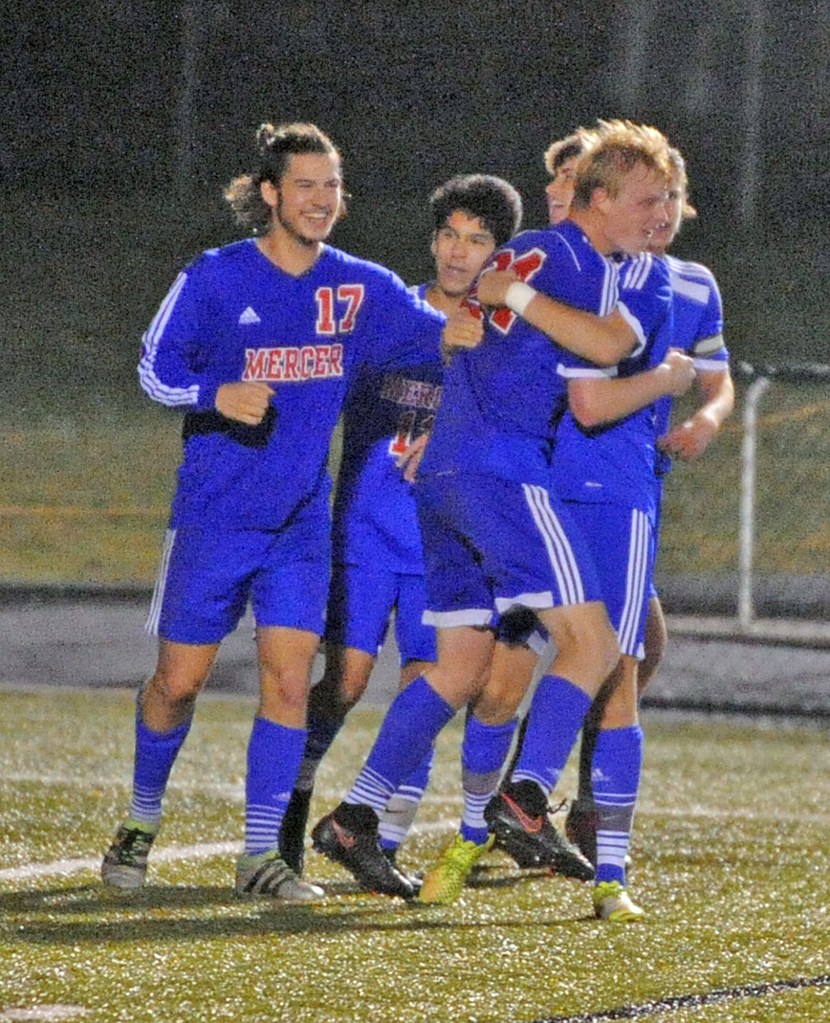 It wasn’t pretty, but Mercer County again found a way to win in the 12th Region tournament championship.

The Titans defeated West Jessamine for the fourth time this season in a challenging  2-0 victory at Boyle County. The win was Mercer’s 21st of the season, 16th shutout of the season and second straight 12th Region championship.

“Playing three games in a row is tough, the guys were feeling the pain tonight, but they were able to fight through and play with a lot of heart tonight and come out with a win,” Mercer coach Garrett Stark said.

Three games in three days is tough, but the competition Mercer has faced made it all the more challenging. Boyle County took the Titans into overtime on Wednesday, but they came back and fought for another gritty win.

Mercer’s first goal of the game came in the middle of the second half on an own-goal. Marcus Lewis sent in a corner kick and West Jessamine’s Elijah Young mis-kicked and sent the ball into his own net.

The Titans’ defense held strong against another team wanting to play a counter-attacking style, Stark said.

“Defensively we played really well tonight,” he said. “We stayed connected a little bit better defensively, we didn’t get caught in transition like we did last night. That was a big help to get us the shutout tonight.”

West Jessamine keeper Trey Miller made a pair of fantastic saves to keep the game close for West throughout the game.

“Again, it was great keeper play from our opposition,” Stark said. “It has happened the last two nights. It’s great for their programs because their keepers have played well. But we had chances, and these are games where we’re attacking with speed, we’re attacking with width. We’ve got a lot of attacking players. Our outside backs attacked really well tonight.”

West coach Brock Southerland was proud of the way his two captains — Miller and Young — played. The pair were joined by Oluwadunsin “Dunsyn” Adeliyi on the all-tournament team for the Colts.

“If Trey doesn’t make some of those saves, we get beat 5-0,” Southerland said. “He’s been brilliant all season long. Elijah has been dominant at center back. That’s why these two are captains, they give their heart and soul every time out there. Dunsyn, he’s had a really good season. Talk about a turnaround for a kid, attitude and character. He’s been a bright light for this team, he’s been a leader. After he got hurt, it hurt us. He means too much to the team.”

Southerland said he and his team didn’t expect to be in a championship game after a slow start to their season.

“We were talking on the way down here, midseason we never thought that we’d make it this far,” he said. “But it’s not about how you start, it’s about how you finish. We really came along real well toward the last part of the season. The competition we played was top notch, and we were in every game … Against Mercer County, they’ve been dominant. They’ve only lost two games all season long. I wanted to play closer to them than we had the first three times, and we did that. We gave ourselves a chance to win.”

Dean, a senior, was named with senior teammates Cody Shackleford, Brandon Ballard and Chase Edwards on the all-tournament team.

In the end, it was about perseverance for the Titans. Three games in three days, an overtime and a lightning delay weren’t enough to knock the defending champions off course.

“The last few years, we’ve talked about playing to the highest standard that we can,” Stark said. “The senior alumni that have come through the program have set the foundation for what the program is built on, and every year we strive to make it stronger. This year’s senior class has stepped up and created a lot of good memories this year. Hopefully the younger guys have seen that and will continue to do that for years to come.”