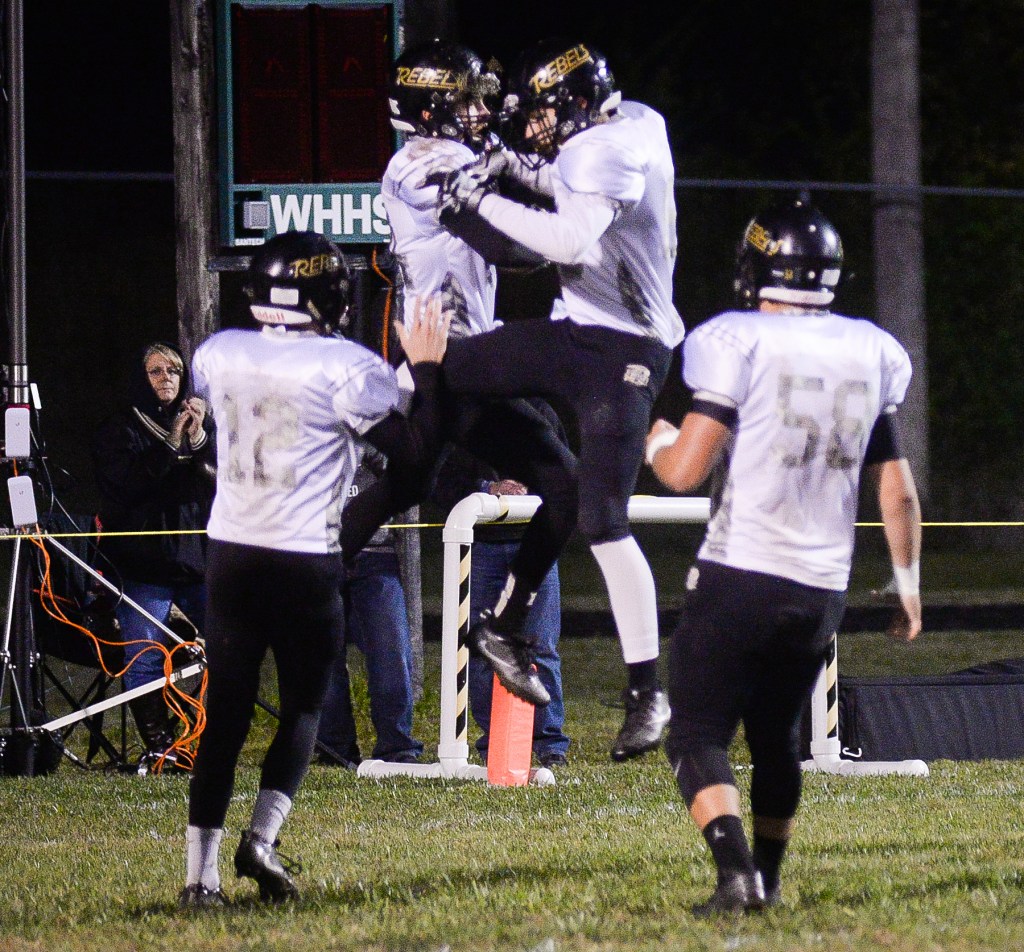 Hannah Brown/Special from The State Journal Boyle County celebrates after scoring a touchdown during the game against Western Hills High School at WHHS Friday night.

Special to The Advocate-Messenger

Boyle also picked up a touchdown in the closing seconds on a 60-yard run by freshman quarterback Grant Hotchkiss.

Coach Chuck Smith’s Rebels improved to 5-4 overall and 2-1 in district play heading into the regular season closer Friday at Dunbar.

Boyle County was easily able to overcome another monster night by the Wolverines’ Robinson, a sophomore running back, who rushed 18 times for 222 yards and scored all three WHHS touchdowns.

Robinson’s scoring plays came on runs of 10, 98 and 63 yards. He came into the game averaging 165 yards rushing per game.

“We came in knowing they had that great running back,” Smith said of the powerful 5-foot-7, 160-pound Robinson. “And we never did tackle him. He had a bunch of yards. He probably broke a state record.”

Robinson’s 98-yard run up the gut gave the Wolverines a 14-7 lead just eight minutes into the game, after his 10-yard run had opened the scoring.

“I felt like we did a really good job right off the bat,” Western Hills coach Don Miller said. “We got some good blocks, and WanDale was able to take those two to the house, and I felt like we were in pretty good shape.”

The Rebels, however, didn’t take much time to halt hopes of a Western Hills upset.

The visitors capped a 58-yard drive with a 2-yard run by Crawford to tie it at 14-14 and then struck for two quick touchdowns late in the second quarter to seize control with a 28-14 halftime lead.

Reese Smith’s 35-yard reception from Tiller put BCHS up 21-14 with 2:37 left in the second quarter, and then Ashburn plunged in from a yard out with 28 seconds left in the half to up the margin to 14.

Boyle County sealed the game for good early in the third quarter after junior Chandler Johnson of Western Hills recovered an onside kick to open the period at midfield.

Western Hills drove some 25 yards from there, but junior quarterback J’Len Youngblood just barely overthrew Trevor James and Boyle senior defensive back Evan Tarter intercepted the pass in stride, racing from his own 12-yard line to the Wolverines’ 30.

The Rebels took it in from there, capping the short march on a 15-yard run by Ashburn. Ruby’s kick upped it to 35-14.

Western Hills closed within 35-21 90 seconds later on Robinson’s run of 63 yards, but it was too little, too late to slow Boyle County.

“I was proud of the way they regrouped after a slow start,” coach Smith said. “That interception (by Tarter) was big, but I think it really came back to the offense. They just took over the game.”

Miller bemoaned five turnovers — three interceptions and two fumbles — that thwarted any chance for sustained momentum for his team.

“When you’re playing a quality team like that, you get five turnovers and it’s going to be hard to do anything,” Miller said.

“They’re a very good fundamental team, offensively and defensively,” he added. “You have to be that way if you are going to win ball games. And then, they also have the numbers.”

“We’ve got some depth, and a lot of them are young guys,” Smith said. “Hopefully we can keep on keeping on.”

Photo by Hannah Brown/Special from The State Journal Boyle County’s Evan Tarter attempts to avoid a hit from Western Hills’ Trevor James during the game at WHHS Friday night.

Photo by Hannah Brown/Special from The State Journal Boyle County’s Trintin Ashburn fakes a handoff from Sam Tiller during the game against Western Hills High School at WHHS Friday night.