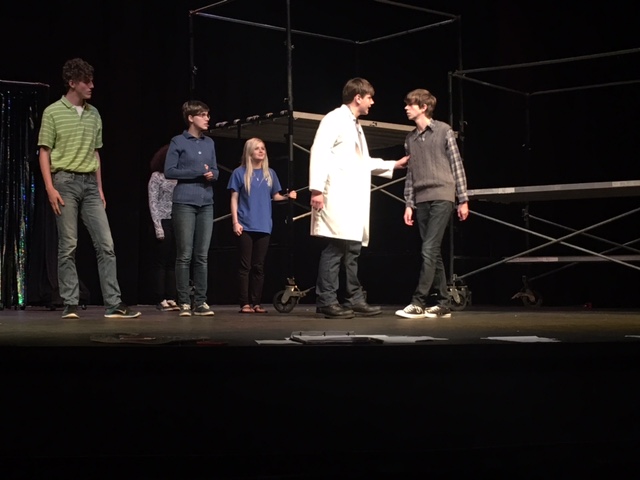 By Bobbie Curd The cast of "A Wrinkle in Time" practices at Danville High School for the upcoming fall play.

Jane Dewey describes Danville High School’s fall play offering “A Wrinkle in Time” as having a sense of timelessness. “It’s like a journey unfolding before our eyes, to all of these fantastical places but only in our imagination.”

Dewey, who is the district’s director of arts education also directs the piece. “It’s just really interesting to me, and how to show that magic on stage without using a lots of bells and whistles. I love that kind of work — it really speaks to me.”

The stage is set up with metal scaffolds on wheels, some iridescent sliver curtains and three simple wooden cubes, all used to transform the stage into whatever magical place the characters have ventured off to.

This play fits the fall play bill for a number of reasons, Dewey says. DHS tries to provide a variety of dramatic literature for students to engage with as productions, like musicals, comedies, dramas and the occasional classical piece and adaptations of literature.

“‘A Wrinkle in Time’ fits that last category,” Dewey says. Written by Madelleine L’Engle, the book was first published in the 60s and won several awards for outstanding literature, including the Newberry Medal, she explains. The cast and crew will also be performing the piece at the Educational Theatre Association’s Kentucky Chapter Thespian event Oct. 28-29. “There are strong roles in this play, including many strong female roles,” she says. Dewey feels the play will appeal to a wide variety of folks — especially since many have read it and can identify with the main themes. 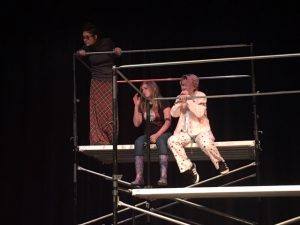 “Finding out something about yourself as you go on a mysterious journey to help someone else — in this case, the children’s father — and the fact that good and evil aren’t necessarily clear-cut. These themes are timeless.”

The story leaves the audience rooting for the children, and their friends and family, while at the same time understanding the appeal of a world where decision making has been given over to someone or something else, Dewey says.

“For audiences, this story engages on many levels, as strong literature does, and can appeal to many age ranges. Children may be entranced by the three magical women — Mrs. Whatsit, Mrs. Who and Mrs. Which. Young adults might be interested by the journey of the teens, and adults might think about the questions of goodness and evil — and how the easy answer may not always be the best answer.”

Dewey says while the book was often said to have been partially inspired by the Cold War, she does see parallels to some of our political and global issues of today.

The cast is a mix of ninth- through 12-graders, some who have been performing since elementary or middle school. “Each one has a unique story to bring and part of the beauty of working with them is seeing how they grow in their ability to value what each of them brings.”

As a group ensemble, the whole play relies on the cast and crew working as a team. Dewey says it’s been fulfilling to watch the kids all rely on one another more, creating this magical piece using only three large prop items on the stage to completely transport to different lands. “And how they make each other shine that much more together on stage. It’s just something I really enjoy watching.” 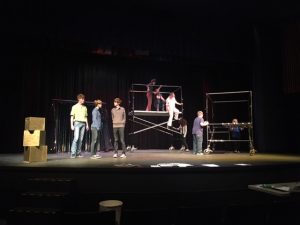 She hopes the community will come out and enjoy it, too. Tickets are available at the high school’s office, or 30 minutes prior to each show. All ticket sales support the theatre program, as well as students’ travels to the state-wide high school theatre festival.

Sponsorships are available to help the students’ acting program, as well as an Adopt-A-Seat fundraiser anyone can join. For more information, email jane.dewey@danville.kyschools.us.

“A Wrinkle in Time” 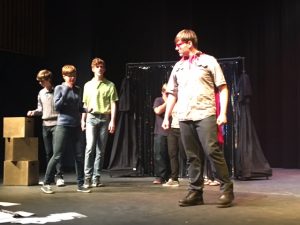 • “One Wrinkle in Time” follows the story of Meg, an outcast teenager her brother Charles Wallace, and their friend Calvin as they set out “one dark and stormy night”, on a mysterious journey through time and space to rescue their lost father. Along the way, they encounter supernatural characters, both good and evil, which shape the children’s lives in ways they do not expect.