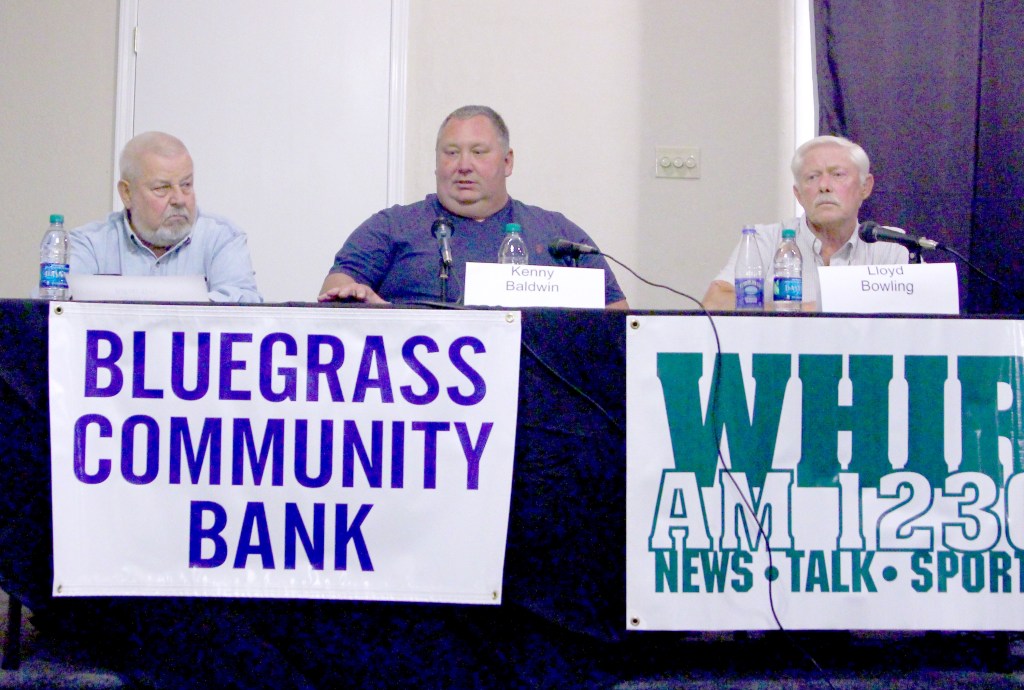 Photo by Ben Kleppinger/ben.kleppinger@amnews.com Junction City Council members from left, Steve Martin, Kenny Baldwin and Lloyd Bowling participate in Thursday night's forum. Four other candidates, including three other incumbents and one challenger, were unable to participate in the debate.

JUNCTION CITY — Three of the seven candidates for Junction City Council were able to attend a public forum Thursday night.

Some of the most interesting answers came to a question about the Danville-Boyle County Economic Development Partnership.

Nelson asked what the candidates thought of the EDP and what Junction City’s role in the EDP should be.

“I don’t have a comment on that one,” Martin said, and passed the microphone to Baldwin.

Baldwin said he would like to see more economic development in Junction City but the city is “truly limited.”

“We do have some areas that would be nice to develop but we’re almost like at the bottom of the food chain in my opinion when it comes to the economic development part being pushed our way,” Baldwin said.

Bowling responded that “I can’t recall anything the EDP has ever done for Junction.”

“It’s just like Junction don’t exist for the EDP,” he said. “It seems like Danville and Perryville get anything they want. If they get businesses, that’s where they’re going to put them. They won’t bring anything south … to benefit us.”

Bowling was similarly critical of county support for Junction City on another question about whether the city could benefit from having a Main Street program like Danville and Perryville have.

Bowling said Junction City once asked about the possibility of having a Main Street program.

“We were pretty much told that wasn’t allowed. And that came out of the Boyle County Courthouse, so that pretty much shot it down,” he said. “… They won’t work with us like they work with Perryville.”

On the same question, Martin answered simply, “I really hadn’t thought about that.”

Baldwin said he thinks Junction City could benefit from such a program because it could help the city land more grant funding and restore or protect historical buildings. 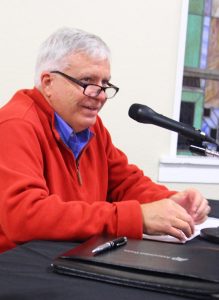 Asked about the biggest issue facing Junction City, Martin and Baldwin said they think the city is running smoothly and isn’t facing any big problem.

“I don’t think we’ve got any really major issues; the city is in pretty good shape,” Martin said. “The biggest thing I’d like to see is everybody in Junction City run for council.”

“I’m really proud of what we’ve done in this community,” Baldwin said. “From a standpoint of actually having anything outstanding as far as debts, we do not have any debts and that goes back to the council working well together.”

Bowling said the city could benefit from a new municipal building to house things such as the fire and police departments.

“Hopefully that will come to pass,” he said. “Our buildings right now are in pretty bad shape. They’re so old they can’t be updated — I mean, it’s not feasible.”

On the topic of building a municipal center, all three candidates said they would be willing to take on a limited amount of debt to make the building happen, but nothing that would leave the city in financial trouble.

All three also agreed that the current cemetery ordinance is operating as it should and enforcement should continue. The policy of removing loose decorative objects has made some angry, but is necessary to protect safety of city employees maintaining the cemetery, they said.

The candidates were asked what they would like to do about pedestrian safety at the intersection of U.S. 127 and Shelby Street.

Martin said Junction City Mayor Jim Douglas “has looked into” the issue and will let the council know what he finds out.

Baldwin said there have been problems with a southbound caution light along U.S. 127 as well.

“I personally contacted the state and asked could we get a stoplight down there?” Baldwin said. “And their response to me was until there are adequate fatalities, then it would be up to us to pay the cost.”

Baldwin said lighting is a problem at the Shelby Street intersection and the state has said it will be up to the city to do anything about it.

“If it needs to happen like that for the safety of the community, then yes sir, I’m for it,” he said.

Bowling said the city is in the process of trying to get permission to put up lighting from the state.

“We should hear something pretty shortly about that,” he said. “Our hands are tied doing anything until then.”

Nelson asked what can be done to stimulate community pride and generate involvement in community festivals or events, citing Railroad Days as an event that used to be a big event for the city.

Martin said Railroad Days used to be very successful but many of the people who had been involved in it have either died or moved away.

Baldwin said there are some successful events such as Trunk or Treat, which is coming up on Oct. 29 and will include a chili cook-off. He acknowledged participation in community events has dropped off.

“It’s almost like the younger generations have shown no interest in it, but we’re trying to work back toward having involvement in the community,” he said.

Bowling said “Railroad Days is a thing of the past,” but the Trunk or Treat event is very successful.

All three agreed it would be nice to have 24/7 police coverage in city limits without relying on the Boyle County Sheriff’s Office and Kentucky State Police in the early morning hours, but that the city can’t afford to expand its police department to a 24/7 department.

All three also said they were strongly opposed to the plan from energy company Kinder Morgan to reverse the flow of a natural gas pipeline and use it to carry potentially dangerous natural gas liquids.

The other four candidates for Junction City Council are Hershel Fletcher, Pete Kendrick, Sonya Kitchen and Bill McCowan. Kendrick is the only candidate who is not currently on the council.