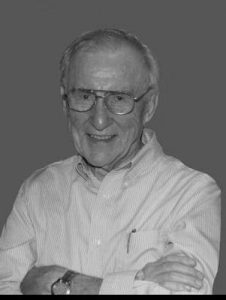 Dick was born in Milwaukee on June 23, 1928, and met his future wife Virginia (Ginny) there when they were in high school. Dick earned his BA and MBA from the University of Wisconsin-Madison and has a fulfilling career in management and labor relations; the highlight were working as a publisher of the Austin (MN) Daily Herald (1966-1969) and the Council Bluffs (IA) Daily Nonpareil (1969-1989).

Dick and Ginny moved to Danville in 1994 following his retirement and lived there until they moved moving to Richland in September 2007. Dick was active in Rotary wherever he lived and was named a Paul Harris Fellow while in Danville. He introduced the Gull Lake Area Rotary Club to a project that he helped establish while living in Danville, to provide dictionaries to third graders. He also was active in the First Presbyterian Church of Richland and will be sorely missed by the Rummage Sale volunteers there. Dick was passionate about physical fitness and took up yoga in his late 80’s.

A Memorial Service to celebrate Dick’s life will be held at the First Presbyterian Church of Richland on Oct. 27, 2016, followed by interment in the Church’s Memorial Garden. Memorial contributions in Dick’s honor may be directed to the Gull Lake Area Rotary Club, P.O. Box 291, Richland, Michigan 49083 or Rotary International.

Personal messages for the family and/or favorite memories may be placed at www.farleyestesdowdle.com