Clinton: a vote for public schools

As a first-time voter, I feel let down by my nation. With the presidential election of 2016 just a month away, I find myself disappointed in the potential outcomes. 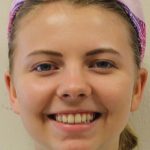 Despite my reservations with both major-party candidates, I am choosing to vote against candidate Donald Trump.

As a student, teacher’s daughter and lover of learning, I am fiercely interested in educational policy. According to the Pew Research Center, American students ranked 35th out of 64 nations in mathematics and 27th in science on the most recent Program for International Student Assessment. Thousands of public school districts are forced to endure insufficient funding, outdated facilities, underqualified teachers and low graduation rates. Donald Trump proposes investing $20 billion towards school choice, which would allow students to attend private or charter schools despite their circumstances. That sounds awesome, but this plan would completely demolish the public school system in the U.S. and would distract from the real issues in education. Private and charter schools are less likely to advocate for impoverished students or children with learning or behavior difficulties. Mr. Trump’s desire to give “every inner city student in America trapped in a failing school system the freedom to attend the school of their choice” sounds nice, but it’s not a viable option.

In contrast, Secretary Clinton wants to improve the current school system, targeting the real issues including poverty, outdated training for teachers and buildings that are unproductive for learning. Her proposal aims to “launch a national campaign to modernize and elevate the profession of teaching” by better preparing teachers and paying them an appropriate salary, providing states funding to upgrade their computer science programs to prepare students for jobs, building onto the Build America Bonds program to upgrade school buildings and using funding to take down the school-to-prison pipeline. Instead of tearing down public schools, Mrs. Clinton offers a realistic plan to improve the way they operate by empowering teachers, communities and students.

While I agree with both candidates that the public school system is diseased, I do not support Donald Trump’s idea to enforce school choice because it will not solve any issues that are consistently pushing American students lower in international rankings. I admire Hillary Clinton’s devotion to improving America’s schools and focusing on the causes of their flaws. I find that both candidates reveal disappointing character, but it is clear that Mr. Trump is not prepared to fulfil his slogan to “make America great again.”