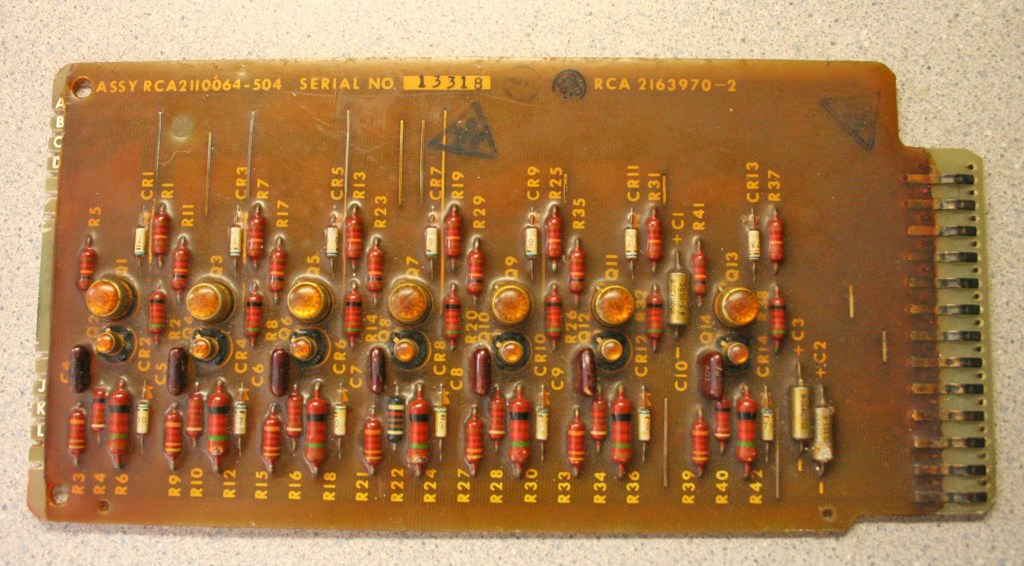 Kendra Peek/kendra.peek@amnews.com Part of a circuit board from an old computer, one of the items in Steve Amsley's collection from his time at NASA. 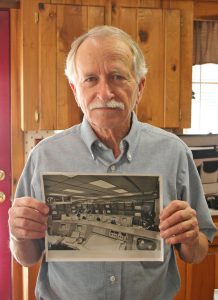 Kendra Peek/kendra.peek@amnews.com
Steve Amsler, of Garrard County, holds a photo of the room in which he worked while at NASA.

LANCASTER — Anyone can dream about the stars, but one Garrard County man can say he’s helped send people there.

Steve Amsler, 71, was attending the University of South Florida in the 1960s when he was recruited for a co-op program with the National Aeronautics and Space Administration (NASA). In 1996, he and his wife Debbie returned to her home community of Garrard County.

“I was still going to college at that point. They had called me into their office and wanted to know if I wanted to be part of the co-op program, working for a month or two and then coming back home for a month or two to go to school. I said, ‘Since we don’t have any money, I think that would be a good idea,’” Amsler said. “It scared me to death — NASA? Give me a break, I’m a kid from the country. But I just decided at that point to move forward.”

A native of Hillborough County, Florida, Amsler said he grew up without a lot and never thought that he’d one day work at NASA.

“I learned a lot. I did some things that I never thought I would do,” Amsler said.

When he started working at Mandy Station at Cape Canaveral, Florida, Amsler said it was just a collection of trailers and buildings. This was long before it became the Kennedy Space Center.

“The Kennedy Space Center wasn’t even thought of then,” he said.

Mandy Station was the number one facility for tracking launches, from space

Kendra Peek/kendra.peek@amnews.com
The way Amsley used to do calculations before digital calculators were available. This is one of the items in Steve Amsley’s collection from his time at NASA.

shuttles to military launches and more. One of Amsler’s jobs within the facility was to build a camera, known as a bore sight camera, to follow the rocket as it flew.

To retrieve the data, Amsler said, they eventually used a video recorder as large as a dining table. He worked on the launches of Minuteman, Pegasus, Jupiter, Atlas, Delta, Titan, Saturn 1, Saturn 1B, Saturn V and multiple military launches.

In the early years, Amsler had the opportunity to meet some of the first astronauts.

“They were partiers,” he said with a smile.

The original seven astronauts had to stay in the desert, he said, figuring out what to eat to prepare for launch.

Prior to and during launches, Amsler and his coworkers would monitor the data coming from the launch pad. They also controlled the video feed to all the television stations.

In 1969, prior to the Apollo 11 mission launch, Amsler was assigned the midnight-8 a.m. shift. There was an issue with the craft’s communications and he called launch control to get it fixed, going over his superior’s head. 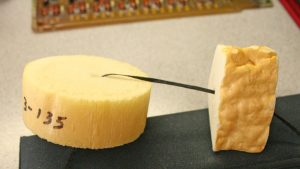 Kendra Peek/kendra.peek@amnews.com
Foam from a space shuttle. Part of Steve Amsley’s collection from his time at NASA.

“That was something that you don’t do. Most of those people are structured on who you can call. You don’t go over their head. I did,” he said with a smile.

He managed to get the issue fixed, but not without catching grief from his superior for doing something he wasn’t supposed to.

That technical fix Amsler helped orchestrate enabled the capturing of the world famous quote, “That’s one small step for (a) man; one giant leap for mankind,” by Neil Armstrong.

When Amsler was requested to serve in the military in 1970, NASA interceded, sending a draft deferment request on Amsler’s behalf, stating that his years of experience made him “invaluable.”

Amsler had the chance to meet President Richard Nixon while working at NASA, too, talking to him for some time.

In 2005, Amsler had the opportunity to return and tour the Kennedy Space Center with his wife while visiting a friend who still worked there. During that trip, he learned he was something of a legend.

“We had workers, one at a time or two, would come up on our sides and get behind us. They’re working there — they’re kitchen people, they’re other people, they’re just everybody. They get behind us. When we walked out to go to the next building, I said, ‘Jack what was all that where the workers were coming in?’ He said, ‘You don’t get it, do you? You’re considered a pioneer and a folk hero here.’”

Now, Amsler said he likes talking to students, encouraging them that they can achieve great things no matter where they come from.

“You don’t have to be rich. You can get there by being a good person and studying. That’s what I try to get across,” Amsler said.

Steve Amsler speaks to students about his experiences working at NASA.

Earlier in 2016, Amsler had the opportunity to visit the Challenger Learning Center of Kentucky, located in Hazard, which is one of 47 centers started by the families of the astronauts killed in the Challenger Shuttle explosion.

The Challenger Learning Center of Kentucky in Hazard can be found online at clcky.com.