If I were of voting age, Hillary Clinton would receive my vote. 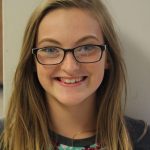 Clinton is qualified to be the next president of the United States. The main issue that sways me toward her is her stance on gender and how women are treated.

“It is way past time to end the outrage of so many women still earning less than men on the job,” she told an audience in California. Clinton would back legislation that would require businesses to reveal the data of gender pay to the government for review, which would allow women being unjustly paid to speak out. This would close the gender gap in a substantial way.

Recently, a video came to light of Trump vulgarly discussing how he was able to do anything to women because of his fame. Trump has excused this as “locker room talk.” Therefore, it’s not that big of a deal, right? Wrong. Such obscene things do not just “slip” out of one’s mouth. The fact he would use his fame to inappropriately touch a woman and it be okay is outrageous no matter the circumstances. Allowing Trump to become president would only increase his power. Is it a safe move to put a person capable of thinking such things in charge of the nation? Meanwhile, Hillary has continually talked of empowerment for women, regardless of the situation. Overall, she tries to lift up the people that need it.

Hillary Clinton is qualified and will steer this country in a brighter direction than Donald Trump can, maybe even allowing women to obtain more representation, respect and equality in the nation.