Still plenty to play for in Casey County 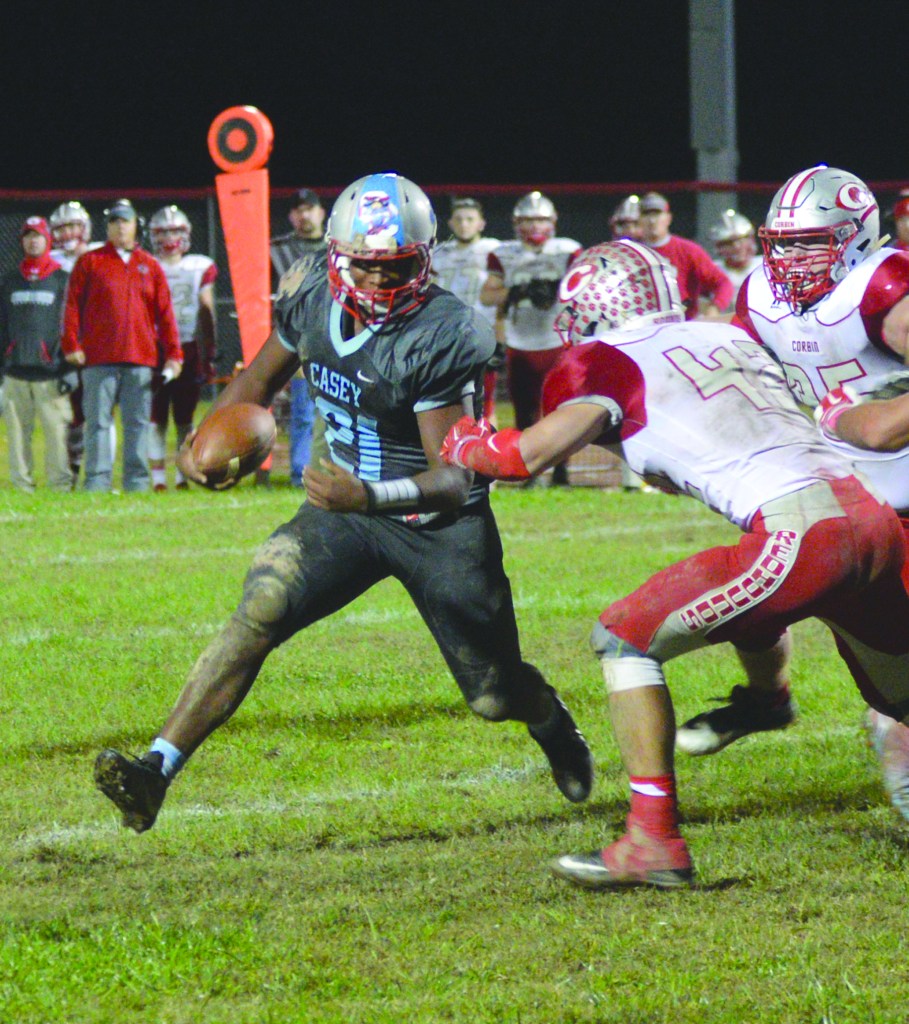 To say Friday’s game against Corbin was the biggest in Casey County football history couldn’t get too many arguments.

And while the Rebels lost 35-7, it’s safe to say it won’t be the last of those “biggest games in history” games they’ll face under coach Steve Stonebraker.

What the coach has done in Liberty has been darn near revolutionary. At 7-1, this is the best record in Rebels history. Quarterback Breece Hayes is having easily the best season of his career with 1,846 yards and 19 touchdowns, and running back Collin Miller is as well with 939 yards of offense and 19 TDs.

The Rebels will open the postseason with a home game, most likely against Powell County (4-5). From there, they’ll probably face Estill County in the region semifinal.

In the postgame huddle, Stonebraker broke it down for his players this way — with Corbin and Bell County on the other side of the region bracket, the Rebels are the favorites on their side in his eyes, giving them a possible rematch with the Redhounds in the region final.

“And wouldn’t winning a region title be that much better than a district championship,” he asked.

While the KHSAA hasn’t released its official playoff brackets as of yet, it’s easy to suss out which team is playing where and who.

In Class 2A, Danville hosts Allen Central (7-2) in the first round. Win there, and the Admirals would play against the winner of the Middlesboro-Leslie County game.

Boyle County will host Moore (7-3) while Garrard County travels to Louisville Central (5-4). The winners of those games will face off in the second week of the playoffs.

Mercer County will host Knott Central (4-4-1) in Class 4A; the Panthers ended Mercer’s season last year in the region semifinal. The winner of this year’s game faces either West Jessamine or Rockcastle County in round two.

And in Class 5A, Lincoln County will travel to face District 8 champion Whitley County (8-1).

You always hope a season isn’t remembered by one game, and hopefully that’s true with this year’s Boyle County girls soccer team.

Unfortunately for the Rebels, their season came to a grinding halt last week in a 2-0 loss to archrival West Jessamine in the 12th Region final. The two schools have battled in the last three region finals, so it’s easy to see why there’s such animosity between the two.

But to focus only on that result would be to ignore so much else — a 10th straight district title, a school record 24 wins, and a 105-16 goal advantage over opponents this year.

No one on the Rebels roster or coaching staff wanted to turn the page to winter sports this soon, but there was much to be proud of in yet another dominant season.

MEET ME AT THE NET

Boyle limped into last week’s 45th District tournament with two wins in its final 10 regular season matches, but none of that mattered as the Rebels won their first district title in nearly a decade. It’s safe to say they’re riding a hot streak heading into Monday’s game against Wayne County.

But don’t sleep on the runners-up to Boyle — Lincoln won 17 games to this point, including a seven-match winning streak late in the season, and the Patriots loss in the district final came in a five-game thriller.

Casey finished as runner-up in the 47th District, but the Rebels had 16 wins and an 8-2 record over the last 10 games entering the district final.

Mercer might have the least amount of total wins of the four entering the tournament, but the Titans won 12 of 20 matches against region opponents this season.

Yes, we are in Big Blue country — and congrats to the Cats on a thrilling win over Mississippi State — but as an Ohio State fan, I’m trying to forget Saturday as quick as I can. Unfortunately, some of my Facebook “friends” aren’t letting that happen.