Rebels rally from the brink, advance to semis 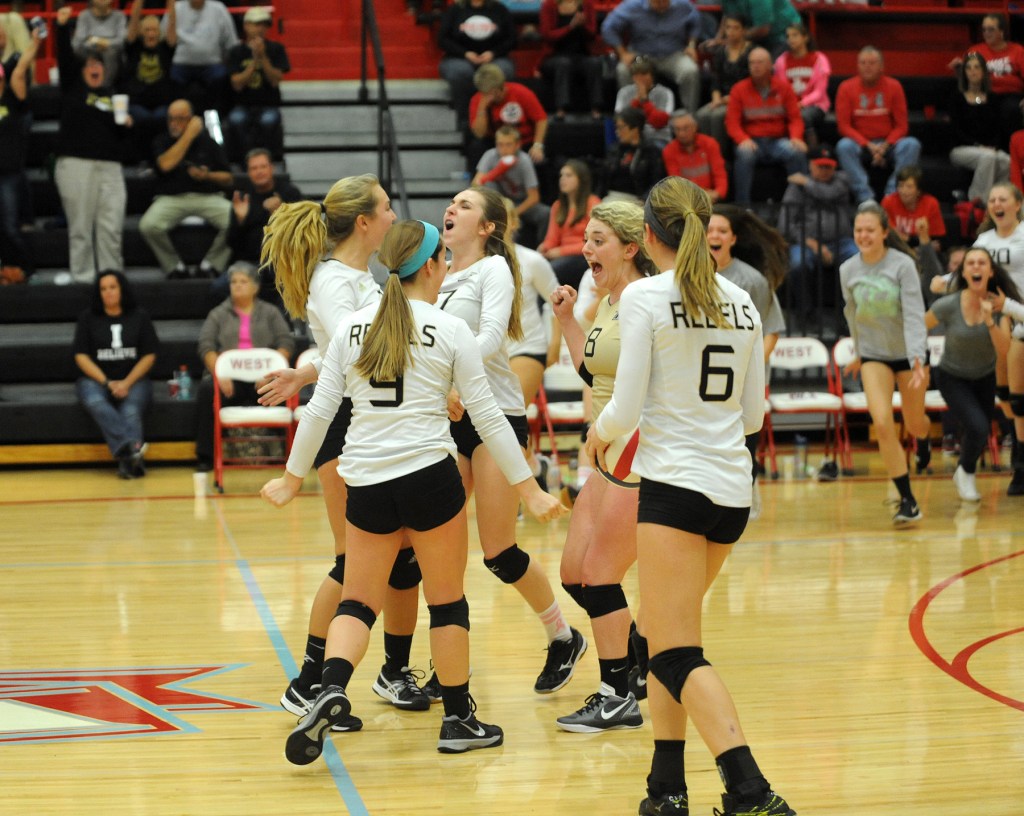 NICHOLASVILLE — At one point Monday night, when Boyle County was one point away from falling behind two sets to none, Andrea Craig was almost ready to consider replacement players.

By the end of the night, however, she wouldn’t have traded her players for any other team.

Three thrilling sets after the Rebels avoided falling into a hole that is usually all but impossible to escape, they scratched out a difficult victory over Wayne County in the first round of the 12th Region Tournament that gave the Boyle coach and her players at least one more match together.

“I think they’re probably the best team that we’ve played in a while,” Craig said. “I think we both showed up to fight, and at times we both lagged off and didn’t play the best we could. I think we just came out in that fifth set and played more solid than they did and ended up on the winning end.”

Boyle (18-18) survived its second-set scare, saw Wayne (13-19) bounce back in the fourth set, then took control in the fifth to advance to Wednesday’s semifinal round, where the Rebels will face Pulaski County.

“It was tough, but I’m really glad we won, because this is the first time I can remember we’ve made it past the first round of regions,” Boyle sophomore Mya Van Steenlandt said.

It’s the first time in six years, to be exact. The Rebels reached the regional finals in 2009 and ’10, but they have gone out in the first round in three regional appearances since, including each of the last two seasons.

And they seemed to be headed toward another early exit when they dropped a close first set and were trailing 24-23 in an even closer second.

Craig said she doesn’t remember everything that happened during the timeout that followed a run of three straight Wayne points, but she does remember that she challenged her team.

“I think I called them aside and said, ‘Look, either you’re in or you’re out, because right now I’m pretty sure I’ve got some other people that don’t even have a jersey on that could play better than you,’” she said. “I think that kind of motivated them to get more on task with what they were doing, and I told them to put their egos aside. I said, ‘Don’t play how you want to, but how you know you should.’”

That jives with the way Van Steenlandt remembers it.

“Our coach told us to stop playing for ourselves and play for the team, to be smart and communicate, and that really paid off in the end. That’s the only reason why we won,” she said.

Boyle scored back-to-back points, gave up one, then scored consecutive points again, closing the set on a kill by Sierra Dean to square the match. The Rebels then rallied from a 20-17 deficit in the third set, scoring eight of the last nine points and finishing on a kill by Van Steenlandt.

The fourth set was another matter, however. Wayne opened a 13-5 lead and later scored eight straight points to ensure a winner-take-all fifth set.

That’s when the Rebels asserted themselves. They took a 7-2 lead, repelled a run by the Cardinals and scored six of seven points to take a 13-7 lead that would not be threatened.

Boyle is 4-0 in five-set matches this season, and Craig said a fast start in the final set is critical to closing out such matches.

“Every time we go to a fifth game, I tell them, ‘It’s a race to 15, whoever gets there first,’” she said. “Any other set in that match, 15 doesn’t really mean that much, but in that set it means everything. They pulled out quick and stayed ahead, and that’s what finished it off for us.”

Van Steenlandt punctuated the decisive run with three straight powerful kills, and she said she felt like each spike was a little harder than the one before.

“It felt great,” she said. “We felt like a team, and we felt like a family instead of six individual girls. It felt good to have our team back together, and it got us hyped up.”

Craig said the Rebels must maintain that team-first attitude Wednesday when they face Pulaski County (24-4).

“Our biggest thing is keeping the mentality of you are a team,” she said. “You cannot do it on your own; it takes all six, and I think that’s what we lost sight of when we dug ourselves a hole tonight.”