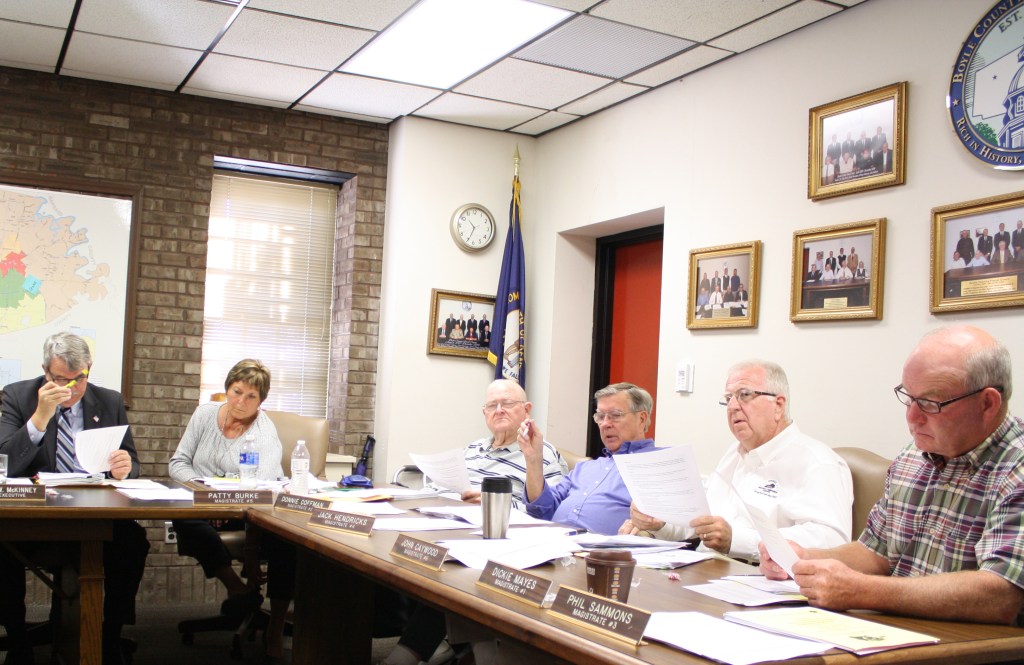 Kerry Steinhofer/kerry.steinhofer@amnews.com Members of the Boyle County Fiscal Court meet Tuesday morning to approve a request for proposals from companies that could run an outpatient drug treatment program.

Boyle County Fiscal Court has taken the next step toward opening a outpatient drug treatment center associated with the Boyle County Detention Center.

Magistrates approved Tuesday issuing a request for proposals for a substance abuse treatment program provider and a request for qualifications for consulting services for inmate confinement and rehabilitation for the jail.

According to the request for proposals, the fiscal court is looking for bids from companies to run the substance abuse treatment program, which would operate in a non-residential treatment facility setting as an alternative to incarceration with the goal of rehabilitating inmates. The program would run in partnership with the jail at a recently acquired facility in Danville for the inmates, according to the proposal.

The fiscal court is almost finished with a lengthy process of acquiring the old Red Cross building along South Third Street in Danville, which officials hope will serve as the home for the treatment program.

The deadline to submit proposals to the court is Nov. 23, and the fiscal court will review the proposals in December.

“I think we will get some interesting proposals,” Judge-Executive Harold McKinney said.

Right now, the fiscal court is not entirely sure what they want or what they are looking for with a substance abuse treatment center at the detention center, but there is adequate space at the newly acquired building for something to happen, McKinney said.

“When the bids come in, we will know what [the provider] wants,” Treasurer Mary Conley said.

Magistrate John Caywood said he wanted to make sure the fiscal court is prepared to make the program as good and strong as they can with the space provided.

In addition to the RFP, the fiscal court also approved a request for consulting services for inmate confinement and rehabilitation.

“Our goal here is to find somebody that we think can give us advice on how to move forward for the next number of years,” McKinney said. “This is our effort to figure out who needs to be helping us.”

McKinney said he received several numbers and people to contact from Rodney Ballard with the Kentucky Department of Corrections. He said he thinks there will be different groups that will want to collaborate on this effort, which is why the date for submissions on the request for consulting services isn’t until Feb. 6.

“What we are looking for is someone to guide us on where we need to go,” McKinney said.

Officials said it’s time to decide what to do about the jail — if a jail expansion is necessary, if a rehabilitation program is the right way to go, or if something else is needed.

“Do we want to build a jail for 700 inmates or help rehabilitate them?” Conley asked.

Brian Wofford said about 20 percent of the inmates are a danger to other people if they are released right now, but there about 80 percent who are currently incarcerated because of substance abuse.

The old Red Cross building special warranty deed and a space licensing agreement for the building were approved by the Boyle County Fiscal Court at its previous meeting. Kevin Caudill finished an appraisal of the building and now everything has been sent and is in the hands of the Red Cross, McKinney said.

“It’s a long winding road, but it will be ours,” McKinney said.