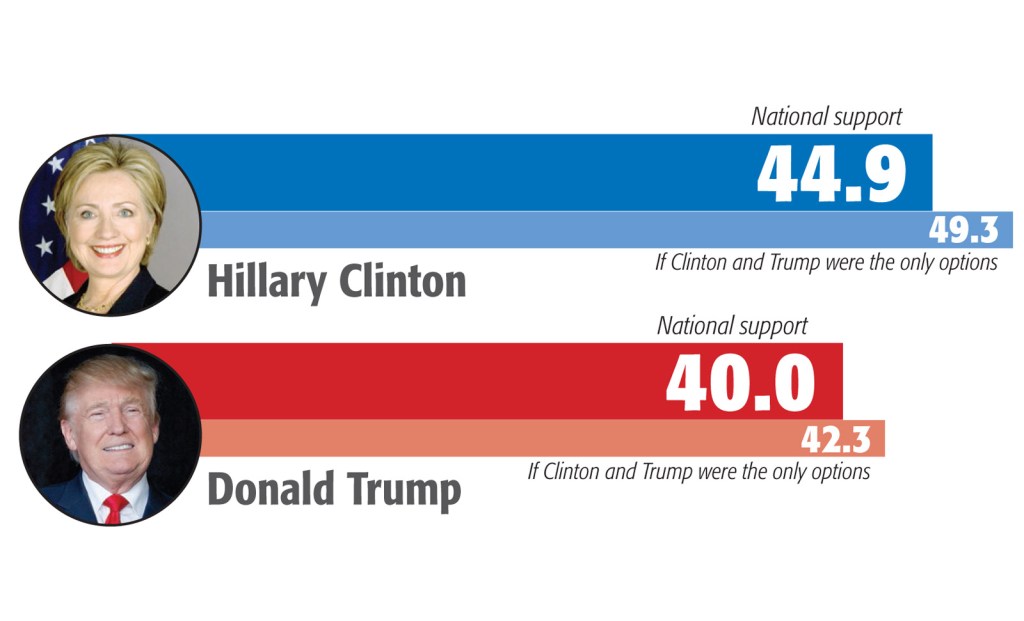 SOURCE: 2016 Colonel’s Canvass Poll from Centre College/Graphic by Ben Kleppinger A national scientific poll conducted by Centre College and Boyle County students between Oct. 18 and 23 estimated Hillary Clinton leads Donald Trump in the presidential race by almost 5 points. When survey responders were asked to choose only between Clinton and Trump, Clinton’s lead grew to 7 points.

A nationwide poll conducted by political scientists from Centre College shows that Hillary Clinton is maintaining a 5-point advantage over Donald Trump among likely voters for the 2016 presidential election. This lead increases to seven points when respondents are asked to choose between only Clinton and Trump.

Results from the poll also show that Clinton’s support among Democrats is stronger than Trump’s support among Republicans, and that Clinton is winning likely women voters by 17 percent, while Trump is winning likely male voters by 6 percent — further evidence of fallout from the release of tapes revealing Trump claiming to have committed acts of sexual assault and Clinton’s stronger performances in the three presidential debates.

The “2016 Colonel’s Canvass Poll” is a randomized, nationally representative telephone survey conducted Oct. 18-23. It sampled 710 respondents, 38.1 percent of whom were reached via landline and 61.9 percent of whom were reached via cellphone. The margin of sampling error for the survey is plus or minus 3.7 percent for the full sample and 4.1 percent for the likely voter sample.

In that spirit, the 2016 Fall Colonel’s Canvass Poll showed that Republican vice presidential candidate Mike Pence would win convincingly in a hypothetical matchup against Democratic vice presidential candidate Tim Kaine, 47 percent to 38 percent. This suggests that Republicans may have been able to comfortably win this year’s election if they had nominated a less controversial and more experienced candidate like Mike Pence.

Majorities of the public are also able to correctly identify Mike Pence and Tim Kaine as the Republican and Democratic vice presidential nominees, although Mike Pence is more well-known than Tim Kaine.

In all, 165 students from Centre College and Boyle County High School participated in fielding the survey and administering the questions to respondents.

The poll showed that Democratic candidate Hillary Clinton maintains an approximately five-point lead over Republican candidate Donald Trump among likely voters, 44.9 percent to 40 percent. Gary Johnson registered 6 percent support among likely voters and Jill Stein 0.9 percent. Further, 2.7 percent of respondents said they would vote for someone else and 5.4 percent are undecided.

When likely voters who indicated a preference for Johnson, Stein or some other candidate were asked who they would vote for if only Hillary Clinton or Donald Trump were on the ballot, Clinton’s share of the vote increased to 49.3 percent, compared to 42.3 percent for Trump. In this scenario, 5.8 percent of respondents said they would not vote if only Clinton and Trump were on the ballot.

“This is very similar to what we have seen in other national polls over the last few weeks,” Knoll said. “Hillary Clinton has maintained a fairly steady five- to seven-point lead over Donald Trump ever since the first presidential debate and the release of the Trump tapes revealing Trump’s claims of acts of sexual assault. Our poll findings are right in line with these national results, showing more evidence that these events moved the needle somewhat, and that the race is holding steady for now.”

“My take away from these findings is that Trump has lost support of about one out of every ten Republicans who otherwise would tend to support the Republican candidate in a presidential election,” Knoll said.

There is also a clear gender gap in presidential voting preferences, with 51.9 percent of likely women voters intending to vote for Clinton compared to 35 percent for Trump — a difference of 16.9 percent. Trump enjoys a smaller 5.8-percent advantage among men, 44.6 percent to 38.8 percent. When limited to only Clinton and Trump, Clinton’s advantage among women increases to nearly 20 percent (56.4 percent vs. 36.8 percent), and Trump’s advantage among men decreases to about 4 percent (47.1 percent vs. 43 percent).

Poll respondents were also asked to pretend that the presidential election featured only the various vice presidential candidates. In this scenario, Mike Pence was preferred by 47.3 percent of likely voters, compared to 38 percent who indicated Tim Kaine as their preference. Kaine was the clear favorite of likely Democratic voters at 70 percent compared to 11.6 percent for Mike Pence, while Pence and Kaine claimed 82.1-percent and 6.8-percent support among Republicans, respectively.

“This is important because it gives us a hint of what this election might have looked like if the GOP had nominated a more conventional candidate,” Knoll said. “Political science models indicate that this is an election in which the Republicans should be slightly favored to win. Instead, the Democratic candidate is currently winning by about 5 percent in the polls. If the Republicans had nominated a less controversial and more experienced candidate, they could very well have been leading by as much as 9 percent right now, as indicated by Pence’s hypothetical lead over Kaine.”

“It seems that Democrats like their candidate at the top of the ticket more than their vice presidential candidate, while the opposite is true for Republicans,” Knoll said.

There is a more pronounced difference between Donald Trump and his running mate Mike Pence. Among all respondents, 67.2 percent said Pence would make a better president compared to 17.1 percent who thought Trump would do a better job. Among Republicans specifically, Pence was still viewed as the better candidate than Trump, 59.8 percent to 33.1 percent respectively. Democrats also thought Pence would do a better job than Trump, 69.8 percent to 4.9 percent, with 23.1 percent saying that neither would do better.

“Once again, these findings seem to be showing that Democrats this year are enthusiastic about Hillary Clinton, while ambivalent about Tim Kaine, and Republicans are less enthusiastic toward Donald Trump while expressing much more confidence in Mike Pence,” Knoll said.

The full results from the Centre College survey, including margins of error, can be viewed online at bit.ly/CentrePrezPoll2016.

The 2016 Colonel’s Canvass Poll results were used by the well-known statistical news website fivethirtyeight.com on Monday to update its election forecast. At the time that the poll results were added, fivethirtyeight.com gave Hillary Clinton an 86.5-percent chance of winning the presidency. On Wednesday afternoon, Clinton’s chance of victory was sitting at 84.9 percent.