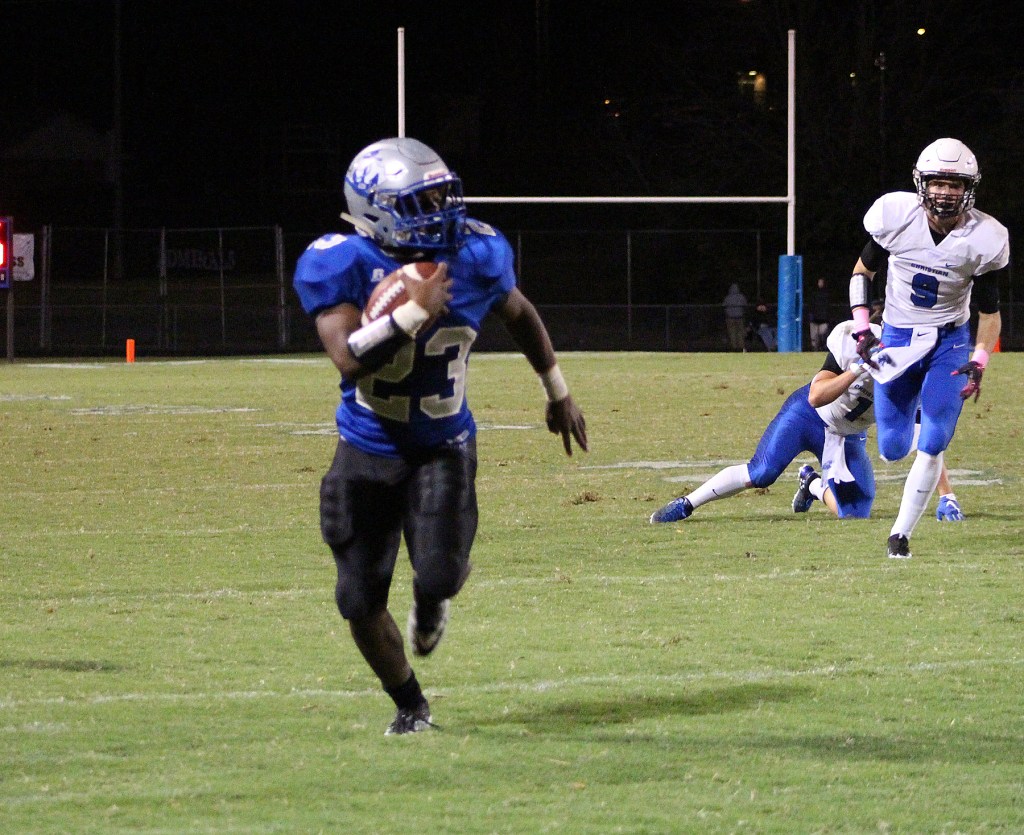 Friday’s loss to Lexington Christian wasn’t the result anyone on the Danville football team wanted, but if there’s a bright spot, it’s this — there’s still more football to be played.

For coach Clay Clevenger, the big message from the 42-40 loss — during which the Eagles charged back from a 26-7 deficit — was the need for improvement.

He pointed to the biggest difference between last year’s team, which went 2-0 against LCA and rang up 97 points in those meetings, to this year is youth. At any point during the 2015 games, Clevenger had as many as 10 seniors on the field. This year, the Admirals are ruled mostly by youth.

And so it was as they took their foot off the gas and allowed LCA to rally for an improbable win.

“I don’t whether it came too easy for us in that first quarter-and-a-half or what, but we definitely hit a lull at the half-quarter there in the second and all of the third,” Clevenger said. “We woke up by the fourth. We can’t have those lulls during four-quarter football games.”

But whatever the case was, the Ads get at least two more shots at wins, starting with this week’s regular season finale at Frankfort. Getting back out on the field after a tough loss could be just what the team needs.

“It’s important. Obviously, we didn’t get the result we wanted to last week, but we’ve still got some games to play and opportunities to do some things this year,” Clevenger said.

The Panthers are led on offense by a pair of juniors, running back Tremayne Jones and quarterback Holt Hammons.

Jones has rushed for 981 yards and 10 touchdowns this year after being the Panthers fourth leading rusher a year ago. He carried the ball twice in last year’s 56-6 Danville win.

Hammons seems to have taken control of the Panthers offense, playing in five games and totaling 592 yards and four TDs. Last week, he threw for 277 yards and two scores while completing 24 of 37 attempts.

“Frankfort has always got skill kids that run really well, and this year is no different,” Clevenger said. “They’re dangerous in that they have guys who can put the ball in the end zone anytime they touch it, so you have to be focused.”

Defensively, Frankfort has forced 18 turnovers, but they also give up 31 points per contest. Louisville Holy Cross and Kentucky Country Day combined to post 73 points on the Panthers over the last two weeks, both Frankfort losses.

“They’ve got a high-pressure team,” Clevenger said. “There can be some risks and rewards. Hopefully we limit their big plays on defense in terms of turnovers and we can get some big plays on offense in return.”

With offensive stars like quarterback like Zach Dampier, running back Donlevy Harris and receivers Dmauriae VanCleave, David Walker and Ellison Stanfield, the Ads could be the ones putting the pressure on the Panthers.

And that would be exactly what the Ads would like to see.