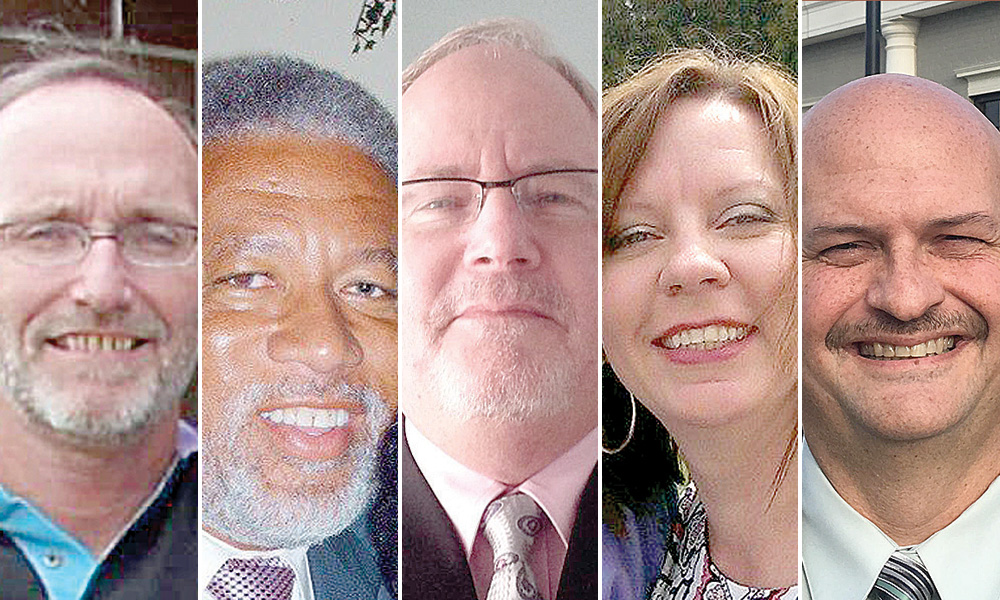 This election, there are five candidates running for the four seats on Danville City Commission.

A forum for Danville City Commission will be held 7 p.m. today at InterCounty Energy on Hustonville Road to help educate members of the community about the candidates and where they stand on certain issues in the community.

The five candidates running for city commission are:

• Rick Serres, a Danville resident for 32 years, is a current member of the commission and seeking re-election to a second term. He is a business owner and has been the president and principal of Bluegrass Biomedical for 28 years. He has worked as the cross-country coach at Centre College and Danville High School; and held several positions with the Parks and Recreation board. He has been a part of the biking and running community and said he supports the arts in Danville.

Serres said he has enjoyed working with the rest of the commissioners and the city.

Over the last couple of years, the city commission has enhanced the community in several ways and they are understanding the different aspects of the community, he said. Serres said there is also a greater understanding of the Economic Development Partnership strategic plan and Parks and Recreation.

“I don’t think the work is done,” he said. “There is more to do to enhance the community.”

• James Monroe was born and raised in Cynthiana. He is the lone challenger in the race, seeking his first term on the commission. At the age of 22, he became a dispatcher for the Indian River Sheriff’s Office, and then moved back to Kentucky and became an officer at Transylvania University. In 1995, he was hired by the City of Danville. He served in a multitude of positions for the Danville Police Department, including housing authority officer, patrol officer, detective, patrol sergeant, detective sergeant, patrol captain, operations captain, range officer, range master and departmental training coordinator.

After serving for 21 years, he retired from the Danville Police Department Nov. 1, 2015. He is currently self employed as an independent sales representative for First Tactical and Cormac Tactical.

“The morals and values that I was raised with have made me a public servant,” he said. “Before I retired, I knew that I would want to continue to serve my community in some manner. I explored a few options and decided the position of city commissioner was the best for me.”

Monroe said he feels like he has unique knowledge of the inner workings of the city.

“I have spent the last 20 years speaking with all of the citizens of this community, all economic groups, all racial groups and every citizen from criminals to judges,” he said. “These unique traits among the candidates will aid me in making good sound decisions about the direction of the city.”

If elected for city commission, he said his goal would be to improve the safety, economy, education, quality of life and cost of living for the community.

• Kevin Caudill, a current member of the commission, was born in Danville and lived throughout the southeast while growing up. He moved back to his hometown in 1974. He is a graduate of Danville High School and Eastern Kentucky University, with a degree in business administration. He has previously been the president of Danville Jaycees and Danville Kiwanis and is a 1988 graduate of Leadership Danville. He has volunteered for events in Danville such as the Brass Band Festival and the Kentucky State BBQ Festival. He was also a middle-school football coach for 22 years and is now a recreational league football coach for third- and fourth-graders.

“Having lived in a number of places growing up, I developed a deep appreciation for Danville and the people,” he said. “I want to help keep Danville the unique and viable city that it is while also understanding we, as a city and city government, have to adapt to changing markets and changing priorities — I enjoy being part of those changes.”

Caudill said he sees unfinished business and would like the opportunity to keep working in those areas. He said Parks and Recreation and the EDP strategic plan are two big areas that stand out to him.

“The city commission allows me to work with and be of service to many people I likely would not have met otherwise,” he said. “The emails, phone calls and texts I receive from folks needing assistance is one of my favorite parts of being a commissioner. My position as a city commissioner allows me the chance to experience that with a wide cross-section of our city’s citizens.”

• Denise Terry, a current member of the commission, was born and raised in Boyle County. She is a life-long resident of Danville and Boyle County, where she has raised her two daughters. She has been the owner of the Lily Manor Day Spa and Salon in Danville for 10 years. Terry is also a six-year breast cancer survivor.

Terry is in her first term and seeking her second term on the commission.

“After moving my business and my residence to the downtown area, I decided to get involved with Heart of Danville and also realized every local government decision affected me in some way,” she said.

She said she decided to start attending meetings to become more informed about what is going on in Danville-Boyle County. She was surprised to find that people in her generation and younger generations were not present or involved in the local government, she said.

“I began attending meetings regularly and decided to run for election with hopes of representing my generation — and point of view as a single parent/business owner — and leading by example to get them involved,” she said.

Terry said she is the youngest female commissioner to be elected; she was 38-years-old when she took office.

“I think it is important to have diversity and differing points of view on the commission, as well as the various boards and committees we work with and appoint,” she said. “Serving this city is my way of giving back.  Everyone has been so supportive of my business over the years and through my illness. Danville is home and I am trying to help make it the best it can be and looking to the future.”

• James Atkins has lived in Danville for more than 40 years. He has been married for 44 years and has two sons and four grandchildren. He graduated from Kentucky State University and Eastern Kentucky University and is a retired educator.

Atkins is running for re-election to his fourth term. He said he considers himself a public servant instead of a politician.

“I am running again because our citizens need a voice that will listen, study and vote for what’s best for all, and I strive to do just that,” Atkins said. “I still desire to serve without having any personal or hidden agendas, with plans to keep our citizens as informed on the issues as possible.”

The Danville City Commission forum is today, Oct. 27 at 7 p.m. It will be held at the InterCounty Energy Cooperative’s community room, 1009 Hustonville Road, Danville. The forum will be moderated by John Nelson, retired editor of The Advocate-Messenger. The forum will also be broadcast live on Hometown Radio, WHIR 1230 AM.