Colonels focused on next task with SAA title, NCAA bid in sight 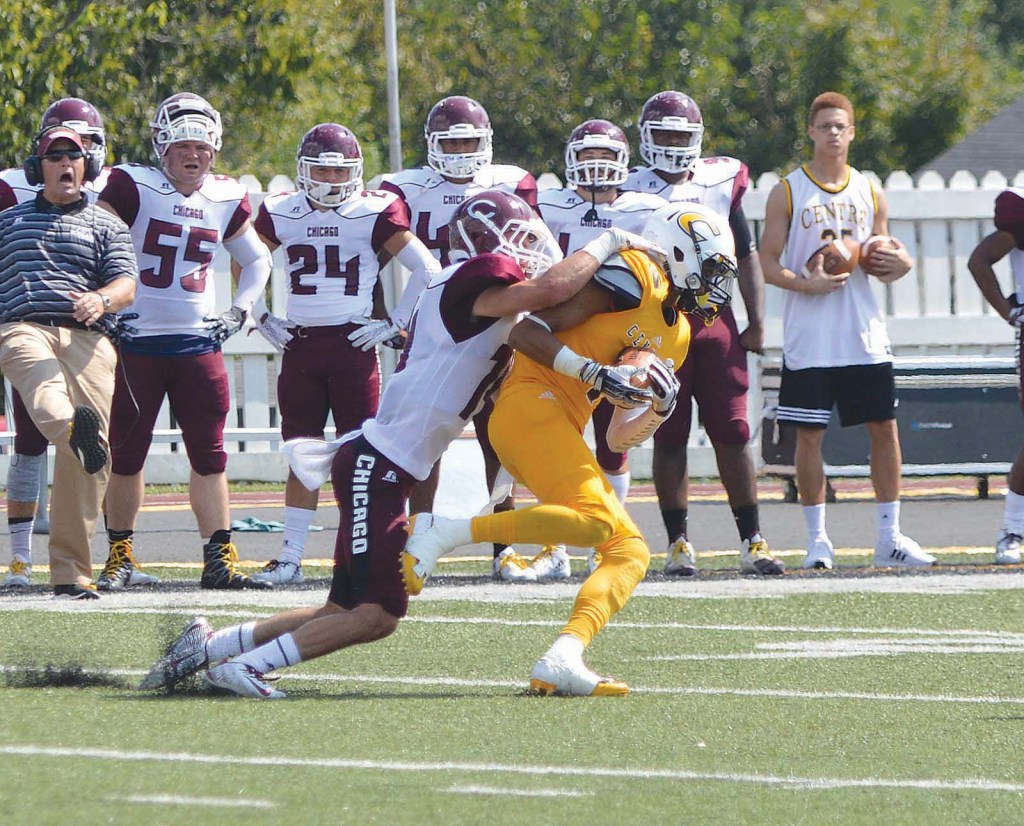 Jeremy Schneider/jeremy.schneider@amnews.com Centre senior wide receiver Rubyn Branch is one of 17 different players to catch a pass for the Colonels this season. The Centre offense is ranked in the top two in the SAA in points and yards per game.

After losing a first-place battle with Hendrix earlier this season, Centre football coach Andy Frye wasn’t too worried about the Southern Athletic Association standings, believing the conference champion would have one loss.

Frye’s prediction has come true over the last few weeks, and now four teams are tied atop the SAA standings with one loss — including the Colonels.

There are myriad scenarios of who could win the conference title, but the one that matters to Centre is this: if the Colonels win out, the worst that could happen is a shared conference crown but missing out on the automatic qualifier bid into the NCAA Division III tournament if Hendrix wins out; best case is a conference title and spot in the tournament if Washington beats Hendrix.

But first things first, the Colonels must deal with the challenges ahead, starting with Birmingham Southern at 2 p.m. Saturday in Alabama. The Panthers are 1-7 overall and 1-5 in the conference, but Frye said their record doesn’t represent the talent on the roster.

“I don’t understand why they are where they are, they’re skilled,” Frye said. “They might be the fastest team we face, they just don’t finish. They don’t seem to be playing with urgency any more.

“They released their coach and all the sudden, the pressure is off of them. That’s my fear. ”

The Colonels (6-1, 4-1 SAA) have won three straight over the Panthers, outscoring them 140-60 in those contests. And this year’s game appears to be headed in the same direction.

As good as the passing game has been, the deepest position on the roster is running back. Consider this — last year’s second leading rusher, Amoh Kumengisa, scored his first two TDs of the year in the win over Sewanee.

Five players average 20 rushing yards per game, and seven players have scored on the ground.

“At this level, you don’t have a lot of depth at many places, but we have a wealth of depth at running back,” Frye said. “We have four what I believe really good running back. I would stack our four up against anyone’s first one or two. They play fresh, we rotate them in. They all have their own style and they’re good at their style.”

The running game has benefitted from the emergence of the offensive line, an area Frye came into the season with questions about.

“We didn’t have a lot of experience on the line, but they’ve grown up quickly since the Hendrix game,” Frye said.

The one blemish on the Colonels record is the 35-28 road loss to the Warriors. Since then, though, Centre has outscored its next two opponents 89-31 and found itself a better team.

“Sometimes losses will expose your weaknesses and you have an opportunity to see where you can get better,” Frye said. “Our kids have taken control of that, thankfully.”

Another junior, wideout Jamal Watkins is seventh in the SAA with 109.5 all-purpose yards per game. His 21.3 yards per return average ranks fifth in the conference.

With all of the previously mentioned championship and playoff scenarios running around, it could be hard to keep the team focused on each step. And that’s understandable with their next two opponents — Birmingham Southern and Rhodes sporting a combined 5-10 record — before the regular season finale against Berry (6-1, 4-1), but that’s exactly what the Colonels need to do.