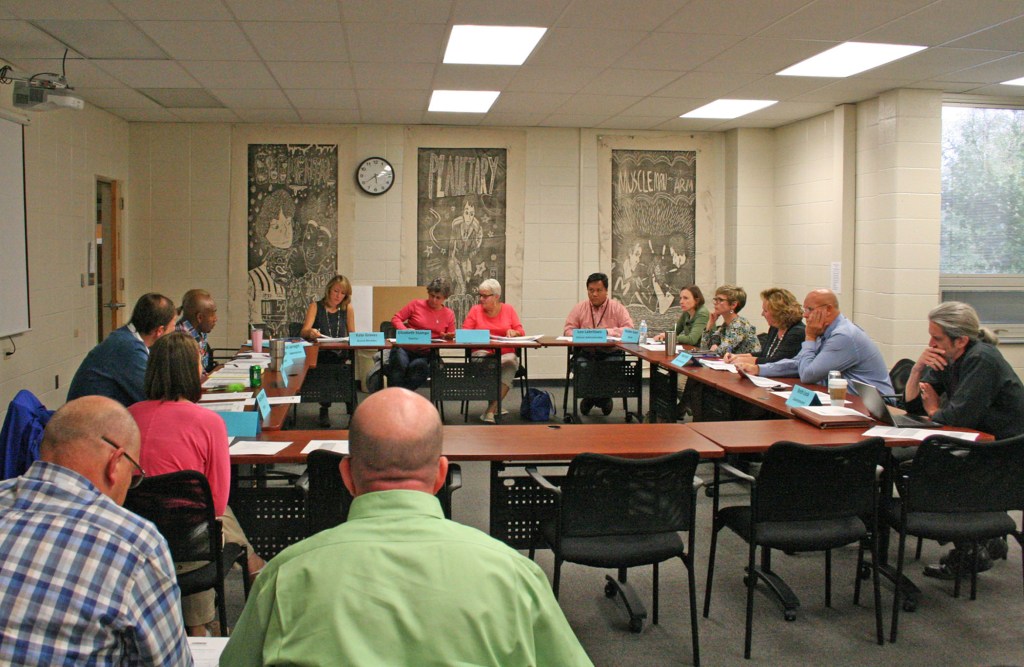 The Danville Schools Local Planning Committee met Thursday night to discuss the district’s plan for the future of its buildings, ultimately pulling a change on the plan — one different from what the district’s board of education wanted explored.

The committee began by discussing a plan that included a central office at Jennie Rogers Elementary, a preschool through fifth grade center at Hogsett Elementary and a kindergarten through fifth grade center at Toliver Elementary. The changes at Jennie Rogers and Hogsett would cost about $9 million under this plan, which had been sent to them from the Danville Board of Education for further review.

Board member and LPC member Kate Graves said she felt this plan best represented the requests made by members of the community. She cited a list of concerns, including the transition between buildings for the students, the driving parents of multiple children would have to make, maintaining a downtown presence while still maintaining a south town presence, and keeping the neighborhood school concept.

“Everybody wants to have neighborhood schools. The parents want that, the teachers want that,” said Elizabeth Stamps, committee member and retired teacher. “I think we need to keep that into consideration as we move forward.”

Earlier this month, the board of education voted against a plan previously submitted which turned Jennie Rogers into a central office and preschool facility, Hogsett into a kindergarten through first grade center and Toliver into a second through fifth grade center. To complete the work at Hogsett and Jennie Rogers would have cost an estimated $9.54 million.

Having a kindergarten and first grade center was an exciting thought for those teachers, said Heather Gover, a Toliver teacher and parent.

“The K-one teachers, actually, we were looking forward to having a K-one facility. We had gotten that in our minds, that was what the plan was going to be,” she said. Some of the teachers had visited an early learning facility for ideas. “There are just some things that I don’t think with another plan would happen.”

Things such as playgrounds and bathrooms, a cafeteria and a library, which would have smaller tables and chairs, more appropriate for the younger kids. It would allow for movement in the hallways, such as “walking like a bear,” theme-specific areas in the building, social rooms and more, she said.

“We’ve been getting excited about being together in one building. About being able to be together and plan,” Gover said. She also pointed to Jennie Rogers, which has some “overcapped” classes, and Toliver, which found itself in that position last year.

“If all the first grade classes are together, then you spread us out. You don’t have this issue of overcapping,” she said. “From a parent standpoint, I think about having neighborhood schools, that’s nice. And I think about having my children together in one building, K-five, and I see that has a benefit. I think from a K-one teacher standpoint, there’s a lot of benefits for a K-one school.”

The lack of concern for a transition between fifth and sixth grade was questioned by Patsy Clevenger, committee member, and Sheri Satterly, Bate Middle School principal.

“That is such a difficult age. There’s benefit of having them together, second grade through fifth grade, then they come in as a group to Bate Middle School,” Clevenger said.

“It’s been expressed it will add a transition for small children, and it will. But in my mind, if they’re all together, is it really that rough? They’ll all be together, they’re just moving buildings. They’re still with those same kids,” Satterly said. “If there was no class placement, we’re still transitioning them from one, maybe two teachers to having seven. And then throwing them with kids they don’t know, academically, socially.”

Graves said she understood both of those concerns.

“Heather, when I’m listening to you, I’m like, ‘That’s what I want, I want them to have a little-sized everything, because that sounds perfect.’ And I don’t like the transition at middle school. I want that for my kids too,” Graves said.

That transition from fifth to sixth grade is a common one, she said.

The younger transitions, she said, were a concern because people expressed a desire that they would keep their children at the Danville Montessori School longer, for example, to avoid that transition, or there might be a good chance of losing students from one transition to another, according to other parents.

Gover said having the students under this plan would take away the opportunity of having equal time downtown, because one group of students would be in walking distance while the other was not, one of the concerns expressed by parents wanting their children to be able to walk on field trips. Under other plans, all students would be downtown after they reach second grade and they would all be together prior to that, which might make busing easier, said Trish Jarnigan, a school administrator on the committee and a parent in the district.

Having two schools with such vastly different sizes was a concern, as under the plan Hogsett would house 400 students while Toliver would have 600 students.

“It was painful to close three community schools. And now that we have a 600-student campus, it’s not going back (to a community school) and when you have to draw the line … it’s a tough line to draw,” said Ed McKinney, director of pupil personnel. “One of the beautiful things about Hogsett was that tight-knit community feel. That wasn’t ever going to stay that, even if people thought that was going to happen, because you would have to redistrict and change.”

Without plans for a magnet or some other type of special school within the district, McKinney said, it will not be balanced financially, because the school of 300 will never be able to afford things in the way that a school of 600 will be able to.

“My fear is, unless there’s some well-thought-out plan of how we’re going to do this, it’s going to be a have and have-nots. Not based on what side of town but because one school has 600 they can afford more because of economy of scale. That will be a difficult thing for future board members, superintendents, DPPs. That’s not about us, we will figure it out. It’s going to be difficult financially,” McKinney said.

“I’m the principal of the smallest school in the district and I really have to claw and bite and fight my way for equitable service for our kids. We’re still held to the same standards that all the Danville students will have these things, and this opportunity and this field trip. I don’t see that is an equal playing field. I don’t see that is ever going to be an equal playing field,” Kelly said.

Another plan came with an estimated $9 million price tag: convert Jennie Rogers into a central office, Hogsett into a preschool through first grade center, and Toliver to a second through fifth grade center. Graves felt that did not answer the requests of parents and others that had spoken at recent hearings.

This was a plan most committee members agreed with, however.

“When we talk about the 1,800 students that we have in our school district and the roughly 150 per grade level, and we’re talking about one or two or three or four or five people’s concerns, I think we have to weigh that, too. Yes, it would be hard for those families that have to go to three different buildings to deliver kids, but we do have busing. We are still two miles apart,” he said.

Another big aspect, Labrillazo said, was that it would blend the students from all socioeconomic factors together, which is a big positive in his mind.

“All can benefit. The vision of one Danville Schools is very appealing to me. We have the opportunity to make the community one,” he said.

Satterly pointed out that there would be an equity of resources under this plan, which was the purpose of the original plan that had come under attack, the plan that was established when the Toliver project was launched.

Jarnigan, a school administrator on the committee and a parent in the district said she liked the plan because she wanted her children to be with their peers from the beginning — something of much greater concern to her than her children all being in the same building.

“I would rather have my daughter with her peers than with her brothers. It would be great if they were all in the same school together, but I’d much rather her be with all of her peers in the community that she plays soccer with, she plays basketball with, and get to know all of them, not just this group of her peers,” she said. “I would much rather my kid transition to second grade with the peer group she’s already with rather than go to sixth grade and now she’s got all these new people to learn and new teachers and she’s at Bate. It’s such a hard age anyway.”

Most committee members felt that the plan which placed preschool through first grade at Hogsett and second through fifth grade at Toliver was a plan better suited to the district’s needs. It passed in an 11-2 vote, with Graves and Stamps voting against the plan.

It will be submitted to the Kentucky Department of Education to be reviewed before returning to the district. A forum will be held, followed by a Local Planning Committee meeting to vote on the plan. If it passes, the plan will be sent to the Danville Board of Education for approval.

Mark Morgan was there on behalf of those against the Kinder Morgan pipeline project, as a pipeline runs through the front yard of Hogsett. Committee members wanted to know how dangerous that could be for students, and Morgan said it would be hard to tell, as this hadn’t been done before.

“Unfortunately, many of our homes, all of our schools. As far as the decision you’re making today about where to locate resources for the betterment of the kids … I think it unfortunately becomes a non-issue. I see the threat as equal at all of these locations,” Morgan said.

There were thoughts on building a new preschool through first grade center, but that didn’t gain a lot of ground due to additional costs that would entail.