Big second half propels Garrard to win at West Jess 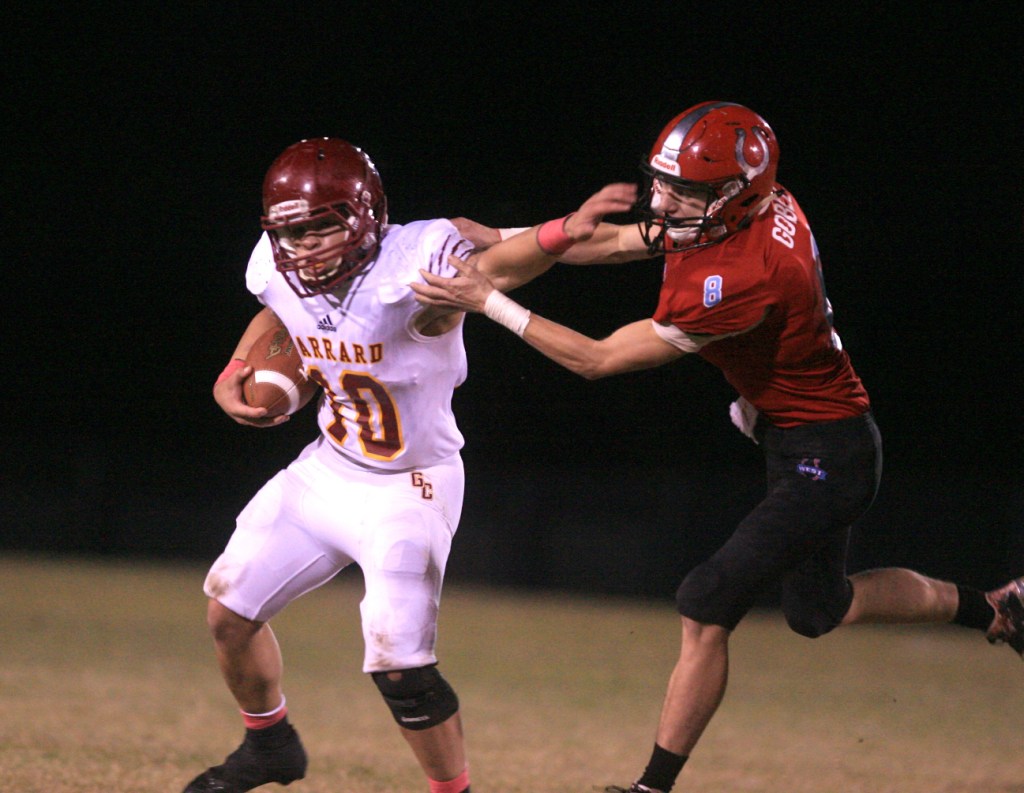 NICHOLASVILLE — Garrard County wrapped up the regular season on Friday with a 69-30 win at West Jessamine in what started out as a competitive affair and then subsequently morphed into a second-half blowout.

The game was an offensive firestorm all throughout the first half; a game plan that suited West more so than Garrard. As a result, West opened things up from the onset and set the tone on its very first play after quarterback Marcus Jones hit Jamesy Swentzel for a 63-yard touchdown pass that put the Colts up 7-0. Garrard then followed with a quick strike through the air on third down-and-19 to take an 8-7 lead.

The Golden Lions increased that lead midway through the first quarter on a 63-yard touchdown run by Josh Warren.

West rallied to even the game at 14 after Jones, despite two defenders in his face, found Stone in the back of the end zone. With both defenses struggling to contend with the myriad options on both offenses, the torrent of scoring continued into the second quarter.

Garrard regained the lead early in the second quarter after Jacob Foley scored the first of his three touchdowns on the night. But once again, West countered after Stone utilized his size to haul in a 26-yard touchdown pass to knot the game at 22.

“No. 1 and No. 85 are very good skill kids,” Garrard coach Jerry Perry said of West’s Swentzel and Greer Stone. “We’re not blessed with a ton of speed, we’re a rounded team. It’s a tough matchup. It’s a tough matchup for us when people are spreading us. We’re just not that skilled.”

Foley and Jones would both record another touchdown in the first half, which sent the two teams into halftime tied at 30.

“The first half went like our season,” Perry said. “We just had trouble defending. Once we got a few stops we were able to take control of the game.”

The third quarter ushered in consecutive three-and-outs by both teams, which was a deviation from the offensive onslaught on the first half. And much like how the game started, West was poised to strike first in the second half, but after Stone hauled in a Jones pass, he fumbled the ball as he lumbered unimpeded into the end zone.

The miscue proved to be West’s downfall.

Instead of a 37-30 lead, the Colts were now tasked with dealing with the punishing ground game of Garrard minus the momentum and the lead.

“We can move the ball on most people,” Perry said. “We have all year. That’s not a big shock. We just have to get some stops.”

Things quickly got out of hand for West as Garrard scored 39-unanswered points in third and fourth quarters that saw numerous flags, a West player ejected and several scuffles involving both teams.